Harold Pinter and ‘The Birthday Party’: Don’t let them tell you what to do…

by Jamie Andrews, Head of Culture and Learning. The Harold Pinter Archive is held at Add MS 8880 and free to consult in the Manuscripts Reading Room. For more information about the Lord Chamberlain's Plays, also available in the Reading Room, please see our collection guide. To learn more about the Birthday Party, click here.

Harold Pinter’s so-called ‘political phase’ is often seen to have developed in his writing during the 1980s. It’s certainly true that during this period ‘closed rooms open[ed] to an international community’, as the Chairman of the Nobel Committee put it during the award ceremony speech. But, surely, it is also the case that Pinter’s work has always been political: a challenging, provocative scrutiny of power relations and justice. In one of Pinter’s earliest full-length plays, The Birthday Party – recently revived in a starry revival at the Pinter Theatre in London’s West End and celebrating the sixtieth anniversary of its first ever performance this weekend – he writes what he will later describe as ‘one of the most important lines I’ve ever written’. In a strained plea to resist hierarchies and establishments of all kinds, a powerless Petey urges ‘Stan, don’t let them tell you what to do!’ as McCann tries to lead him out of the door of the coastal boarding house and into his car. Forceful from the start, the line continues to draw attention from critics and audiences, featuring prominently in many reviews of the recent production. 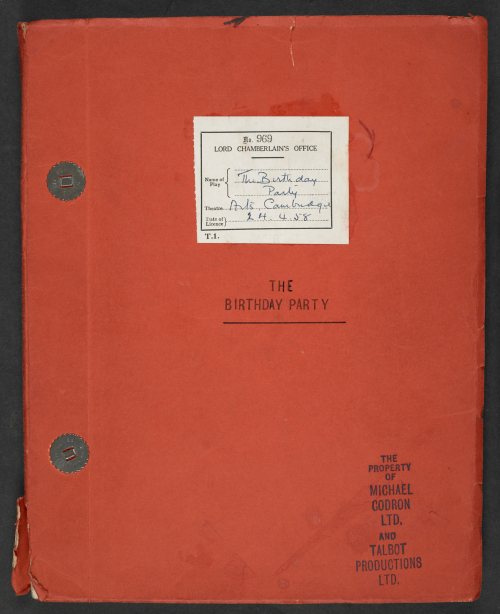 Yet when The Birthday Party was first performed, all new plays had to be submitted to the office of the Lord Chamberlain for so-called ‘licensing’- essentially pre-censorship. This set-up, of course, was exactly the kind of establishment hierarchy that Pinter battled throughout his career. After theatre censorship was finally abolished in 1968, the thousands of play-texts that had been submitted by writers over the years came to rest in the British Library. Looking at the draft of ‘The Birthday Party’ that was submitted to the Lord Chamberlain in April 1958 reveals a surprising difference with what we think we know of the play. The vital line—‘Stan, don’t let them tell you what to do!’ —, one of the most important lines Pinter had ever written is nowhere to be seen in the text. Instead, the play ends with a somewhat grotesque recourse to violence, when Stanley is struck on the side of the neck by McCann and knocked out (echoing the violent climax of ‘The Room’, his earlier short play).

In law, only the text as approved by the Lord Chamberlain could be performed, and it is not known when the famous line was added, although it does appear in the play-text first published by Encore in 1959, a year after its premiere. In theory, as no subsequent correspondence with the Censors is recorded, any addition of the line to the play would have been illegal…a rather delicious irony that I feel Harold would have appreciated.

Talking to The New York Times in 1988 about the importance of the legendary line, Pinter added: ‘I've lived that line all my damn life. Never more than now.’ Quite when, and how, the line came into being is uncertain. But from whatever moment it appeared, Pinter did adopt it as a design for writing…and living. He stood true to it ‘all [his] damn life’...and today, almost ten years after his death, and with ‘The Birthday Party’ still provoking and entertaining London audiences, the charge of its direct appeal (to Stanley…and to us) still resonates.