By Jerry Jenkins, Curator of Contemporary British Publications and Emerging Media. Artists’ Books Now is curated by Egidija Čiricaitė, Sophie Loss, Jeremy Jenkins and Richard Price. The next Artists’ Books Now evening will be held on 5th November at the British Library, with tickets available in the Autumn.

April saw the launch of Artists’ Books Now, a series of events to explore the artists’ book and its place in contemporary culture. The British Library has a significant collection of artists’ books and, in the nature of a national library, has not only many examples of its ‘brother’ and ‘sister’ forms – children’s books, poetry pamphlets, zines – it has centuries of examples of its ancestors (bestiaries, herbals, illuminated books, and so on).

From the outset the term ‘artists’ book’ seems to stimulate a range of questions and contradictions. Is it art or is it a book?  When is a book art, when a literary object, or a work of new information?  Can it be handled, thumbed through or should it be admired (even revered) from behind glass?

In the first evening, entitled “Here and Now”, the aim was to bring the artists’ book and the audience closer to each other, leaving the glass case behind. Indeed a central goal was to introduce the artists and their books directly to the public, bringing the artists’ own works to a live audience. It seemed to the curators of the event that this was one of the best ways to demystify the artists’ book.

Beyond the theatre-style ‘proscenium’ presentation of traditional events, the first Artists’ Books Now placed the books and artists at the centre of the audience, seated on three sides around two central book tables. This inevitably lead to some Brechtian craning of necks and audience members balancing in on window sills in order to view the proceedings, but the atmosphere was quite unlike conventional events, and we think all the better for it.

Following a welcome from the Head of Contemporary British Collections, Richard Price, who emphasised the continuities between artists’ books and other book forms held within the Library, the series host for the evening, producer of books and builder of publishing spaces Eleanor Vonne Brown, began introductions. 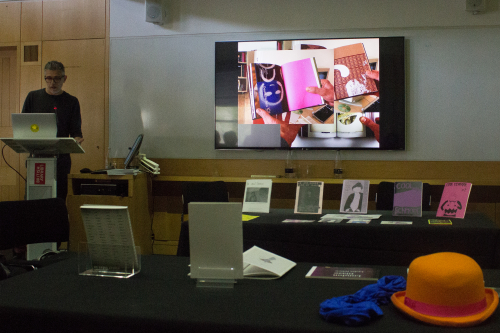 First to be welcomed was the visual artist and graphic designer Danny Aldred whose talk offered a whistle-stop tour of creative practice in artists’ books, noting, for example, the rise of the distinctive productions of the risoprinter in the contemporary practice of making artists’ books.

Eleanor then moved on to the first of the artists’ books tables, inviting us to share the work of maker of zines Holly Casio. Holly exhibited and discussed her passion for Bruce Springsteen with her series of zines, Me and Bruce Springsteen. 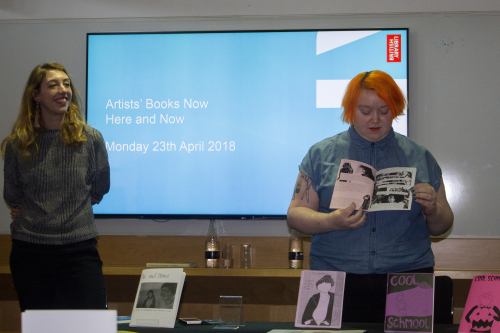 Under the surface of artists’ books there is a radical tornado of creativity, practice, vision, and rebellion, all of which feeds in to creating published works which many, including their makers, would not identify as artists’ books. The idea of Artists’ Books Now is not to worry too much about classification where there is clearly enough in common to share ideas and enthusiasm. Zines fully fit that bill: this was a presentation which reflected on class, sexuality, daughters and fathers, and of course, the Boss – all through the prism of the zine, with its own graphic traditions. 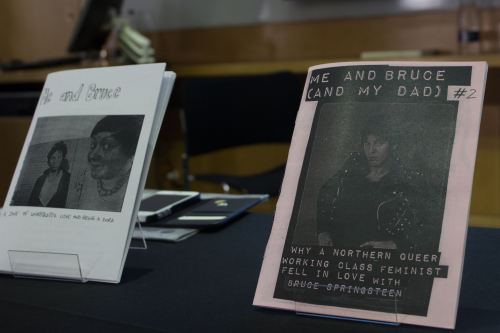 Visual artist and performer Lydia Julien talked us through her largely autobiographical works including Super Hero Washing Line in her artists’ book table. In her conversation with Eleanor, Lydia explained her use of sequences to grow a narrative based on lived experience. Following Lydia and Holly the evening adjourned to allow the audience the opportunity to more closely examine their work and talk to the artists themselves, again a break from conventional events and deliberately designed to get people closer to books. Lydia Julien explaining her work  during her section

Following the interlude Eleanor was in discussion with Gustavo Grandal Montero, from the library of the Chelsea College of Art, as well as an authority on artists’ books and concrete poetry. The ranging discussion came back to focus on the work An Anecdoted Topography of Chance which Grandal Montero  highlighted, for him, as a central work in speaking about artists’ books. 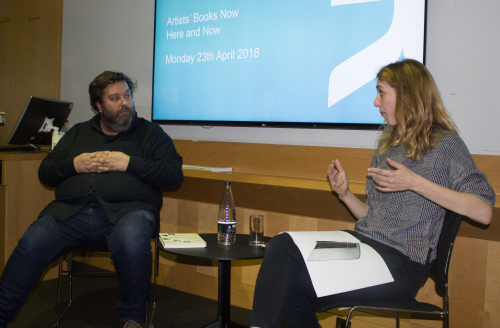 First in the final set of artists’ tables which Vonne Brown introduced were the works of Amanda Crouch. Amanda’s works cut across media in her journey to research and reimagine the digestive systems. This is far more spectacular than such a description might indicate: as Amanda talked through her extraordinary works, she also held them up, with the scale of the unfurling of one particular concertina’d work surely astonishing the audience, watching frankly in awe and wonder. 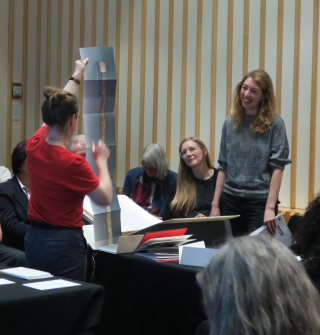 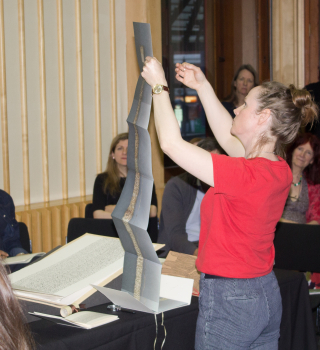 The final artists’ books table was that of artist and researcher John McDowall. John talked about making his work Atramentum (2012), a work which pools the inky contents (theoretically) of Robert Burton’s The Anatomy of Melancholy. Perhaps the result is a kind of dark almost overwhelming teardrop. For our event it was a fitting full stop, bringing the sessions neatly to an end. 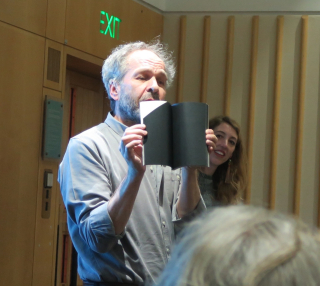 John McDowall displays an opening from Atramentum during his segment

Not a complete end, however, just a pause: the next Artists’ Books Now evening will be on the 5th November at the British Library.

Posted by Eleanor Dickens at 10:58 AM