Past Visions of the Near Future: The Afterlife of J.G Ballard’s High-Rise on London History Day

Historic England’s ‘London History Day’ implores us to “reflect on and celebrate the pioneering spirit, heroism, initiative and kindness layered in the city’s history”. A dedicated app developed for the day even allows its users, on walks through the capital, to experience its deep architectural and social histories in the form of archival materials – photographs, text, videos – which reach out from the slick, glassy world of their smart-phones and onto the streets. This activity, despite its peculiar newness, echoes the activities of Guy De Bord and the Situationists International in the middle of the twentieth century, who famously drifted through, re-purposed and re-interpreted their own over-determined and over-regulated urban environments. London History Day aims to open up the city to play and new interpretations, allowing people to imagine the areas where they live and work in new ways.

J.G Ballard, whose extensive papers are held at the British Library, was interested throughout his career in this interplay of urban and architectural spaces and individual and social behaviour; in the mutually constitutive relation between space and psychology often called Psycho-geography. London was particularly interesting to Ballard because of the tendency for its limitless appetite for space and convenience to sprawl and carve out liminal spaces at its edges. Airports, motorways and shopping centres were to Ballard what mountains, lakes and streams were to Wordsworth, both infinitely fascinating and utterly terrifying. These non-places represented an attempt to imagine a new form of pragmatic and manageable urban space which could be cleansed of its messy social, cultural and material relations. (Precisely the things which London History Day wants to bring to the fore). By bringing these so-called non-places into the realm of imaginative literature, Ballard was able shed light on what was already literally and figuratively over-lit; to finally see this world of bland uniformity which had tried to position itself as a vanishing point of the spatial, the ideological and the social.

In High-Rise (1975), Ballard’s narrator Laing seeks precisely this retreat from the messiness of urban life. His ‘over-priced cell, slotted almost at random into the cliff face of the apartment building’ situated presciently in London’s now-redeveloped Docklands, promises ‘peace, quiet and anonymity’ but delivers nothing but a ‘regime of trivial disputes and irritations’ which eventually leads to terrible violence, seeing him nonchalantly barbequing a neighbour’s Alsatian on his balcony before the first page is turned. What appears at first to be an escape, whether from the ‘rundown areas around [the building], decaying nineteenth-century terraced houses and empty factories already zoned for reclamation’ or from ‘crowded streets, traffic hold-ups, rush-hour journeys on the Underground’, becomes instead an amplification of these same petty frustrations borne of (perceived) inequality and merely living together. 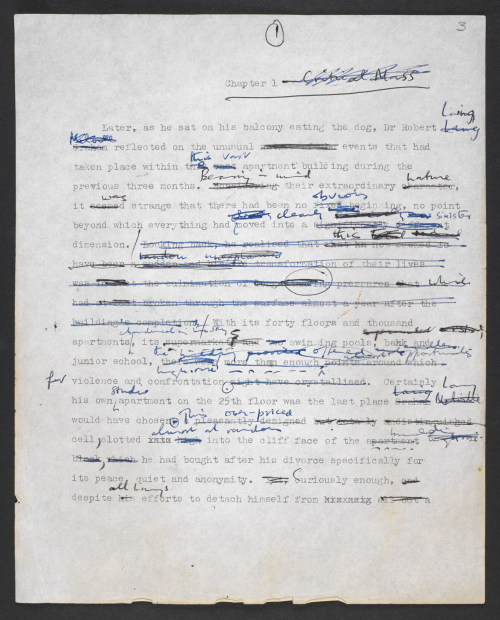 The first page of High-Rise in  typescript, heavily annotated by Ballard in 1974, with the famous first sentence already in place.

The ‘ragged skyline’ of the old city is visible from Laing’s 25th floor balcony, but it appears to him as an ungraspable spectre, an abstraction which ‘by contrast with the calm and unencumbered geometry of the concert-hall and television studios below him resembled the disturbed encephalograph of an unresolved mental crisis’. That this crisis remains unresolved is, we know, an understatement.

More recent Psycho-geographers have been criticised for typifying a barely concealed Romantic-colonial logic, of imposing themselves on an outer-world to which they claim to be preternaturally sensitive. Laura Oldfield Ford is a contemporary Psycho-geographer working against this, in a mode which is highly critical of the so-called ‘yuppie-dromes’ which Ballard imagined in High-Rise and which now dominate the former wastelands of London’s in-between districts. Her zine collection Savage Messiah (Verso, 2011) takes the form a kind of textual augmented reality walk. Oldfield Ford’s fragmented narrator appears as a simultaneously direct and distant, personal and impersonal guide through London’s rapidly gentrifying liminal outskirts. These spaces are haunted by the spectres of past communities, enclaves, subcultures and alternative ways of living which have been swallowed, or are being swallowed up, by the Ballardian logic of the high-rise. Even the form itself, a kind of kitsch but sincere punkish collage, seems to be possessed by the voices of (im)possible futures, utopian social movements subsumed under the utopian dream of the post-social.

It’s this ghostly quality which so often surfaces when the deep social history of urban space, so often obscured by the new, is brought to the fore. A walk through Soho on London History Day, smart-phone in hand, will transport the drifter to a haunted neighbourhood of queer resistance and play. Some will turn off their phones and look carefully around them, at the almost total commodification and unviability of present reality in one of London’s most expensive districts; they will see chain stores, luxury apartments and calculated, cynical seediness everywhere. For some it will even give way to a sense of mourning, perhaps even a desire to live in that world – the world of ghosts, of an imagined past. But for others, hopefully, it will inspire a sense of possibility and a way to creatively re-think what living in cities – that is, living together -- might mean in the future, even as the ragged skyline of the past recedes from view.

Posted by Eleanor Dickens at 5:47 PM