Introducing the Women of Windrush 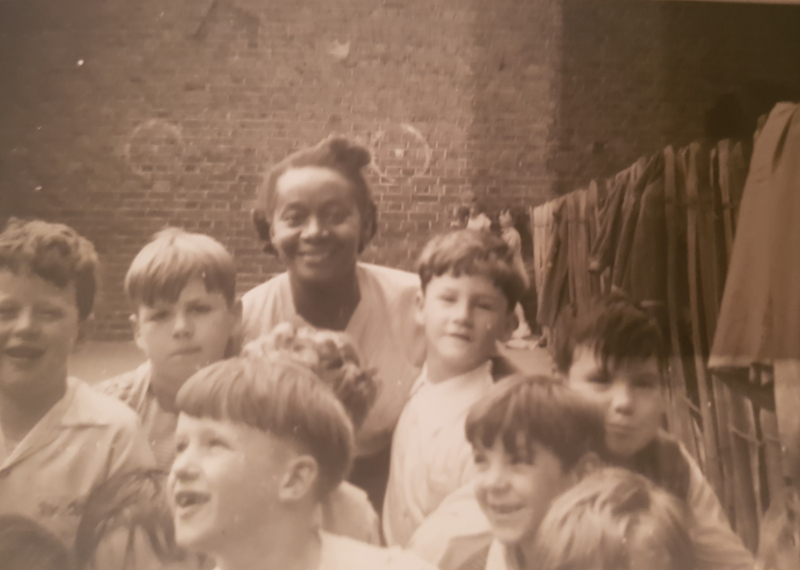 Guyana-born writer and teacher Beryl Gilroy with her pupils, image courtesy of the Estate of Beryl Gilroy.

On Monday 25 June the British Library in association with Wasafiri, the Magazine of International Contemporary writing, will be hosting Windrush Women: Past and Present. When the Empire Windrush sailed from the Caribbean 70 years ago, there were 257 female passengers on board, 188 of whom were travelling alone. There are many stories missing from the Windrush narrative, not least those of bold and pioneering women, leaving everything behind, to better their own and their family’s lives. This evening of poetry and readings will launch the latest issue of Wasafiri, which features a special section on Windrush women from across the generations.

Wasafiri's Editor-in-Chief, Susheila Nasta, says: ‘For better or worse, the stories of the post-war Windrush generation have become more than evident in recent months. Though little known, there were women on board the SS Windrush as well as the other boats that sailed after the second world war. The experiences of the women were as varied as their ages and backgrounds. Join Wasafiri, the Magazine of International Contemporary writing, to hear the voices of Windrush women across the generations and find out more about their lives as well as the complex challenges they continue to face’.

Appearing with Susheila on Monday will be Valerie Bloom, Jay Bernard, Maria del Pilar Kaladeen, Alison Donnell, Hannah Lowe, Catherine Ross and Susheila Nasta. Tickets are still available from the British Library Box Office. As an introduction to Monday’s event, we are publishing here an excerpt from Susheila Nasta’s editorial from Wasafiri No 94.

If this whets your appetite for Caribbean women’s writing, there is more to see (and hear) in the Library’s free exhibition Windrush: Songs in a Stange Land which continues in the Entrance Hall Gallery until 21 October. On display are Beryl Gilroy’s long-lost manuscript for her novel In Praise of Love and Children (1996), Andrea Levy’s working drafts of Small Island (2004) and Jean Rhys’ revisions to Wide Sargasso Sea (1966); plus migration memoirs from Floella Benjamin and Verona Pettigrew and performances by poets Louise Bennett (reading her brilliant patois poem ‘Dry Foot Bwoy’ about a haughty Caribbean man putting on an upper class English accent), Grace Nichols, Hannah Lowe, Maggie Harris, Kim O’Loughlin, Marsha Prescod and Merle Collins. These literary legacies of Windrush are interspersed with recordings of Caribbean women speaking about all aspects of their lives, from working in the NHS to the difficulties of courting in England compared with back home, and music too – there is much in the exhibition to investigate, explore and be inspired by.

‘History, as James Baldwin once famously observed is not the story of the past but the present. Coinciding with the seventieth anniversary of the docking of SS Empire Windrush at Tilbury in June 1948, this issue shows us how the many global intersections of Britain’s mixed cultural past continue to reverberate in today’s migrant present. When Andrea Levy’s award-winning historical novel, Small Island, first appeared in 2004, it was applauded for its fictional portraits of the forgotten voices of ‘Windrush’, for bringing the nation’s post-war migrant history centre stage and its timely intervention into what had largely been a male founding narrative of arrival and settlement. Reviewers were often unaware of earlier Caribbean and black British fictions of this era; whether classics, such as The Lonely Londoners (Sam Selvon, 1956), The Emigrants (George Lamming, 1954) or, more significantly here, given the objective of our special section focussing on ‘Windrush women’, Beryl Gilroy’s belatedly published 1950s novel, In Praise of Love and Children (1994). Despite such gaps, the appearance of Small Island was significant; not only was Levy, herself a daughter of Windrush, presenting her story through a range of narratives – male and female, Caribbean, Irish – but its engaging depiction of Britain’s diverse migrant histories began to touch a wide public readership — I once saw over five people reading the paperback version in one carriage on the London Underground just after the novel’s winning of the Orange Prize was announced. Interestingly Levy’s title, which playfully signalled Britain’s shrinking post-war global status – once ‘great’ empire, now ‘small island’ – was not only powerfully ironic but remains prescient, especially given ongoing Brexit debates over a decade later around ‘Englishness’, national identity, the rights of belonging or leave to stay. There is no doubt, as Grace Aneiza Ali and many of the other contributors to this issue differently observe, that migration continues to be the ‘defining moment of the modern era’ and ‘few’ can be ‘untouched’ by its ‘sweeping narrative’.

‘Highlighting the diversity of the period of migration following ‘Windrush’ and looking within and outside the parameters of what still figures as a powerfully constructed icon, this issue brings together Caribbean and black British voices from across the generations. Loosely defined here as the ‘Women of Windrush’, our special section comprises a range of genres and a mix representing the contemporary writing and works from past generations. It is a small sample which is by no means representative or comprehensive. Hannah Lowe’s feature-interview with three contemporary poets (Grace Nichols, Karen McCarthy-Woolf and Jay Bernard) points to the icon of ‘Windrush’ as ‘that huge fiction of a ship’ (Jackie Kay), a fiction which continues regardless to impact on many imaginations. In interrogating the enduring legacy of this myth, we feature an extract from Beryl Gilroy’s pioneering novel, In Praise of Love and Children, as well as providing the transcription of two interviews, originally conducted at the ICA in 1986, to celebrate the publication of Gilroy’s Frangipani House and a first novel, Timepiece by Janice Shinebourne. Like the 2004 moment when Levy’s Small Island was first published, the mid-1980s was a critical period for the publication of black and Asian women’s writing in Britain. Publishers influenced by the success of African-American writing in the US began to see the migrant black experience in Britain as a potentially profitable market. And it was at this moment that adventurous publishers such as Virago and the Women’s Press began to commission anthologies such as the groundbreaking Watchers and Seekers (edited by Rhonda Cobham and Merle Collins, Women’s Press, 1987).This volume of stories, essays and poems, featuring only the work of women, included, amongst many others, now well-known writers such as Collins herself, Amryl Johnson (who sadly died in Britain in 2001), Meiling Jin and Valerie Bloom. Above all, it was a moment when black women writing in Britain began to get the long-awaited recognition they deserved. Too often anthologised or out of print, the many women who contributed to such vital anthologies are not always remembered. Moreover, as Maria del Pilar Kaladeen’s memoir ‘Windrushed’ painfully evokes, amnesia was generated not only from without, but from within, as some of the older generation chose to sidestep their own histories, shrouding their own pasts from their black British offspring.’