A guest post by artist Liz Mathews describing the inspiration and process behind her recently acquired book, The Strand of the Thames, as part of World Refugee Day.  For more information about Liz Mathews' work, including Paper Wings -- a collaboration with Maureen Duffy -- see her gallery blog, Daughters of Earth. 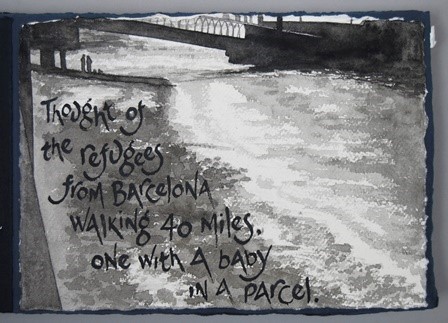 Wednesday 23 June 1937
I went shopping, whitebait hunting to Selfridges yesterday, & it grew roasting hot, & I was in black ... As I reached 52 [Tavistock Square], a long trail of fugitives—like a caravan in a desert—came through the square: Spaniards flying from Bilbao, which has fallen, I suppose. Somehow brought tears to my eyes, tho' no one seemed surprised. Children trudging along; women in London cheap jackets with gay handkerchiefs on their heads, young men, & all carrying either cheap cases, & bright blue enamel kettles, very large, & saucepans, filled I suppose with gifts from some Charity—a shuffling, trudging procession, flying—impelled by machine guns in Spanish fields to trudge through Tavistock Square, along Gordon Square, then where? —clasping their enamel kettles.  -- The Diary of Virginia Woolf, Volume 5 1936 - 1941

Virginia Woolf's chance sighting of refugees from the Spanish Civil War in London at midsummer 1937 brought tears to her eyes - 'tho' no one seemed surprised' - and burnt on to her mind's eye an unforgettable image: children, women and young men driven from their country by war, trailing homeless, displaced, dispossessed through the Bloomsbury Square that was her home. This sight, with its implications and consequences, was to return to her vividly on another solitary walk many months later in the winter of 1939:

Tuesday 31 January 1939
Took the bus to Southwark Bridge. Walked along Thames Street; saw a flight of steps down to the river.  I climbed down—a rope at the bottom. Found the strand of the Thames, under the warehouses—strewn with stones, bits of wire, slippery; ships lying off the Bridge (Southwark? —no, the next to Tower Bridge [London Bridge]). Very slippery; warehouse walls crusted, weedy, worn. The river must cover them at high tide. It was now low. People on the bridge stared. Difficult walking. A rat haunted, riverine place, great chains, wooden pillars, green slime, bricks corroded, a button hook thrown up by the tide. A bitter cold wind. Thought of the refugees from Barcelona walking 40 miles, one with a baby in a parcel. 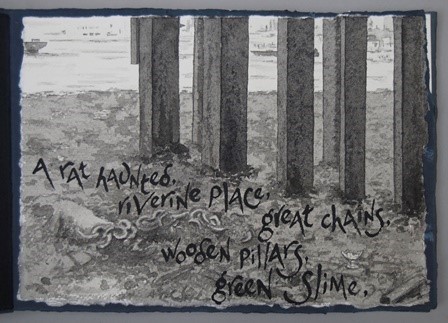 These two entries from her extraordinary diary - both so observant of detail, so evocative of the physical setting and of her state of mind - stayed with me, and I was reminded of them in Gordon Square one afternoon some 70 years later, like Woolf combining shopping - but not for whitebait - with a walk through Bloomsbury observing the London summer.  We, too, met small groups of refugees, some aimless, some more purposeful: one grizzled man sitting on a box playing a melancholy Balkan air on a battered accordion, one old woman in black sitting on the pavement outside the Co-op, her hands joined in the international gesture of supplication, one young man on a bench in Gordon Square who, when we'd given him some change, asked hopefully if we would buy him a mobile phone, another older man - speechless, wordless, with hunger and despair in his eyes.

Virginia Woolf's discovery under the warehouses was the inspiration for my artist's book, Strand of the Thames, which has recently been acquired by the British Library. In setting this text, the sense of history repeating itself was very strong for me. My partner Frances and I are inveterate mudlarkers, and the Thames low-tide beaches between Waterloo and Southwark Bridges have long been a favourite haunt, yielding a rich and often rather pungent harvest of driftwood, eternal claypipes, button hooks, and yes, the green slime that Woolf observes, along with the occasional shard of ancient terracotta or exquisite porcelain. One sunny winter's day in 2009, we followed Virginia Woolf on that sacred bus-route and then in her footsteps, choosing our time so that the river would be at low-tide, seeing the sights that she saw - still all there - and reminded inevitably of the other sight she had recalled in that place - perhaps by the river itself, running through time and linking all our days. I photographed each stage of her journey, trying to catch something of the transient light on the water, the darkness of the slippery flight of steps, the ships lying off the bridge, the solid ironwork of the bridge itself, the crusted warehouse walls, just as weedy and worn, the great chains, the immensity of the wooden pillars and the curious sense of separation from the bustling world of the city. We looked for and found the bits of wire, broken glass, stones and chains. We slipped on the ancient wharf stones, smelt the green slime, flinched at the bitter cold wind, and felt ourselves at some unimaginable distance from the clear-lit city we could see through the wooden pillars. 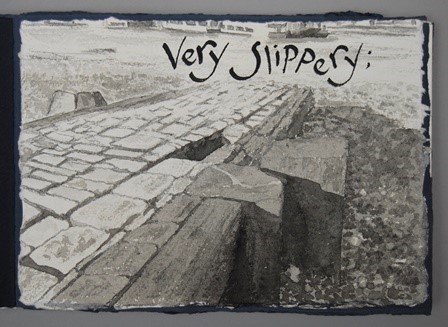 And at the end of our walk together, with the winter sun low on the water silhouetting a couple deep in talk with their patient dogs waiting beside them, we too thought of the refugees, Virginia Woolf's fugitives, homeless exiles with their precious burdens and their useless well-intentioned charity kettles fleeing from machine guns to our home city, and as she says - then where?

Back home in my studio, I translated the photos into 15 grisaille watercolours on sheets of rough handmade paper approximately 21 x 30cm. To draw the material presence of the river itself into the views, I mixed the watercolour paint with Thames water, drawn in a jam-jar from the river as Turner did, and I used a small driftwood stick - picked up on the strand, carved by the tides into a rudimentary nib - as my pen, dipped in ink made from the same paint and Thames water. I looked for individual textures, flaws and quirks of the handmade paper pages that I could use to reflect aspects of the text - for example, the page with the strewn-about stones and bits of wire has a gnarled knotted fibre within the fabric of the paper that I just highlit with paint to embody a bit of wire, so that you can feel it with your fingertip; similarly the textured paper surface produces either a flickering effect of light on water when painted with a fairly dry brush, or the chiaroscuro of stones and rubble when painted with a wet one, as the liquid paint puddles darkly into the shadowy hollows between small raised clumps of paper-pulp. (This kind of paradoxical effect that materials can produce unexpectedly is the sort of thing that fascinates me - I enjoy collaborating with materials in making a physical embodiment of the words, allowing the materials and the words to do their own thing.) 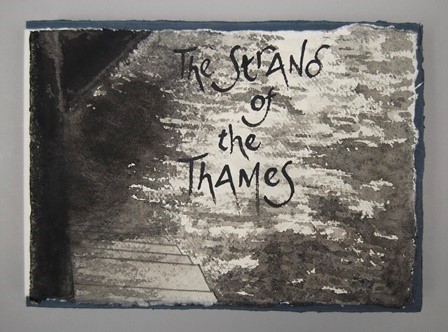 After I'd made the paintings and lettered them, I constructed the lettered images into a battered book made from black handmade paper like our grandparents' photograph albums with their precious wartime portraits and sepia views. And then I made a quarter-size (10 x 15cm) facsimile edition (limited to 20 signed and numbered copies), identically constructed, with the grisaille images re-translated back into black and white photographs, fixed to the album with acid-free photo-corners. The original and one of the edition copies is now in the British Library's permanent collection. Most of my work is one-off, but a few of my artist's books lend themselves well to editions; and this is one of them, where the photo-album concept gives a reference point for both the original and the edition, and a uniting rationale. As an artist, my concern is to make work where form and concept are fully integrated, where words and images are as one, inseparable, rather than co-existing as text and illustrations. Typically, this results in books and artworks whose individual material form is of its nature an expression of the text and therefore difficult or impossible to reproduce; but I do like to enlarge the scope of my books in terms of audience and affordability where it's possible to do so without compromising their integrity, particularly where, as here, the edition adds another aspect to the original, and enhances the meaning of the work.

I have shown Strand of the Thames at many of the artists' book fairs I've been to in the last 10 years, each time hoping that it won't still seem as though nothing changes - that we will have found an answer better than the metaphorical enamel kettles. And every time, with each audience, this book really strikes a chord with people, and together we say again 'Nothing changes', and we honour Virginia Woolf for her engagement with her world, her refusal to ignore the plight of her fellow humans, her recognition of their humanity and her un-fatigued compassion in weeping for dispossessed exiles seeking refuge in Tavistock Square.

Posted by Eleanor Dickens at 10:29 AM