By Callum McKean, Curator of Contemporary Literary Archives and Manuscripts. The James Berry Archive, which was acquired by the Library in 2012, is comprised of twenty-eight boxes containing drafts, notebooks, diaries, correspondence and audio-visual material spanning Berry’s fifty year career. Further details about the acquisition can be found here. A conference on Berry’s work will be held in the Knowledge Centre on 5th October 2018, with information and tickets available here. Details about the exhibition, Windrush: Songs in a Strange Land, containing items from the James Berry Archive, can be found here. 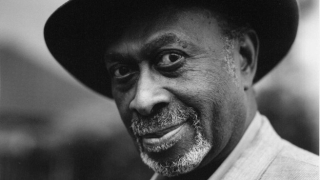 James Berry’s earliest short stories are not often read together. Despite being published in various popular magazines in the late fifties and early sixties under the name J. Raglan Berry, they remain uncollected and disparate, available only to those proficient in database searches or willing to trawl through microfilm reels. For a cataloguer, tasked with describing a large cardboard box filled with stacked manila binders, each containing annotated typescript drafts of this early work, the experience is very different. Rather than reading each story as a distinct, atomised unit, a structure starts to emerge as they are read one after the other. The familiar rhythm of something being compulsively worked out, again and again, begins to take hold. These are stories about new arrivals to the so-called Mother Country, what they see and how they are seen. But, perhaps more fundamentally, they are stories about encounters; personal, cultural and material collisions parsed out with emotional incisiveness and critical intelligence. In one story, a young factory worker is paralysed by memories of her home island as she stands on the precipice of a cavernous canteen in her new place of work with all eyes on her; in another, a West Indian cricket player becomes an inadvertent focus for English gawkers as he prepares for a match; and in yet another, a young family moving in to a west London flat are met with their new neighbours’ quintessentially English hostility – at once veiled and virulent. One thing which makes these stories of cross-cultural encounter uniquely Berry's, though, is a hard-won commitment to progress; a need to move beyond identifying friction towards something like easing it. In these early stories such a zealous commitment to resolution can sometimes come at the expense of realism: factory workers, cricket players and new neighbours all turn out to embrace the newcomers, in different ways and on different terms, in the end. The short story form – crammed into the columns of popular magazines – is sometimes felt to bring everything together too quickly and easily for Berry’s sense of the complexity of these meetings. 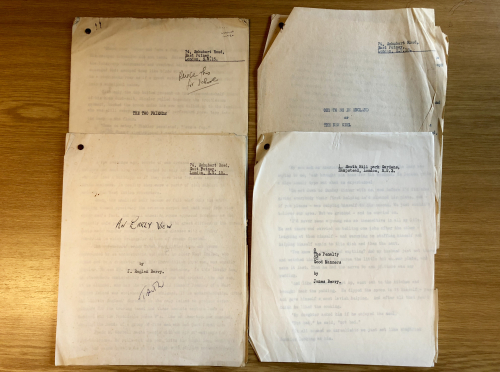 Given space, though, Berry’s later work takes a different approach, particularly in his most famous and final poetry collection, Windrush Songs (2007) – now on display in the Library’s Entrance Hall as part of the exhibition which echoes its title, Windrush: Songs in a Strange Land. In this collection, taking on this most mythical of cross-cultural encounters, Berry manages to maintain a voice which is gritty, complex and poly-vocal without ever losing his commitment to resolution, however difficult. If the metonymic ship in the collection’s title (and on its front cover) is ever to plot a successful course for the future, it must first take detailed readings of the past and present in order to adjust for the direction and speed of present travel. The ship’s on-board instrument, language, must then be wielded with extreme sensitivity and acuity. In this way the elegance of the slim volume published by Bloodaxe betrays the massive volume of draft material, amassed over a period of more than ten years, which went into its production. The reams of draft material for Windrush Songs, present in the archive, reveal a practice which was both precise and open-ended. Individual poems are revised daily in a routine which comes to resemble the mantric, meditative practices which interested Berry so much throughout his life and which he wrote about in his personal diaries and notebooks. But as well as being precisely constructed these poems are also amorphous in draft form, blending into one another, taking on new titles, merging, exploding in size and significance only to fade into the background and re-emerge later, recognisable only as a trace. This combination of fluidity and fastidiousness can make the cataloguer’s job more difficult but, as is so often the case with creative archives, what is most difficult for a cataloguer to pin-down often proves to be of the greatest interest to potential researchers. 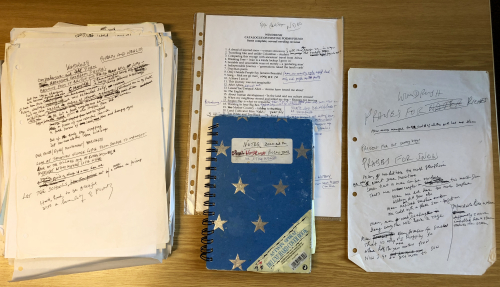 As well amassing his considerable literary output, Berry’s archive is also a fascinating piece of social history for those interested in the generation of people who left the Caribbean for England in the late forties and early fifties. (Berry himself left Jamaica on the ship after the Windrush, the SS Orbita). In the Library’s exhibition, a photo taken from Berry’s archive showing him at work as a labourer in the United States during the Second World War is intended to unravel the idea of the rural islander travelling for the very first time to unknown shores – Berry and many others from the Caribbean had visited and lived in the US, Canada, and even England before the Windrush set sail. Although the notebook which he carried during this period -- which he thought of as representing the birth of his impulse to write -- does not survive, his pocket-diary from this period does. This little leather-bound pocket-book gives a unique insight into the places Berry lived, the people he met, as well as providing some personal ruminations on life in America. Equally, long-form personal letters from family members in Jamaica, sent after Berry moved to London, provide comments on his burgeoning writing from a Caribbean perspective, send personal encouragement, give news, and fill out a deeply intimate sense sense of the ways in which familial closeness was maintained over long distances during this period of mass migration. These highlights only scratch the surface of Berry’s archive, which also includes correspondence with key figures in Caribbean literary circles, unpublished or hard to find non-fiction essays , talks for TV and radio, as well as material related to his prolific childrens’ writing and his time as a writer in residence at Vauxhall Manor School. All of the material highlighted here, and much more, will be available to researchers in the Manuscripts Reading Room in late 2020.