By Catherine Angerson, Curator of Modern Archives and Manuscripts , on the bicentenary of Emily Brontë’s birth. Brontë’s ‘Gondal Poems’ notebook is currently on display in the British Library’s Treasures Gallery in London. You can read more about Emily Brontë, her manuscripts and works on our Discovering Literature website.

As children, Charlotte, Branwell, Emily and Anne Brontë created imaginary countries and kingdoms for their toy soldiers. Their games and plays evolved into epic tales which they recorded in writing and charted on maps. While the two eldest surviving Brontë siblings, Charlotte and Branwell, created the kingdom of Angria, Emily and her younger sister Anne, invented their own world called Gondal. None of Emily and Anne’s ‘Gondal Chronicles’ in prose have survived, but a remarkable notebook of ‘Gondal Poems’, copied out by Emily from earlier drafts between 1844 and 1848, has been used as a source for reconstructing the saga. The poems are not just remnants of the fictional world of Gondal; they are also expressions of lived experience. Nature, love, loss, death, and desire are some of the themes of the Gondal poems.

Emily began copying her poems into the ‘Gondal Poems’ notebook, and a second untitled notebook, in February 1844. Many of the poems were composed several years earlier. The first poem is dated 6 March 1837 when Emily was 18. Her novel, Wuthering Heights, was published in 1847 and she carried on writing in the Gondal notebook until 13 May 1848, just a few months before her death from tuberculosis at the age of 30. 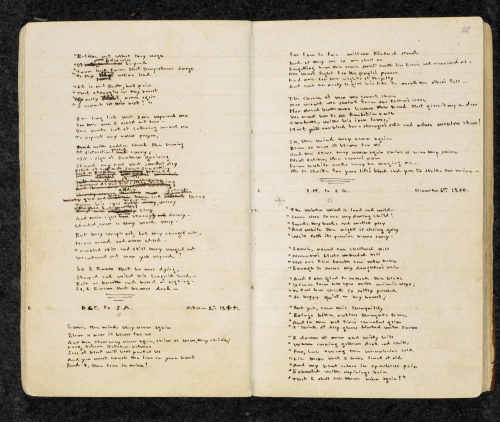 Known as the shyest of the Brontë siblings, Emily did not accompany her sisters Charlotte and Anne to meet the publisher of their poems in London in July 1848. She had, however, agreed to the publication of 21 of her poems, pseudonymously in Poems by Currer, Ellis and Acton Bell (1846). Six of the 44 poems in the Gondal notebook were included in this volume. Emily judiciously removed references to the private world of Gondal and its inhabitants before the poems were published.

In Emily and Anne’s mythical world, Gondal is an island in the North Pacific. The Gondals have recently discovered the island of Gaaldine in the South Pacific. Gaaldine has a tropical climate, palm trees and bright blue skies, while the windswept and snowy landscape of Gondal is reminiscent of the Yorkshire moors. The saga can be interpreted as a fictional reimagining of British colonialism represented by the Gondals, or as Christopher Heywood has argued, an allegory of Anglo-Irish conflicts throughout the ages. The sisters had access to a wide range of books and periodicals in their Irish father’s library at the Parsonage in Haworth. 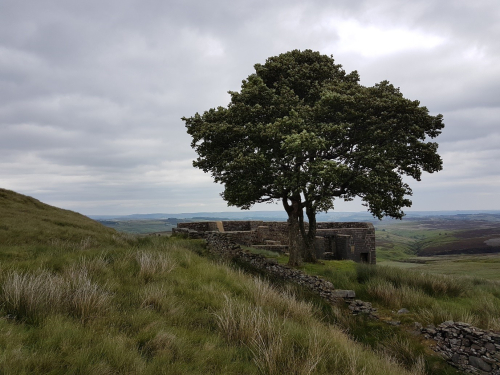 Emily’s poems share the emotional intensity of Wuthering Heights, her more famous creation. The Gondal Poems notebook is currently on display in the British Library’s Treasures Gallery alongside one of Charlotte Brontë’s notebooks of Angria tales. Emily’s notebook is open to display folios 3 (verso) and 4. Although the manuscript poems have been called ‘fair copies’, many contain crossings-out and changes, as Emily edited her poems during the process of transcribing them.

The poems ‘A. G. A. to A. S.’ and ‘To the bluebell’ can be seen in full on these two pages. ‘A. G. A.’ are the initials of Augusta Geraldine Almeda, the heroine of the Gondal saga who becomes the Queen of Gondal and has several love affairs. Here she mourns the departure, or death, of a loved one:

"O wander not so far away!

It may be sad for thee to stay

But how can I live lonely here?" 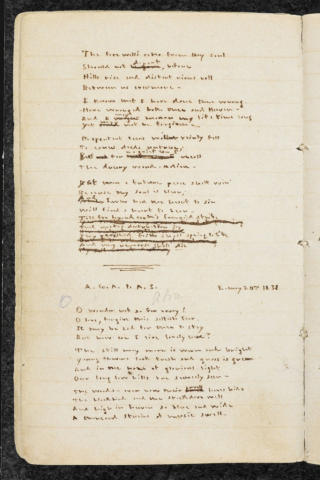 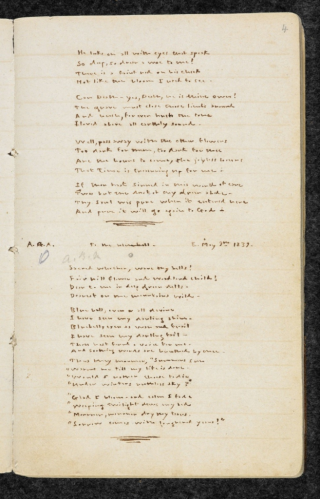 Today we celebrate Emily Jane Brontë’s short, passionate and creative life, and the works and traces that she left behind. ‘To the bluebell’ (pictured above) describes the short blooming life of a blue bell. The poet, having experienced so much death and loss in her own life, is consoled by the ‘soothing words’ of the woodland flower:

“Glad I bloom - and calm I fade