by Alastair Horne, a Collaborative Doctoral Partnership PhD student based at the British Library and Bath Spa University. His research explores how mobile phones are changing storytelling.

The launch of the iPhone in June 2007 marked a turning point for mobile phones. It transformed the smartphone, previously a business tool exemplified by the dull but effective Blackberry, into a desirable consumer product. This transformation was embodied in the phone’s most striking feature: on a Blackberry, the screen shared the front of the phone with the physical keyboard that had given the device its name, its keys resembling the drupelets of a blackberry; on the iPhone, that screen had now consumed the keyboard to occupy the entire front of the device.

This symbolised the smartphone’s conversion from a tool for writing emails to a consumer device: one on which media could be consumed easily and pleasurably. That is one of the reasons why I take the iPhone’s launch as the starting-point for my research, which explores how storytelling – the kinds of stories we tell, and how we talk about stories – is being transformed by these devices and their affordances: their connectivity and ability to respond to our input, their capacity for playing different kinds of media, and their portability and the fact that they know where we are.

These highly capable devices seemed a world away from the first mobile phone I’d owned when working as an English teacher in Japan at the turn of the millennium, its tiny square screen able to display maybe a hundred or so characters, and its twelve or so keys rendering typing an awkward, sometimes painful experience. And yet as my research progressed, I discovered that these very basic phones had given rise to their own kind of mobile-specific storytelling, which had some surprising elements in common with the new kinds of stories I was examining. 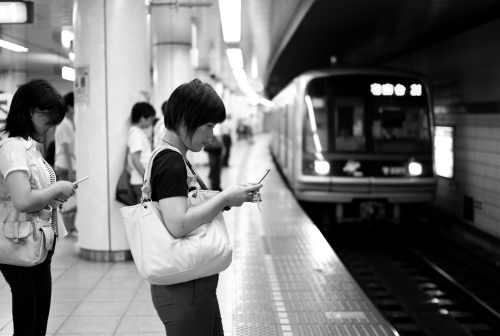 The first mobile phone fictions had begun to appear even before I left Japan in 2001: the first, Deep Love, was written by a former teacher who posted it to his mobile-friendly website in 2000, using the pseudonym Yoshi. Telling the story of a seventeen-year-old schoolgirl who takes up prostitution to pay for an operation for her boyfriend, and dies after contracting HIV, the novel established the template for the stories that would later form the cellphone novel genre: colloquial and confessional in tone, like the messages people were used to reading on their phones; dark, sensational, and sexual, in content.

The cellphone novel – ‘keitai shousetsu’ in Japanese – had two parents: the long and crowded journeys silently endured each day by Japanese commuters, and the enthusiastic adoption of comparatively advanced mobile phones by the country’s young people. Serialised in short chapters of between fifty and a hundred words that could be downloaded quickly and cheaply and read between stops, these stories rapidly became a massive participatory phenomenon in Japan. Inspired by Yoshi, thousands of Japanese people began to publish their own stories using homepage building sites – the local equivalent of Geocities – which responded by developing templates to suit these new types of serialised fictions.

Like the smartphone stories that are the main focus of my study, these stories refashioned the roles of author, text, and reader in fascinating ways. Their writers bore little resemblance to the authors published by established Japanese publishers and had rather more in common with their readers. Mostly women in their teens and twenties who had never written before – the modest cellphone seemingly unlocking the creativity of an entire demographic – they often wrote their novels in just the same context as their readers consumed them, typing them out on their phones’ tiny keypads on their journeys to and from school and/or work.

Their readers, also mostly women in their teens and twenties, few of whom read traditional print fiction, had correspondingly little in common with conventional Japanese readers. Most intriguingly, they enjoyed relationships with the stories’ authors that go considerably beyond what we see today on social media, even though most authors, like Yoshi, used pseudonyms to hide their true identities not only from readers but also from schoolfriends, colleagues, parents, and their fellow commuters. The websites that published these novels enabled readers and authors to send each other messages: consequently, readers offered authors their thoughts on the novels, pointing out errors and offering suggestions for future developments. (Most cellphone novels were written, as they were published, in instalments.) The writing process correspondingly became collaborative, as writers incorporated these ideas into their work. (Yoshi, for instance, has said that the idea of his heroine contracting HIV came from a reader who told him of her own experiences.)

With their colloquial language and shocking storylines, the stories themselves were also very different to traditional Japanese novels. Significantly, when these cellphone stories began to be published in print form, enjoying such phenomenal success that at one point four of the five bestselling novels in Japan had begun life on a cellphone, it was by newer, less conventional publishers who retained the left-to-right, top-to-bottom formatting the stories had had on-screen, rather than the top-to-bottom right-to-left reading order of traditional Japanese script; unlike the conventional publishers who had approached Yoshi soon after Deep Love became a mobile success, they did not attempt to censor their content, either.

Though the cellphone novel was in many respects a peculiarly Japanese form, drawing upon the specific cultural and technological conditions in Japan at the start of this millennium, its influence can still be seen today. Its most obvious heir is Wattpad, the storytelling site whose 65 million users now spend 23 billion minutes every month reading its 400 million stories. Originally envisaged as a way to read on mobile phones, Wattpad retains the collaborative, community, and episodic aspects of cellphone novels; newer apps like Hooked, Tap, and Yarn, meanwhile, have updated the colloquial tone and mobile-specificity of keitai shousetsu by telling stories through text and multimedia messaging; the reader taps the screen to read the next part of the story.

Compared to the interactive, multimedia, location-aware fictions of today – stories like Eighty Days and The Cartographer’s Confession – the Japanese cellphone novels of the 2000s may seem limited. In their use of the admittedly limited mobile technology available to them, however, to tell new kinds of stories and rework the roles of author, text, and reader, they set the scene for today’s mobile fictions, and for my own research.

Anyone interested in mobile fictions might be interested in attending the British Library Interactive Fiction Summer School, which begins on Monday 23 July and runs for five days; booking details are available here.