From the strange to the enchanting: the hidden surprises of poetry pamphlets

by Gemma Meek, PhD student at Manchester Metropolitan University working in collaboration with the British Library, funded by the AHRC NWCDTP.  If you want to discover more about poetry pamphlets, you can search the library’s extensive collections. Or, you can support independent press through purchasing pamphlets on individual publisher’s websites. They are often very modest in price – ranging from £4-10. For a list of independent presses that publish poetry pamphlets visit: The National Poetry Library or Sphinx Review for a list maintained by Helena Nelson at HappenStance Press. 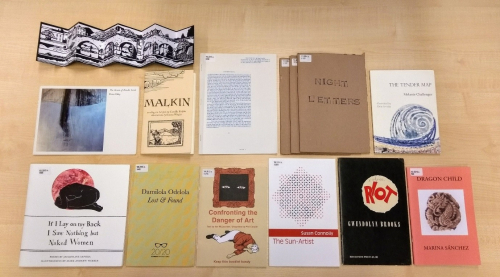 Exploring a doll’s house, beheading a saint and the collapse of an urban café. These are just some of the themes of the pamphlets shortlisted for the Michael Marks Award.

As the 10th Michael Marks Award approaches, it might be a good time to reflect on the current poetry pamphlet scene. As a PhD placement student at the British Library, this involves rummaging through the Michael Marks shortlisted pamphlets. As well as speaking to the various individuals within and around pamphlet publishing – from academics, to poets, publishers and librarians. This post is a reflection on these explorations, and a brief tour of some of the surprises in the pamphlet field.

Reading the Michael Marks shortlisted pamphlets evokes a range of different experiences. Sometimes it can feel like entering another’s dream, walking across a landscape or noticing overlooked aspects of the everyday. Although it is hard to choose a favourite, there are some pamphlets I am particularly drawn to: Sarah Jackson’s Milk (2008, Pighog Press), which includes a strange and uncomfortable exploration of a doll’s house. Richard Scott’s Wound (2016, The Rialto), which contains some violent (and occasionally erotic) poetry – with one written from a witness perspective of a saint’s beheading. And David Hart’s rather long titled: The Titanic Café closes its doors and hits the rocks or: Knife, fork and bulldozer ultra modern retail outlet complex development scenario with flowers. (2009, Nine Arches Press) as a politicised ‘documentary’ style pamphlet, using photography and poetry to explore a Birmingham café closure.

Traditionally, a poetry pamphlet is a small collection of poems printed and bound with staples (saddle-stitch), glue or thread in a slim publication (normally A5, but not always). Although pamphlets can vary in the number of pages, it is generally much thinner than a book – with the Michael Marks Award only accepting pamphlets up to 36 pages long. This bite-sized format emphasises a cohesive collection of poems, with their selection, arrangement and editing often developed through discussions between publisher and poet (unless, of course, they are self-published).

Many pamphlets are published by independent press, a term used to define small enterprises which produce a limited amount of publications annually, and are often considered an ‘alternative space’ to the mainstream or more established institutions (although there are always exceptions to the rule).

In the case of poetry pamphlets, the publishers are normally involved in the selection of work, its editing, design and marketing. Most presses have some form of selection criteria, whether that is based around the personal preferences of the publisher, or certain thematic/stylistic concerns. These can range from publishing a particular genre of poetry, to a focus on certain identities, dialects or works from particular regional areas.

Some presses have ‘house styles’, in which their pamphlets have uniform cover designs, size, font choices and branding – seen in some of the Smith/Doorstop or Tall Lighthouse Press pamphlets. Whereas others, such as Longbarrow Press or Pighog Press, produce more individualised, or unique pamphlets in accordance with the content and style of the work being published.

Presses also like to push the boundaries of what is possible with the pamphlet form. This is visible in David Hart’s The Titanic Café Closes Its Doors and Hits The Rocks (2009, Nine Arches Press), and in Devorgilla Bridge by poet Hugh McMillan and artist Hugh Bryden (2009, Roncadora Press) – an artist book turned pamphlet. Like This Press have been making ‘books-in-a-box’, with Rupert Loydell’s Tower of Babel (2013) containing a poetry pamphlet, an essay and various postcards of vibrant abstract paintings. There are also free, digital pamphlets which can be downloaded from Platypus Press and Neon Books, challenging a focus on tactility. And it is worth checking out the poetry pamphlets in University of Sheffield Special Collections by CURVD H&z, where spontaneous poetry is stamped on food labels and used envelopes. These various experiments might encourage poetry pamphlets to be seen as a ‘zone of activity’ rather than a fixed definition.[1]

There are also presses working to be more inclusive of the various voices, identities and performances occurring in the poetry scene – although much more work needs to be done in this area. As a recent report by David Coates from Ledbury Emerging Poetry Critics shows, not only is there is a lack of BAME writers being published, but there is also little critical review of the work. Chantelle Lewis also raised this concern when she ran an event at the library ‘Bringing Voices Together’, which aimed to highlight independent publishers committed to writers of colour. 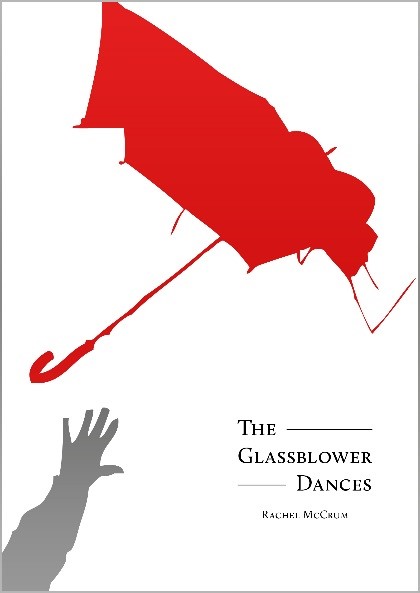 Some presses are also breaking tradition by exploring the relations and differences in written and spoken word. For example, Stewed Rhubarb Press shows a penchant for queer, feminist or minority voices– often publishing work that starts off as spoken word. Their pamphlets attempt to convey the poet’s performance through dialectical and formal experiments, to encourage the reader to perform the work.

Test Centre have also been working with spoken word and performance, publishing vinyl and cassettes with pamphlets, scores and books to highlight fiction, poetry and sound works. These multi-sensory publications are slamming, singing, humming and pacing words, whilst still giving the pamphlet form some exposure. As I come to the end of my placement, I hope to pull together these reflections on pamphlet experimentation alongside discussions with publishers on running an independent press. These reflections will be collated into a report, which will consider some of the following themes: definitions, working models, budgets, pamphlet quality and the place/benefit of pamphlet awards.

This report will be a collection of different voices – as I draw together the conversations and information individuals have shared. Although it is difficult to provide a cohesive account of the poetry pamphlet ‘scene’ in three months – I hope this report will generate further discussions about the future of pamphlet production.

[1] The idea of a ‘zone of activity’ was used by Johanna Drucker to explain the different experiments and forms within artists’ books. Drucker, Johanna. (2004) The Century of Artists’ Books. New York: Granary Books