Mary Shelley in Italy: ‘…tragedy with a scene both affecting and sublime’

By Stephen Noble, Modern Archives and Manuscripts. You can read more about Mary Shelley on our Discovering Literature website. Material relating to Mary Shelley’s Frankenstein is now on display in our Treasures Gallery.

In 1818 Mary Shelley and her husband Percy Bysshe Shelley travelled to Italy on the advice of Percy’s doctors, but also to avoid their creditors. Over the next few years they travelled all over the country and it was a time of great creative output for them both. Mary completed the novels Matilda and Valperga, as well as the plays Proserpine and Midas, while Percy wrote his lyrical drama Prometheus Unbound.

These years were also marred by tragedy. In September 1818 their daughter Clara contracted dysentery and died in Venice, where they had gone to find medical attention. Nine months later whilst staying in Rome, their son William died after catching malaria. 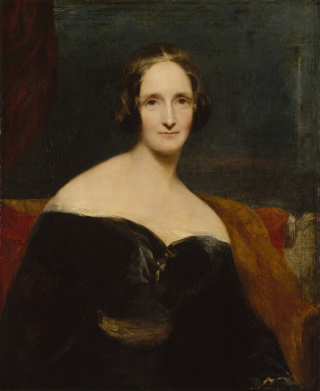 Despite the traumas the couple endured, they continued to travel and were able to enjoy their experiences in Italy. In January 1821 Mary Shelley wrote to her stepsister Claire Clairmont (Ashley MS 4020), giving her ‘some account of my adventures’. She had been to Lucca to see a performance of Tommaso Sgricci, a famous improvisational poet. She wrote ‘Sgricci acquitted himself to admiration in the conduct and passion & poetry of his piece. As he went on he altered the argument as it had been delivered to him and wound up the tragedy with a scene both affecting and sublime’. 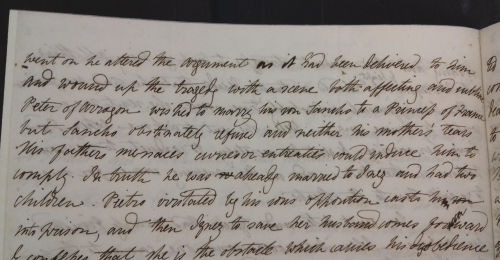 Mary was moved by the performance, and by how ‘truly and passionately did his words depict the scene’. Others in the party were not so impressed, describing it as ‘una cosa mediocra’, a mediocre thing, but to Mary ‘it appeared a miracle’.

In July 1822 tragedy struck again. When returning from a trip to Livorno, where he had visited their friends Leigh Hunt and Lord Byron, Percy Bysshe Shelley drowned when his boat sank during a heavy storm in the Gulf of La Spezia. A few weeks later Mary Shelley wrote to her friend Maria Gisborne describing the last months she and Percy had spent together, the events of his death and her immense grief (Ashley MS 5022). ‘I said in a letter to Peacock, my dear Mrs. Gisborne, that I would send you some account of the last miserable months of my disastrous life’…‘The scene of my existence is closed’.

On Monday 8 July, ‘it was stormy all day, and we did not at all suppose that they could put to sea’. By Wednesday the weather had improved enough for boats to arrive, which ‘brought word that they sailed on Monday, but we did not believe them’. On Friday 12 July, a letter arrived for Percy from Leigh Hunt in which Hunt wrote ‘Pray write to tell us how you got home, for they say that you had bad weather after you sailed Monday, and we are anxious’.

Now she knew something had gone wrong, ‘The paper fell from my hands. I trembled all over’, but she still had hope that the worst had not happened. In Lerici, the nearest town, she was told there had been no reports of any accidents. In Livorno she learned that Percy had been warned about the storm, but set sail anyway.

It was while returning home on Saturday 13 July that Mary learned that part of his boat had been found, washed ashore a few miles away from Lerici. It was not until 19 July, almost two weeks after his death, that Percy Bysshe Shelley’s body was recovered. 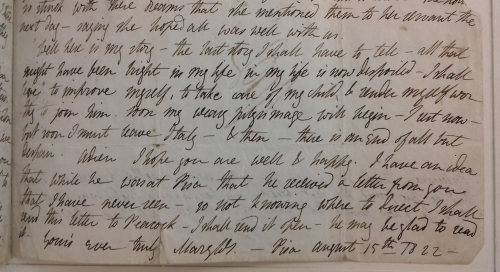 Mary closes the letter: ‘Well, here is my story – the last story I shall have to tell. All that might have been bright in my life is now despoiled’.

Mary Shelley did go on to tell other stories, writing and publishing many novels, short stories, travel books, biographies, articles, and poems. Published in 1930 with the title Absence, Mary Shelley wrote of her grief for her husband (Ashley MS A4023):

How dark and dreary seems the time!

‘Tis Thus, when the glad sun is flown, 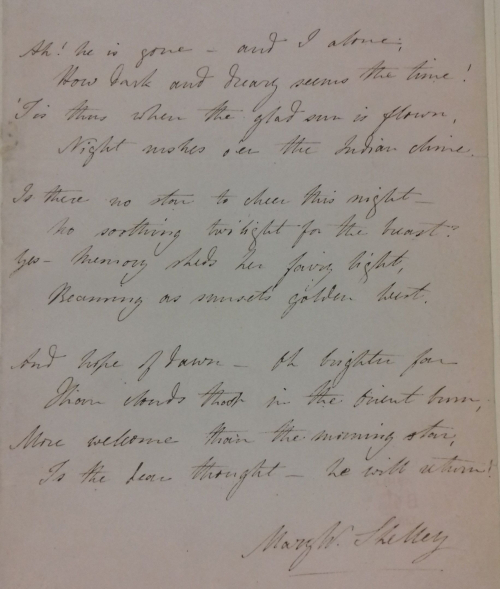 Posted by Eleanor Dickens at 8:00 AM