By Greg Buzwell, Curator of Contemporary Literary Archives, and Silvia Gallotti, Manuscripts Cataloguer. The Michael Palin Archive, generously donated to the British Library by Michael Palin in 2017, is now available for consultation in the Manuscripts Reading Room. A display – Michael Palin: Writer, Actor and Comedian – featuring items from the archive can be seen in the Sir John Ritblat Gallery: Treasures of the British Library until 11th November 2018.

Attempting to curate a small display featuring material from the archive of Michael Palin was rather like attempting to select a small number of iconic songs written by The Beatles. The sheer volume of fascinating material available to choose from rapidly made the task of deciding what to leave out the stuff of nightmares. Diaries, letters, photographs, notebooks, annotated scripts and publicity material all jostled for attention. About fifty of the notebooks date from Palin’s time with Monty Python’s Flying Circus and provide a fascinating insight into how comedy routines such as ‘Spam’ and ‘Spanish Inquisition’ developed through different versions into those we know – and can’t help but recite using all the different voices – today. Finding iconic material to exhibit was clearly not going to be a problem. 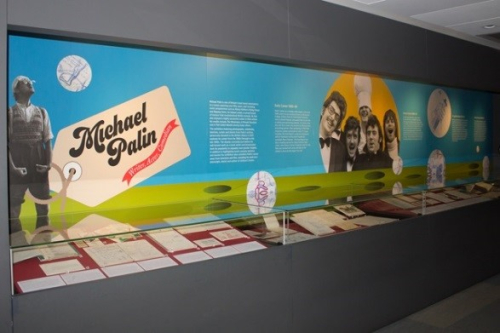 The Michael Palin display in Treasures Gallery at the British Library.

The display follows Palin’s career from the mid-1960s up to the late 1980s. The first case opens with the script for a mock theatrical documentary about attitudes towards sex through the ages called ‘The Love Show’ which Palin worked on with Terry Jones in 1965. Although never produced ‘The Love Show’, for which Palin received his first payment as a professional writer, shows early signs of the surreal humour that would come to define Monty Python. Other highlights in the first case include handwritten scripts by Palin and Jones for The Frost Report  –  a show which proved to be a meeting ground for future Pythons Palin, Jones, John Cleese, Graham Chapman and Eric Idle – and from Do Not Adjust Your Set where Palin, Jones and Idle met another future Python, Terry Gilliam. The item on display relating to Do Not Adjust Your Set is a sketch, written by Palin, called ‘Captain Fantastic’s Christmas’. David Jason played the hapless Captain Fantastic, a bumbling bowler-hatted superhero endlessly battling Mrs Black – ‘the most evil woman in the world’ – played by Denise Coffey. Although intended for children the anarchic humour of Do Not Adjust Your Set rapidly gained a cult following among adults. 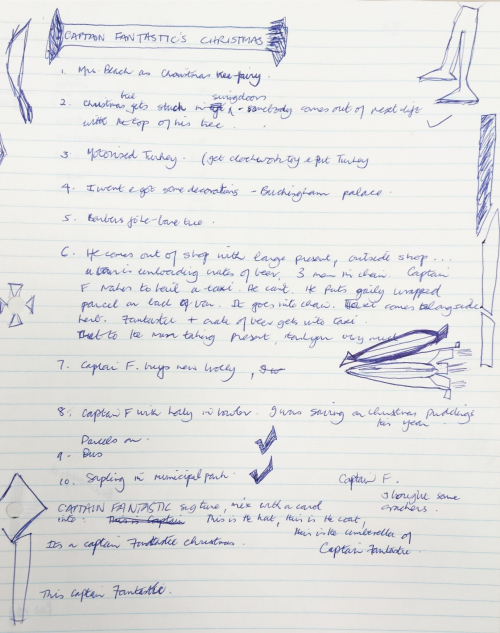 The following section is dedicated to Palin’s career with Monty Python’s Flying Circus, and to his subsequent work on Ripping Yarns, and on films such as The Missionary, A Private Function and A Fish Called Wanda. Included in the display is an early scene from The Holy Grail in which a surreal explanation for the absence of horses and the use of coconut shells to mimic the sound of their hooves is provided (‘Our horses grew weary, unable to carry us further. We were forced to leave them by the mountain and continue with coconuts …’). Also included is an early draft of the ‘Biggus Dickus’ scene from Life of Brian and one of Palin’s notebooks in which he has written a potential running order for various Python routines including ‘Spanish Inquisition’, ‘Fish Licence’, ‘Scott of the Sahara’ and ‘Semaphore Version of Wuthering Heights’. 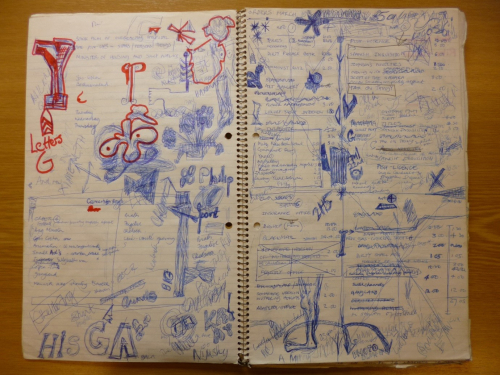 One of Michael Palin’s notebooks, listing potential running orders for sketches including ‘Spanish Inquisition’, ‘Scott of the Sahara’, ‘Communist Quiz’, ‘Semaphore Version of Wuthering Heights’ and many others. Add. MS 89284/2/15. © Michael Palin

Ripping Yarns, which Palin worked on with Terry Jones in the mid-1970s is represented by an annotated script from the pilot episode ‘Tomkinson’s Schooldays’. The episode is a brilliant satire on public school life and the adventure stories found in magazines such as The Boys Own Paper. Tomkinson’s trials at the school include being nailed to a wall on St Tadger’s Day, fighting the school grizzly bear, being hunted down by a leopard while attempting to escape and, as seen here, having to take part in the ‘Thirty Mile Hop’. 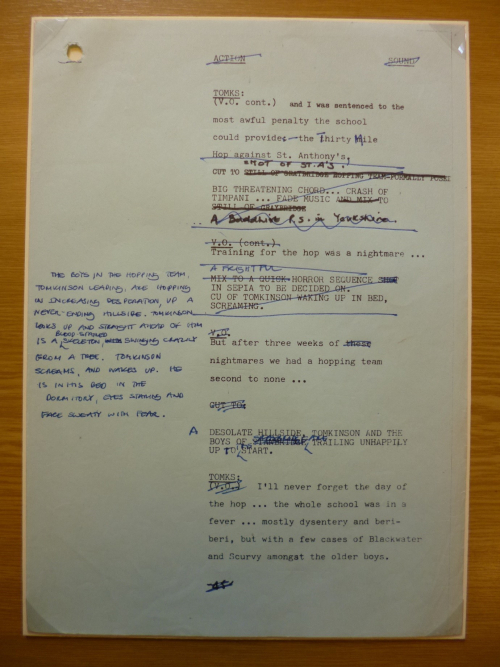 The last part of the display looks at some of the less widely known aspects of Palin’s career including his books for children, and the brilliantly disturbing Bert Fegg’s Nasty Book for Boys & Girls (a humorous book satirising popular encyclopaedias for children and presented as though written by the most unsuitable and disturbed person imaginable for the job). This part of the display also includes two of Palin’s diaries, one of which is open at an entry for 27 March 1970, in which Palin recollects the beginnings of his career just a few years earlier, when he was ‘finishing ‘The Love Show’ with Terry’, ‘still unmarried’, with ‘no immediate prospects’. He concludes: ‘A little bit of nostalgia, but I like sometimes to get my bearings right, just to convince myself that I haven’t wasted the 1960s’. 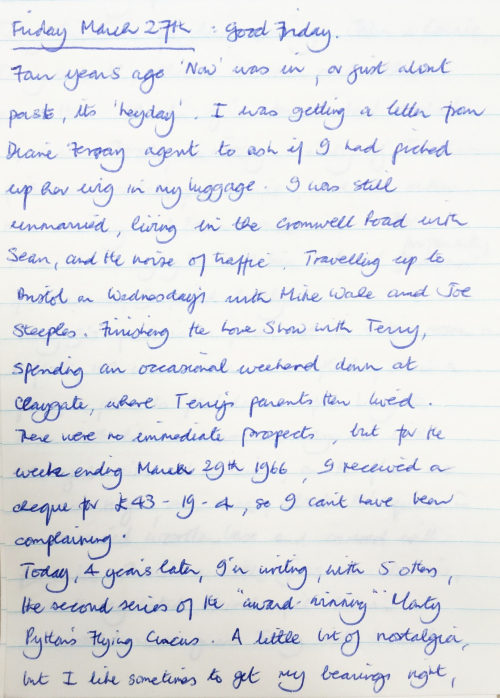 The display represents only a very small portion of the archive, but hopefully it provides a glimpse into the riches it contains. The large amount of material included in the collection relating to the production, publicity and distribution of Palin’s TV shows and films makes the archive a wonderful resource for those interested in the history of comedy, TV and filmmaking. The wealth of notebooks and annotated scripts meanwhile provides a unique insight into one of the nation’s most popular entertainers, and into the genesis and development of comedy sketches and films that are now part of the very fabric of our cultural history.