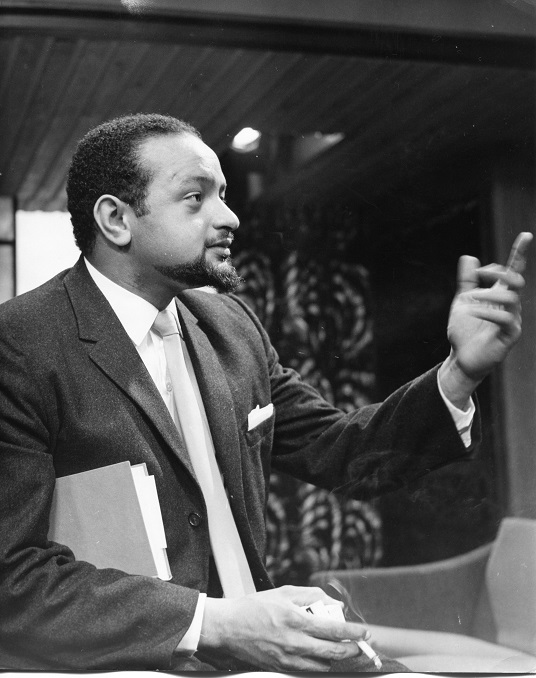 This is a poem about Jamaica, about the experience of the slave trade and of colonisation and about a struggle for freedom and for identity which still rages today among Caribbean peoples. It deals with political issues, but is not simply a political poem. Rather it conjures up the swirling colours, the music, the moods, the atmosphere of a bustling, suffering, vital island community.

So says the blurb for the first edition of Andrew Salkey’s epic poem published in 1973, a typescript of which is currently on display in Windrush: Songs In a Strange Land. The poem had been 20 years in the writing. Its seed lay, presumably, in the poem of the same name that won Salkey the Thomas Helmore Poetry Prize in 1955, though nothing remains of this earlier effort in his archive here at the British Library. There are, however, records of the poem’s publication and reception among the fifty cartons of papers (and sound recordings) that make up the Salkey Archive. These boxes have been extensively mined for the Windrush exhibition: the number of items on display from this one archive is testament to Salkey’s importance as a central figure in the Caribbean arts scene and his tendency to act as its unofficial archivist.  He was jokingly labelled ‘Chief Recorder of Caribbean authors and their whereabouts’ by close friend Sam Selvon in recognition of his meticulous collecting and documentation activities. But more than that, Salkey played a crucial role in connecting and encouraging writers, influencing the decisions of British publishers and asserting the worth of Caribbean arts and cultures internationally. 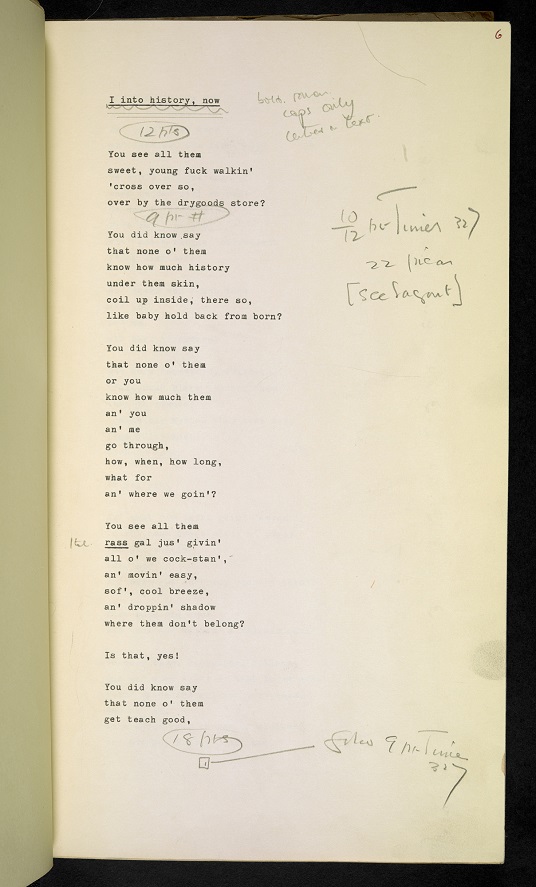 As a novelist, poet, broadcaster with the seminal BBC programme Caribbean Voices, activist, academic and co-founder of the Caribbean Artists Movement, Salkey’s importance is difficult to overstate. Born in Panama in 1928, brought up in Jamaica, resident in Britain from 1952 and later the US, Salkey was a truly diasporic figure. His political interests in revolutionary Cuba, newly-independent Guyana and Chile’s fight against the Pinochet regime are all evident in the archive, as is his stellar network of correspondents which include CLR James, Chinua Achebe and even a fan-letter from Maya Angelou. His own writing is well represented too, with manuscripts and correspondence pertaining to many (though not all) of his novels, poetry, children’s stories and non-fiction books. 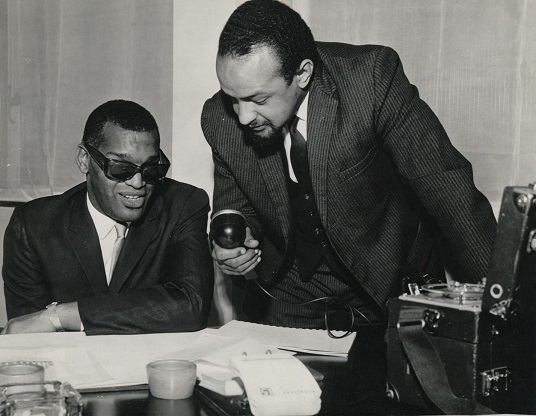 When it came to deciding which example of Salkey’s own work to include in the Windrush exhibition, the decision was not easy and I wish we could have included more items. Whereas his novels exploring the Caribbean immigrant experience in Britain had previously been displayed in exhibitions at the Library, we felt that this time the poem Jamaica deserved a showing. For myself and my co-curator Elizabeth Cooper, Jamaica stands out for the power and directness of its language, and also because it was representative of many Caribbean writers and artists’ desire to possess their own understanding of Caribbean history and culture. Salkey explained this desire for greater knowledge to Anne Walmsley (quoted in her book The Caribbean Artists Movement):

I got a British Museum reading card, and I went to the Public Record Office nearby. And I really started learning about me and home and the history, because I damn’ well wanted to talk to Jamaicans about Jamaica in the long poem that I was hoping to write. And therefore for the first time I began to realise myself as a colonial and us as a colony, and our history, and the way that we were forever at somebody else’s beck and call. Our economy wasn’t ours. Even our language wasn’t really ours. We had to, at least I had to, relearn a great deal.

Present in the archive is the original (anonymous) reader’s report that was submitted to Salkey’s publishers, Hutchinson. The reader judged the poem to be ‘a work of imagination and originality’ - ‘always interesting, and often moving – nowhere more so than in the descriptions of what "freedom" means, when it consists only in abolishing licensed slavery.’ They noted some reservations about the symphonic structure (which Salkey removed prior to publication), but praised Salkey’s use of dialect:

The many dialect sections seem outstandingly successful to me: they capture a very rich human feeling and present no difficulty to someone unfamiliar with Caribbean speech, like myself. Within their terse and repetitive rhythms, there is a great deal of unforced poetry. This is the real language of ritual and as such it has a greater lyricism and power than the well-contrived but slightly stale formality of the other sections.

On publication Jamaica received a mixed response, both from critics and friends. The TLS (25 Jan 1974) described the poem as ‘a loud cry for the island to reclaim its identity from the wrongs and sorrows of imperialism, ancient and present, and reassert Caribbea in myth, history and current blood’, but did not find its execution entirely successful.  One friend, Judy Ruggles, wrote to say she had initially regarded it as ‘Andrew’s indulgence’ but had since changed her mind on visiting Jamaica for the first time. The Jamaican Daily News lauded the poem for telling the island’s pre-Columbian history, whereas the sharpest criticism came from the UK version of the Jamaican Weekly Gleaner (21 August 1974) which opened its review by quoting Samuel Johnson’s line: ‘Sir (it) is like a dog’s wailing on its hind legs. It is not done well but you are surprised to find it done at all’. Despite first impressions, the reviewer is not, actually, questioning the quality of the writing so much as the reason for publishing a 100-page poem that it says hardly anyone will read since Salkey ‘antagonises’ his middle-class readers with the inclusion of ‘four-letter words’, and ‘The masses who may approve of that sort of thing do not buy books, neither prose nor poetry’. But I will give the last word to Christopher Laird, publisher of the Trinidadian arts journal Kairi, who declared ‘Again I must tell you how successful your “Into History Now” has been and how much we all dig it. Hardly a statement can be made these days without fitting in a line from “Into History”’.

That influence has lived on, as demonstrated by Raymond Antrobus who read from the poem at Monday’s event on the sound of the Caribbean voice. He spoke about his appreciation of Salkey’s poetry and the importance of seeing a copy of Jamaica on each of his parent’s bookshelves – his English mother and Jamaican father - as he was growing up.

Part of the power of Jamaica lies in its refrain ‘I into history, now’ with its radical sense of embodying history in order to reclaim it. Salkey returns to this idea in the final movement of the poem. Starting with an invocation to ‘grab weself like we know weself’, it concludes with these lines:

Culture come when you buck up
on you’self.
It start when you’ body make shadow
on the lan’,
an’ you know say
that you standin’ up into mirror
underneat’ you.

I say to meself,
“Is how the mento music go?”

The twenty years’ journey of self-discovery that Salkey embarked upon with this poem was a long one, but a necessary one given the gaps and silences that have dogged our understanding of Caribbean history, culture and identity. Elsewhere in the exhibition we feature the work of other cultural figures who embarked on a similar learning process, from poet James Berry who wrote about coming to terms with his Caribbean background only after witnessing racism in the southern states of the US, to novelist Andrea Levy who has written about her own revelation that she was part of the ‘black experience’ despite growing up in a light-skinned, middle-class family who had distanced themselves from the black community due to the legacy of colonial-era shadism. This flourishing of Caribbean literature is in evidence throughout the exhibition, so if you haven’t seen it yet there is still time as the display runs until 21 October.

As for Andrew Salkey’s archive - without which the exhibition would be considerably poorer - we are pleased to announce that cataloguing of the collection will begin early next year and will lead to a conference to be held here at the British Library in 2020, thanks to the support of the Eccles Centre for American Studies.