Making Magic: conjuring and ventriloquism in In the Spotlight’s regional theatre volumes

by Beatrice Ashton-Lelliott, a PhD researcher at the University of Portsmouth studying the presentation of nineteenth-century magicians in biographies, literature, and the popular press. She recently spent three months as a research placement student on the British Library’s In the Spotlight project, cleaning and contextualising the crowdsourced playbills data. She can be found on Twitter at @beeashlell and you can help out with In the Spotlight at playbills.libcrowds.com

In working towards creating a (largely!) unified dataset of playwrights for each ‘play’ mentioned on In the Spotlight, it quickly became apparent that we were dealing with much more than what we might typically associate with performance in theatres, eg. dramas. This isn’t necessarily problematic, and actually is part of what drew me to the project in the first place as someone who works on a slightly more unusual form of performance: magic.

Although magic is by no means as common as a standard Shakespeare or the thousandth version of She Stoops to Conquer (which features in our most popular titles list, and is prominent in itself for sharing a playbill with magic acts (1)) we do have magicians and ventriloquists crop up now and again. Performers such as John Henry Anderson would often blur the lines between stage magic and more ‘typical’ performances through the use of pantomime as a vehicle to display his best tricks and apparatus. These types of unusual performances are now much easier to flag up thanks to the new tagging feature, but for now I’d like to delve into some of the playbills which our participants have identified so far and to provide some context into the people and performances behind the playbills.

The first belongs Joseph Jacobs (1813-1870), a relatively unknown figure from the nineteenth-century magic circuit in comparison to his contemporaries, such as the aforementioned Anderson. Edwin Dawes describes in book The Great Illusionists (1979, New Jersey) that Jacobs acted as a kind of running mate against Anderson (professional rivalries were common in the magic profession), and that he died in his fifties having begun his career performing in provincial towns or regional theatres (2), such as those which act as the focus of In the Spotlight. It is perhaps unsurprising, then, that Jacobs would appear in the volumes. He features in a February playbill from the Plymouth volumes, and The Western Courier, West of England Conservative, Plymouth and Devonport Advertiser promotes his performance of Wednesday 19 October 1842, stating that the ‘great original Wizard and Ventriloquist’ has ‘fully established’ his fame, so he clearly made several visits to this city. (3) 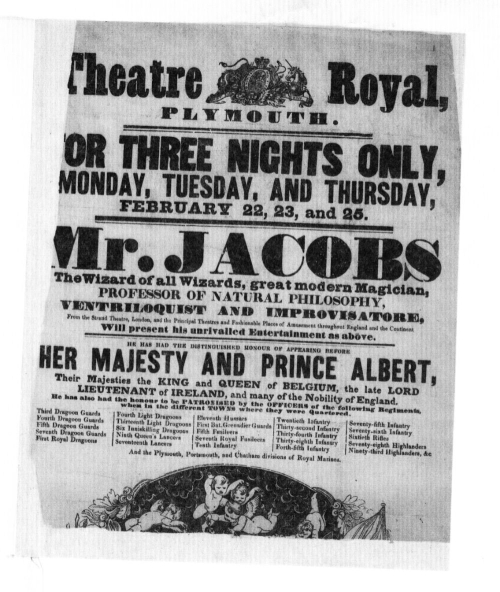 Newspaper advertisement for Mr. Jacobs's show at the Theatre Royal in Plymouth

A notable figure to appear in the Portsmouth volumes is Signor Rosigniole, who can apparently summon birds in ‘a most astonishing Proof of his Art’ at the New Theatre in Portsmouth in May of 1782. Although Rosigniole takes up a third of the playbill, he is advertised only as an ‘end of play’ act, and the small print at the bottom of the playbill reveals that ‘TICKETS to be had of Signior Rosigniole, at Mr. Carr’s’, indicating that he has had to double up in an administrative role! 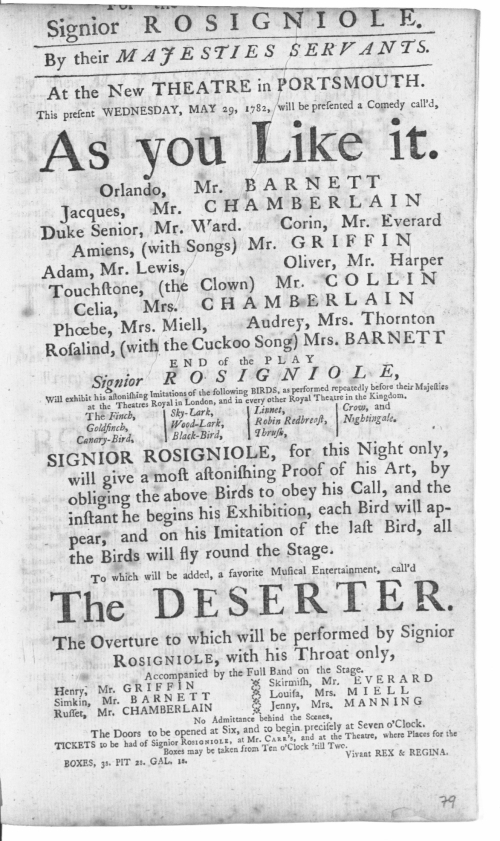 A Biographical Dictionary of Actors, etc. (1991) has been a great help in tracking Rosigniole’s career, which seems to have been cut short in 1800. Rosigniole certainly had a varied career, starting off touring with Philip Breslaw (4), a notable magician who penned the popular conjuring manual Breslaw’s Last Legacy (1784), then moving to selling tickets in Portsmouth…

In the year of Circus250, I have to include a circus poster. This Cooke’s Circus playbill from Edinburgh in the mid-nineteenth century features the unfortunately common phenomenon of a white performer adopting the ‘character’ of an Indian magician. This frequent occurrence has been critically examined by Chris Goto-Jones in his book Conjuring Asia (2016), but it’s most notable that James Cooke, the performer who features on the bill, seems primarily to be performing equestrian acts, so one wonders why he felt the need to adopt a ‘magician character’ at all!

Circus poster showing the ways in which tropes were perpetuated in ways which often made little sense.

Ventriloquism and magic often shared the stage together, and this bill from Oswestry 1821 features one of the most prominent ventriloquists of the period: Alexandre Vattemare. Most importantly, and perhaps unexpectedly, for the British Library, Mr. Alexandre also played a key role in developing a system of item exchange between libraries and museums in a desire to promote cultural discussion (5). 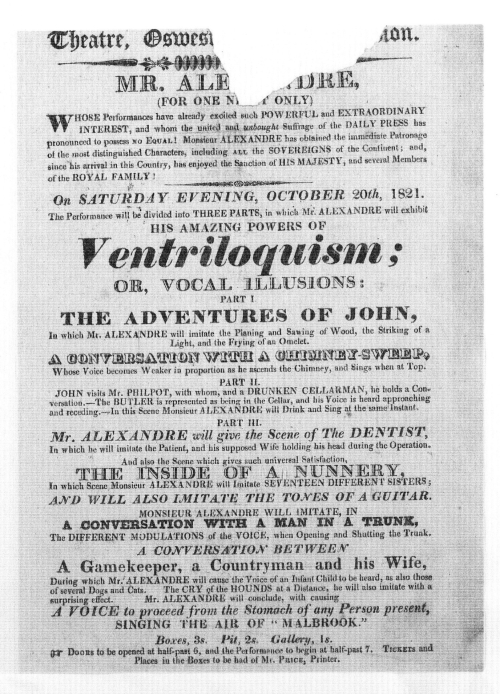 Playbill showing the ways in which Mr. Alexandre’s performances were carefully planned, and are laid out in the same scene-by-scene style as we might expect from a more standard dramatic performance.

As is clear from the playbill, Mr. Alexandre’s performances were carefully planned, and are laid out in the same scene-by-scene style as we might expect from a more standard dramatic performance. 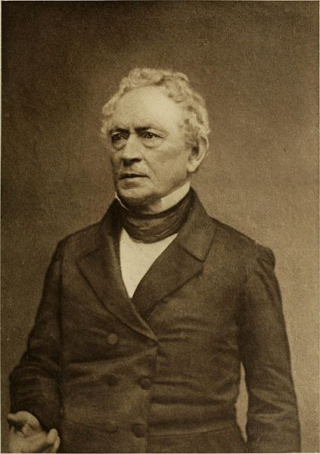 Photo of Alexandre Vattemare in The Public Library of the city of Boston : a history by Horace G. Wadlin, 1910, 1911

In light of these magical performances cropping up amongst In the Spotlight’s playbills, it is important to remember that magic and the theatre did not always share a harmonious existence. In the Theatrical Times of the 13th June 1846, the performer M. Phillipe is criticised for performing in theatres; the writer notes that ‘crowds are attracted to it’ but that ‘it is a great pity that he cannot find any other arena than that of a theatre in which to manifest his handi-work’, imploring that he move ‘a little farther westward than the Strand’ (6). In the Spotlight highlights some brilliant examples of the fact that, despite some opposition, magic still managed to infiltrate regional theatres.

Posted by Eleanor Dickens at 11:54 AM