by Callum McKean, Curator of Contemporary Literary Archives and Manuscripts, who assisted on the sound selections for the exhibition Windrush: Songs in a Strange Land, on display in the Entrance Hall of the Library until 21st October 2018. More details about the exhibition can be found here.

By some coincidence, Britain’s first boom in mass migration roughly coincided with the growing availability and fidelity of sound recording and playback technology. Because of this, Windrush: Songs in a Strange Land, the Library’s free exhibition which is now entering its final month in the Entrance Hall Gallery, is a story which must be told – that is, spoken, shouted, sung, recited and chanted – as well as shown, seen and read. Sound recordings in the exhibition range from a speech by Marcus Garvey, whose precision and force as a profoundly gifted orator has not diminished over time, to readings by poets like Linton Kwesi Johnson, Benjamin Zephaniah and James Berry, whose incisive socio-political commentary, linguistic and formal experimentation, and willingness to engage with emerging musical forms have built upon the deep oral tradition of the Caribbean and impacted British poetry immeasurably in the process. But beyond these famous and perhaps familiar voices, the exhibition also highlights a number of everyday speakers, drawn from the Library’s Sound Archive. These stories of arrival and work, education and family-building, integration, tension and everything in between and beyond, help to build a fuller picture and go a long way to helping us think about the exhibition’s key questions: Why did people come? What did they leave behind? And how did they shape Britain? 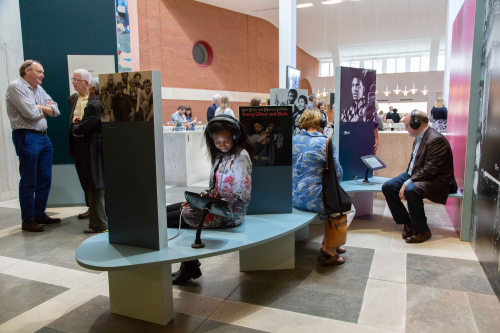 Visitors use the exhibition sound terminals on opening night.

These stories are told through the Library’s vast and varied oral history collections, which come in a variety of forms. The first, and most accessible form, is the pre-curated radio programmes which, through their edited structure and high production values, provide an invaluable introduction to the canonical issues surrounding the Windrush moment and its afterlife. Shows such as Changing Caribbean (1960), London’s Black Pilgrims (1965) and Passage to the Promised Land (1996) form the backbone of the exhibition’s sound offering, with roughly contemporaneous interviews and more recent reflections charting the shifting and complex attitudes of those who came and their decedents.

The second kind of oral history takes the form of a long question and answer session with an individual or a group of individuals, usually lasting a few hours, which is recorded and left completely unedited for posterity. In these recordings, interviewees often mumble, stumble, clip and talk around the questions they are asked; they evade and waffle, mirroring the rhythm of a real conversation. The first reaction, for a curator tasked with locating narratives in these unwieldy audio-files, is often frustration. Yet there’s a strange sort of intimacy too, which over time becomes not only disarming but – I think – actively imbeds you in the lived experience of the person to whom you’re listening. These collections are often focused around occupational groups – there’s one for nurses, for instance, as a group which was highly represented among those arriving from the Caribbean.  But many are also incidentally concerned with the diasporic experience, such as the Millennium Memory Bank project which aimed to record oral histories with a demographically representative section of the British population as a kind of time capsule at the turn of this century. This project interviewed people from the Caribbean living in Britain not as immigrants but as part of British society at a particular point in time. Interviews like that with Eunice McGee, a Caribbean-born homemaker from the Midlands, allow researchers to engage with social history in a more direct and intimate way, as the discussion tracks the minutiae of everyday life – of bringing up families and buying a house, of marriage and work, of cooking and speaking – and the interested listener can move beyond external narritavisation of racial and economic groups and allow the complexity of the everyday to show itself through the life of a particular individual.

All of these encounters made at the sound terminal in the exhibition, or with headphones in the Reading Rooms, are valuable. They allow us to commune with the past; to hear stories which affirm and contradict what we already think we know, often in the same recording. But this is part of the point. The idea of Windrush generation has become monolithic; a mythology which, for better or for worse, represents an over-simplification. The Library’s job is to facilitate access and act as custodians for material which complicates this narrative and others like it. Oral history helps to make sure that the multifaceted past is preserved in order that we, in the present, can avoid misrepresenting those who lived through it. (Even if this means listening intently to someone’s unedited recollection of their day).

Posted by Eleanor Dickens at 11:39 AM