by Imogen Durant, PhD Placement Student working on the Library’s Contemporary British collections of poetry pamphlets and artists’ books. The Library will be holding a poetry reading on the 10th December in celebration of the 10 year anniversary of the awards.  Poets include Christine de Luca, Omikemi Natacha Bryan, Charlotte Gann, Richard Scott and Phoebe Stuckes. You can read more about the event here.

The judging panel for the 2018 Michael Marks Awards have shortlisted five pamphlets and four publishers for the 10th anniversary of the awards. The judges were: 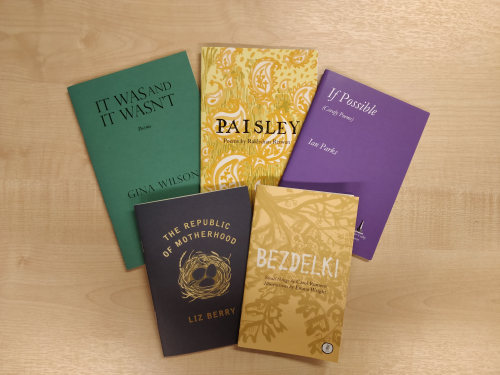 Pamphlets shortlisted for the 2018 Michael Marks Awards for Poetry Pamphlets

The judges commented on the diversity of the submissions they received, and shortlisted the following pamphlets:

The judges highlighted the calibre of this year’s shortlist, praising Wilson’s “dry wit”, Rizwan’s “tonal sharpness” and Parks’ “musicality”. They felt that Berry’s poems had an “electric charge”, and commended Rumens’ “savage and wild but beautifully cadenced” work.

Four publishers were also shortlisted for this year’s publishing award:

Luke Thompson’s Guillemot Press is an example of a publisher which plays with the possibilities of the pamphlet form, while Duncan Lockerbie’s Tapsalteerie Press shows a commitment to eclecticism, highlighting the crucial space the pamphlet offers to new and emerging writers.

The winners of the poetry, publisher and illustration prizes will be announced at the awards ceremony at the British Library on 11th December. The winning poet and publisher will each receive £5000, and the winning illustrator will receive £1000.

The winning poet will also be invited on a residency at the Harvard Centre for Hellenic Studies in Greece in the spring of 2019.

The Contemporary British Publications team at the British Library have created a new pamphlet to celebrate the 10 year anniversary of the Michael Marks Awards.This pamphlet features poems from each of the previous winners of the award, many of which were written during the poet’s residency in Greece. The winners of the illustration award have produced artwork in response to three of the poems in this pamphlet.The Michael Marks Charitable Trust and The Eccles Centre for American Studies have generously supported the production of this pamphlet.

Please join us in what promises to be an exciting evening of poetry and reflections on the success of the first 10 years of the Michael Marks Awards.