‘Some little language of their own’: English and Scottish dialects, and the desire for a private language

Earlier this year, I found myself vigorously agreeing with a Guardian Long Read article which effectively argued that the English language was not so much a liberating lingua franca as a highly successful virus, an invasive species; the linguistic equivalent of a grey squirrel or cane toad. Around the same time, I was reading Olga Tocarczuk’s Booker-winning Flights, and reacted even more strongly to this passage:

“There are countries out there where people speak English…It’s hard to imagine, but English is their real language. Oftentimes, their only language…How lost they must feel in the world, where all instructions…all the menus, all the excruciating pamphlets and brochures ­– even the buttons in the lift! – are in their private language. They may be understood by anyone at any moment, whenever they open their mouths. They must have to write things down in special codes. Wherever they are, people have unlimited access to them…I heard there are plans in the works to get them some little language of their own…so that for once they can have something just for themselves.”

This is something I’d been feeling for a while, but I’d never seen it expressed so clearly before.  It encompassed so many of my frustrations: the experience (probably shared by many first language English speakers who speak another language) of being spoken back to in English when abroad, even when you’ve clearly demonstrated your competency or fluency; having to convince writers whose work you’re translating that, however good their English is, your choice of words *is* the best one; even my occasional sense of doubt that literary translation into English is something I should be doing. After all, does the world really need more English?

And yet, I’ve spent the vast majority of life in the UK, speaking English. I love the way the language looks and sounds, its idiosyncrasies, the way it sounds in Cardiff, Derbyshire, Birmingham, not to mention the wider Anglophone world. Given its status as an international language, as Tocarczuk suggests, it is easy to forget that English is just another West Germanic language, and the (only) private language of hundreds of millions of people. As translator-in-residence here at the BL, I’m interested in exploring not only linguistic diversity in general, but diversity within languages, especially as spoken in different areas of modern Britain. Additionally, my selfish desire to have a truly private language has got me wondering about forms of English that cannot be easily understood by non-natives, or even other English speakers.

So I was delighted to read first line in Liz Berry’s poem ‘Birmingham Roller’, written in Black Country dialect - ‘Wench, yorwm the colour of ower town’ – or a line in another of her poems simply listing words: ‘bibble, fettle, tay, wum’. I had a similar feeling looking at the first line of Hugh McDiarmid’s Braid Scots epic A drunk man looks at the thistle: ‘I amna fou' sae muckle as tired - deid dune.’ 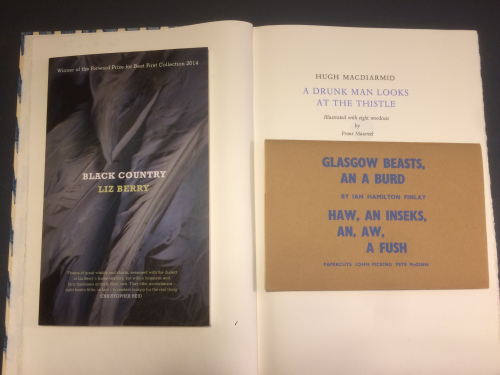 Before I start getting complaints, I’m aware that Scots is not so much a version of English as a sister West Germanic language, which evolved alongside, rather than from, its southern neighbour. All the same, it comes as a relief to know that there are utterances that look and sound like English, but which the Polish narrator of Flights—with their privileged access into the private lives of hundreds of millions of Anglophones—would struggle to comprehend. In fact, many native speakers may struggle to comprehend them; think of initial reactions to Trainspotting or the Gallagher brothers having to be subtitled on US TV. The BL’s Head of Contemporary British Collections and Scottish Poet, Richard Price, recommended another great example of this kind of writing to me. Ian Hamilton Finlay’s Glasgow Beasts an a Burd, as well as being a beautiful artefact, with papercut images by John Picking and Pete McGinn (due to its small print run I also had to make my first trip into the Rare Books Reading Room to see it), is a gloriously irreverent journey written in a tongue that is certainly not the international language of airports and lift instructions. It documents the poet’s transmogrification into various animal forms, all the while retaining a strong grasp of Glaswegian:

I love not only the sounds, but also the spellings he uses, like ‘Didjye’, which could be Somali word, or ‘hail simmer’, which could be so many things (in this instance, it’s ‘whole summer’).

English has become dominant partly due to its incredible ability to evolve over time, and absorb the syntax and vocabulary of the languages it supplants, from Welsh to Urdu. Maybe those of us who wish to regain some sense of ‘privacy’ in our speech will have to harness this power and create new Englishes, at least until some other language replaces it on the international stage, and we can go back to merely being speakers of an obscure West Germanic tongue.