Graham Greene and the curse of the sausage roll: an image of class and disgust in Brighton Rock

by Barry Taylor, Curator of Romance Studies. You can read more about the Library's holdings related to Brighton Rock here. 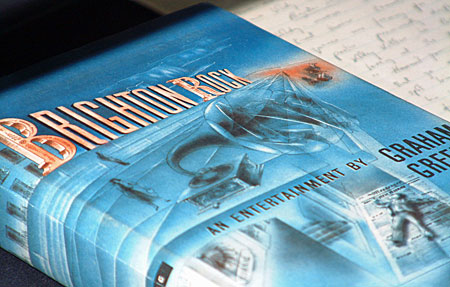 Students of Brighton Rock in the BL can read, in addition to the original novel, the French, Polish and Finnish translations, and consult the draft script of Terence Rattigan’s screenplay.

The novel tells the seamy tale of Pinkie Brown, murderous teenage micro-gangster, his marriage to the innocent waitress Rose in order to prevent her testifying against him, and his pursuit by good-time girl Ida.

You might expect the chief alimentary image in Brighton Rock to be Brighton rock itself:

But a more persistent food image which escaped me when I first read the novel, but which haunted me on a recent second reading is that of the sausage roll. The criminals live in a guest house (Frank’s), where Pinkie’s bedsit, which he inherited from his predecessor, is the common room.

‘That’s right, Pinkie,  He’s [Colleoni] running the business in a big way.’  A big way – it was like an accusation, a reminder     of the brass bedstead at Frank’s, the crumbs on the mattress.  (58)

Don Colleoni is a big-time gangster who stays at the swell Cosmopolitan Hotel.  Brass bedsteads also have a traumatic     sexual charge for Pinkie as they remind him of sharing a room with his parents.

The Boy lay on the bed. A cup of coffee went cold on the washstand, and the bed was sprinkled with flakes of pastry.  (61)

His sleep was functional.  When Dallow opened the door he woke at once.  ‘Well?’ he said, lying there without moving, fully     dressed among the pastry crumbs.  (62)

Ida to Rose: ‘I suppose you talked to him [Spicer]?’

When he [Spicer] got to Frank’s there was no one there.  He creaked his tortured way up the stairs, past the rotten banister,     to Pinkie’s room: the door stood open, vacancy stared in the swing mirror: no message, crumbs on the floor …   He moved     away: flakes of pastry under his foot  (83-84)

[Pinkie is rebuffed by Colleoni:] The gold cigar-lighter, the grey double-breasted waistcoat, the feeling of a racket     luxuriously successful for a moment dominated him: the brass bedstead upstairs, the little pot of violet ink on the     washstand, the flakes of sausage roll.  (99)

[Pinkie consults with Cubitt and Dallow:] Life was a series of complicated tactical exercises, as complicated as the     alignments at Waterloo, thought out on a brass bedstead among the crumbs of sausage roll.  (113)

The Boy led the way into the bed-sitting-room and turned on the single globe.  He thought of Colleoni’s room in the     Cosmopolitan.  But you had to begin somewhere.  He said [to Cubitt], ‘You’ve been eating on my bed again.’

These were the hours – when the races were not on, when there was no one to see on business – that he [Pinkie] spent stretched on the bed at Frank’s.  He’d eat a packet of chocolate or a sausage roll … (177)

The sausage roll isn’t mentioned again: the novel extends to page 250 but the milieu of Frank’s is well established by this point.

As an author famed for his Catholicism, Greene could of course have chosen the sausage roll as another image of original sin, the meaty soul enwrapped in the pastry body of degradation.

But his interest is as much social as theological.  John Carey notes how snobbish writers of Greene’s generation defined their social inferiors by their food.  No cooking goes on at Frank’s, as the residents subsist on takeaways. When Rose moves in she goes to light the stove first thing and meets Dallow:

She said: ‘I thought maybe I’d better light the stove.’

… He went to a dresser and pulled open a drawer.  ‘Why,’ he said, ‘what’s got you?  You don’t want a stove.  There’s plenty     here.’  Inside the drawer were stacks of tins: sardines, herrings.

He looked at her oddly.  ‘Anyone’d think you wanted work.  No one here wants any tea.  Why take the trouble?  There’s beer     in the cupboard, and Pinkie drinks the milk out of the bottle.’  (193)

In more recent times, we must remember the ‘pasty tax’ of 2012, seen by some as an act of class war.  Greene is often said to have been fascinated and repelled by popular culture: the novel refers to Woolworths, Warwick Deeping, seances, corned beef tins, tinned salmon (on which see Carey, p. 21, with reference to Greene), buns in paper bags, beer breath, slot machines, , the twopenny library, Film Fun, ‘Guinness Is Good For You’.

His unease, to my mind, is made concrete in the cold, congealed fat of the working man’s food.