Harold Pinter: A Line, A Word, An Image

Today we launch a Harold Pinter retrospective in our Second Floor Gallery as part of the wider anniversary season of events marking ten years since his death. Focusing on Pinter’s creative process, this free display of manuscript reproductions from his Archive offers glimpses of some of his most famous plays at various stages in their development. 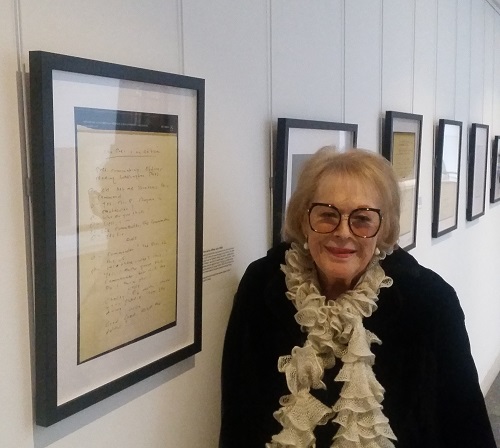 In his Nobel Prize speech of 2005 Pinter noted that ‘most of the plays are engendered by a line, a word, or an image’. It was usually, in fact, a word or phrase – ‘What have you done with the scissors?’ in the case of The Homecoming - that was the starting point, closely followed by an image, typically of a configuration of characters in a room. Inspiration having struck, Pinter would put pen to paper in pursuit of the fleeting figures, working out who they were through the circuitous evasions and revelations of quotidian dialogue though always resisting too deep a probe into their backstories. These adventures on paper are what is on show in this new display.

Seeing Pinter’s large, energetic handwriting filling the pages of his yellow legal pads transports us back to the moment of creation. There are intriguing false starts and changes of mind in evidence, such as a deliberation over where to set the opening scene of Betrayal (a tea shop, flat or a pub) and a diagram suggesting a third presence in the enigmatic two-hander Landscape. The naming of characters (always a secondary act for Pinter) is revealed on the page as initially anonymous As and Bs are christened in later annotations. And there are, of course, many pauses peppering the manuscript pages, always denoted by a lower case ‘p’. According to Pinter in his 1962 speech to the National Student Drama Festival it was in these silences that his characters became most evident to him.

Taking the structure of Pinter’s great play Betrayal as a model, the display offers a selective reverse chronology of Pinter’s playwriting career, taking in the last lines of his final stage play Celebration (written in 1999) as well as early prose pieces that influenced his theatre writing. For those who’ve seen any of the ongoing Pinter at the Pinter season by the Jamie Lloyd Company there are numerous resonances with our selections: we have reproduced the notecard on which Pinter scribbled the threatening lines from One For The Road, performed so memorably by Anthony Sher in the recent 'Pinter One', as well as a number of other drafts which will be familiar to fans of the season. My favourite inclusions, though, are perhaps the early prose pieces which contain the seeds of Pinter’s playwriting career. The pieces in question are a 1955 short story called ‘The Examination’ in which the menacing figure ‘Kullus’ can be seen as a prototype of the threatening interlopers of later plays, and a first draft of Pinter’s biographical novel of competitive male friendship The Dwarfs begun in 1952. Both offer crucial clues to the dramatist that Pinter became and both deserve to be better known.

Although it has been ten years since Pinter’s death on Christmas Eve 2008, his plays continue to speak to us about today’s world, sometimes in astonishingly prescient ways. Pictured above is Antonia Fraser who came to the Library this week for a preview of the exhibition. She stands alongside a dramatic sketch she discovered in 2017 when turning the page of one of Pinter’s old legal pads kept by the phone for messages. There to her astonishment was ‘The Pres and an Officer’, a short piece in which a trigger-happy President of the United States is eager to ‘nuke London’. Donald Trump was entirely unknown to Pinter, but now we know what Pinter would have made of him, so to speak. It seemed fitting to include ‘The Pres’ in our display as a ‘first last look’ (to quote Samuel Beckett’s words about Betrayal) among the other drafts and photographs now on show.

Harold Pinter: A Line, A Word, An Image is on display in the British Library Second Floor Gallery until 17 March 2019.