The Sun-Artist, the Typewriter and Bridge of the Ford

Sunlight, a big window, ruler, pencil, compass and tracing paper were the tools I used to write my first visual poems on sheets of white A4 paper – cutting and pasting, not on the computer, but with scissors and Prittstick. Written in 2005, these were freehand word-drawings of poems called ‘Mirrors’, ‘Many Selves’ and ‘Like Leaves on a Tree’.

In October 2009 a friend showed me the Olympia portable typewriter which she had bought in a charity shop. I looked at this object and a whole range of possibilities opened up in my mind. I borrowed her typewriter and set to work. The first poem I typed was ‘The Sun-Artist’. It required a huge amount of concentration not to make a mistake and have to start all over again. Later I copied ‘The Sun-Artist’ onto my computer.

The idea for this poem came from a visit to the Cross of Muiredach in Monasterboice, near Drogheda, one July evening in 2009. This is an elaborately carved High Cross made of sandstone, dating to the 10th century. Its sides are covered with panels of interlace reminiscent of the Book of Kells. The interlace usually looks faded, but the way the sun shone on it that evening made it look new again. I wanted to depict this interlace in a poem. I wrote the line ‘deepshadowed sunset renews fading patterns’. Then I used these words re-creating how the interlace appeared,  renewed by the evening sun.

My poetry moved increasingly from word-drawings to poetry which could be made on the typewriter and copied from there to computer. The best font for my work is Courier New, a font which gives equal space to each letter of the alphabet, just like the typewriter. I also realised that there were other possibilities on the computer: changing the size of the letters, line spacing, colour. Nowadays I use only the computer. However, my visual poems have been greatly influenced by my earlier engagement with the typewriter.

In 2013 Tony Frazer of Shearsman Books asked me if I had enough visual poems for a chapbook. I had and so I concentrated on gathering individual poems into a collection. The Sun-Artist was the title I gave to the chapbook. Several poems had already been published in poetry journals, which was great, but sometimes they were printed too small so that the reader could barely see the letters. The chapbook was my chance to put things right, to have the poems on the page exactly as I wanted them. I made a mock-up of the book and went in search of the right order for the eighteen poems I had chosen.

The manuscript became proofs which were emailed back and forth until everything had settled into place. The cover image is from a poem which was originally in red and black. About six weeks later the first copies of The Sun-Artist arrived in the post. It was an incredible feeling to turn the pages of this very slim book and read the poems again. 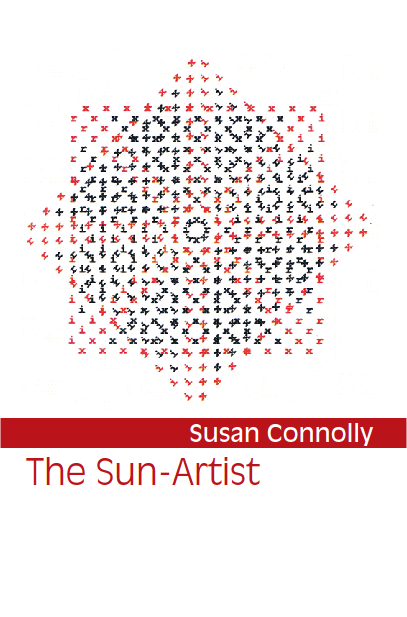 Cover page of The Sun-Artist.

With thanks to Susan Connolly for permission to use this image.

Bridge of the Ford has thirty-three visual poems. The book is in a larger than usual format to give the poems plenty of space. There are two sections: Bridge of the Ford and The Dream-Clock. The poems in the first part are arranged so that the reader can imagine drifting down the river Boyne in a boat, past the Neolithic tumulus of Dowth, past the mediaeval town of Drogheda (Droichead Átha / bridge of the ford) and out towards the sea. These sites are in my blood as I grew up and still live in this area.

And what happened to those lyric poems? Shearsman Books published them separately in a chapbook called The Orchard Keeper in 2017.