One thing I feel not sufficiently covered by the BL’s otherwise wonderful mini-exhibition on the life and works of P.G. Wodehouse, currently running in the treasures gallery, is his appeal beyond the Anglo-American world, both in English and in translation. Wodehouse’s popularity in India is well-known: a childhood friend of my father’s – and an avowed superfan of Jeeves and Wooster, Blandings & co – once recalled the sage advice given them by the English teacher at their Himalayan boarding school: “Want to write good English? Read P.G. Wodehouse!” But far less has been written about his appeal beyond the Anglosphere.

Initial research on Google revealed, among other things, a thesis by one Petronella Stille which was quite rightly concerned with the question of how Wodehouse’s Japanese translator, Morimura Tamaki, had  “adapted such…expressions such as Right ho’, ‘By Jove’, ‘Tinkerty Tonk’, ‘Dash it’ or ‘What ho’?”  Well, in case you are curious, the answer for the first example is ‘Yoshikita’. She also handily highlights some of the unique features of Wodehousian prose that make it so enchanting and absurd, and also difficult to translate, including my personal favourite, the ‘transferred epithet’, that is, the ‘strained forkful of salmon’, the ‘astonished cigarette’ falling from Bertie Wooster’s lips. Overall, she acknowledges both the heroic attempts of the translator whilst exploring in depth just what it is about this brand of humour that is so hard to recreate.

Inspired by this, I moved on to the BL catalogue to find out what translations there were in the collections, if any. Starting with a pre-1973 physical catalogue, I found a smattering of translations into Esperanto (La Princo kaj Betty), Italian (Jim di Piccadilly) Polish (Wielce zobowia̢zany Jeeves), and –in keeping with the Indian theme- Marathi, before finally finding some in a language I could understand, Portuguese. 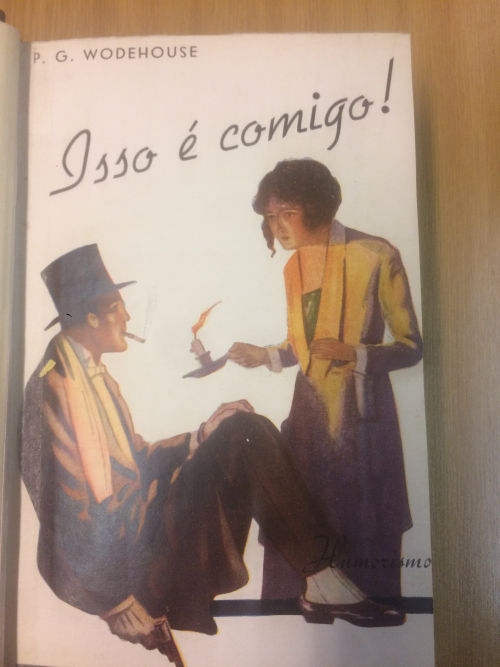 Isso é comigo! is the title of Edmundo Paula Rosa’s 1938 translation of Leave it to Psmith, originally published in 1923. From what I could tell, Rosa’s translation is fluid, and he seems to have had the skills to match not only the liveliness of the dialogue, but also the convoluted wit of Wodehouse’s descriptive prose. When translating Portuguese writing myself I often find myself marvelling at how the sentences can just go on and on, before then cursing the writer as I find myself torturously unpicking and reconstructing the sentences back into equally convoluted English. Perhaps, then, Portuguese is an equal match for Wodehouse’s opening, single-sentence paragraph:

“At the open window of the great library of Blandings castle, drooping like a wet sock, as was his habit when he had nothing to prop his spine against, the Earl of Emsworth, that amiable and boneheaded peer, stood gazing out over his domain.”

Rosa tackles this sentence admirably, adapting the wet sock simile, but preserving the structure of the sentence. But he leaves out ‘boneheaded’ entirely! And the quintessentially Wodehousian ‘Right ho!’ is paraphrased out of existence, leaving us with ‘Nesse caso, esta bem’ (“In that case, fine” or less literally, something like ‘As you see fit’). The meaning of ‘Right ho!’ in this context is more or less captured, but precious little else is. Rather interestingly, ‘your lordship’ is translated not into a Portuguese equivalent but into another English word, ‘milord’. One can only assume that for whatever the latter would have been more recognisable than the former to the Portuguese reader of 80 years ago.

There is, I’m sure, far more work to be done on this. But don’t believe people when they claim that Finnegans wake  or a similar tome is ‘untranslatable’. I suspect that even Joyce himself would have been flummoxed by ‘tinkerty tonk’!