To celebrate World Poetry Day, and 10 years of the Michael Marks Awards for Poetry Pamphlets, we have added four new readings to our Michael Marks playlist. 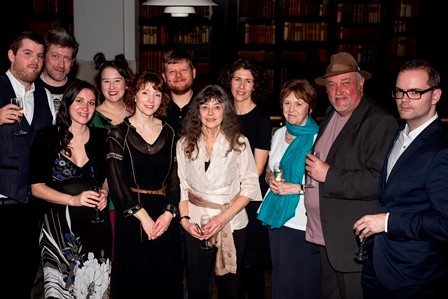 The judges and shortlisted poets and publishers for 2018 Michael Marks Awards. Photograph by Jonathon Vines

The readings are from four of the five shortlisted poets for the 2018 Michael Marks Poetry Award. In each of the recordings, our poets read from their pamphlet and also talk about the poems and the pamphlets.

Carol Rumens reads from ‘Bezdelki’, winner of the 2018 Michael Marks Award for Poetry. The title of the pamphlet, meaning ‘small things’, refers to a poem by Mandelstam, and the poems in the pamphlet are written in memory of Carol’s partner, Yuri Drobyshev. In this recording, Carol describes the pamphlet, and reads the poems ‘Vidua’, ‘Shapka and spider’, ‘He drank to naval anchors’, and ‘King Taharqa’s Last Thoughts’.  ‘Bezdelki’ is illustrated by Emma Wright and published by the Emma Press.

‘If Possible’, by Ian Parks and published by the Calder Valley Press, is a collection of translations of Constantine Cavafy, and poems inspired by Cavafy’s understanding and engagement with the stories and literature of Classical Greece. In this recording, Ian Parks reads, ‘Candles’, ‘Windows’, ‘Ithaka’, ‘The god abandons Antony’, ‘Come back’, and ‘The shades’.

Gina Wilson reads from her pamphlet, ‘It was and it wasn’t’, published by Mariscat Press. Gina explains that the poems in the pamphlet reveal the ‘rich uncertainty of all things’, with the poems often being about more than one thing at the same time. Gina reads, ‘Grit’, ‘Child’s play’, ‘I haven’t seen this boy before’, and ‘Reunion’.

These new readings join our recordings from the past four years of the Michael Marks Awards, including from past winners Richard Scott, Gill McEvoy and Charlotte Wetton.

Posted by Eleanor Dickens at 10:19 AM