by Sara Hale, AHRC Innovation Placement Fellow at the University of Manchester, working as part of the British Library's Heritage Made Digital project and the Modern Archives and Manuscripts department.

The British Library is currently undertaking a project to catalogue the Harley manuscripts collection for the first time since the early 19th century. Although one of the library’s foundation collections, the catalogue has not been updated since a four-volume printed edition was published in 1808­–1812. Improved descriptions in ‘Explore Archives and Manuscripts’ will make these items more easily discoverable by researchers and users.

This huge manuscript library was amassed by Robert Harley (1661–1724) and his son Edward Harley (1689–1741), 1st and 2nd earls of Oxford and Mortimer, and sold to the nation when the British Museum was established in 1753. Both Harleys were important literary figures and patrons of the arts, and their wide-ranging collection includes – among many other things – a number of important English literary manuscripts. 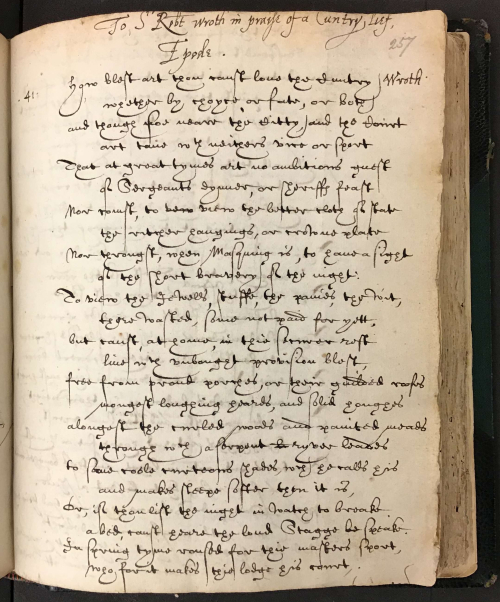 Among the items recently catalogued are a number of 17th-century verse miscellanies containing some of the best known authors of the period. Of these John Donne is by far the most prevalent. Known for writing for a small group (or ‘coterie’) of readers and preferring the privacy of manuscript to print, Donne was one of the most widely circulated poets of the 17th century. Other writers that frequently appear in these miscellanies include Ben Jonson, Thomas Carew, Thomas Randolph, William Habington, Sir Walter Ralegh, Francis Bacon, Robert Herrick, to name but a few. These manuscripts tell us much about how their poems were read, circulated and responded to. 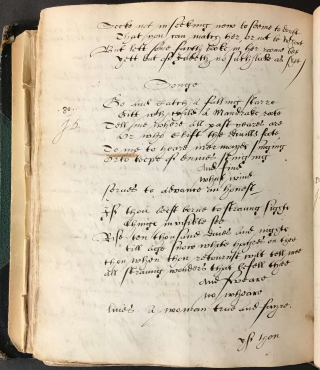 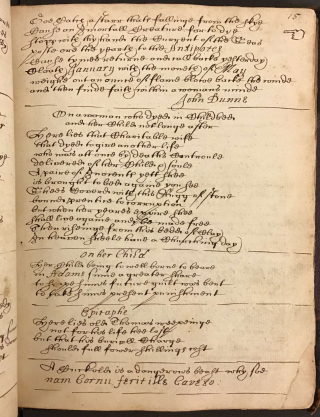 Study of manuscript circulation demonstrates how different versions of a text could co-exist outside of the certainty offered by print. Variations in wording or titles could result from a mistake or deliberate alteration by the copier, or have been duplicated from a variant manuscript copy. Harley MS 4064 (the ‘Harley Noel MS’) is a particularly important miscellany. It contains just under 50 poems by Donne and eight by Jonson in the hands of two professional scribes, including a copy of Donne’s ‘Song. Goe, and catch a falling starre’ attributed to ‘J.D.’. This poem appears in another form in the verse miscellany Harley MS 6057. Although attributed to ‘John Dunne’, an epigram beginning ‘Goe catch a starre that’s falling from the skye’ (indicated by the manicule in the top right corner in the image above) is actually a loose imitation of Donne’s original poem. 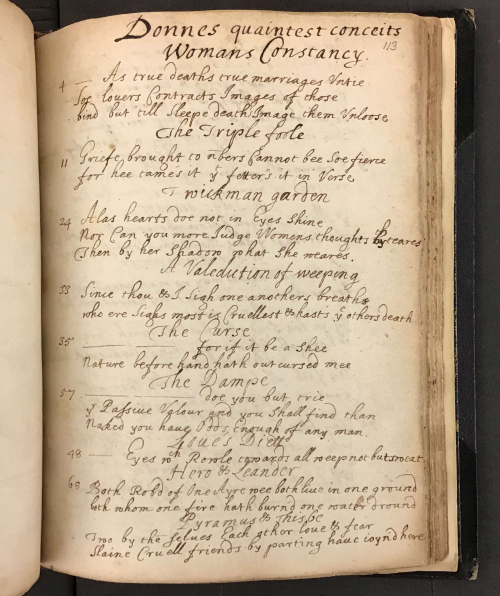 The advent of print publication also impacted manuscript practices. Harley MS 3991 gives an indication of the ways in which the two mediums could interact. Once owned by Thomas Rawlinson (1681–1725) and known as the ‘Harley Rawlinson MS’, this late 17th-century verse miscellany includes various poems, songs and extracts from plays transcribed by several hands. One section entitled ‘Donnes quaintest conceits’ (ff. 113r-115r) presents short extracts from 30 poems including ‘Woman’s Constancy’ and ‘A Valediction: of weeping’. In this case the reader has gone through the printed text of the 1635 and 1639 editions of Donne’s poems and transcribed passages they found particularly elegant or witty to read at their will.

Collected alongside the literary heavyweights of the period are the works of lesser known and anonymous authors. As well as three of Donne’s satires, Harley MS 5110 also includes an anonymous English tragedy entitled ‘Pelopidarum Secunda’, verse paraphrases of the Psalms and Book of Proverbs and a collection of Latin letters, poems and translations by schoolboy Milo Hobart. This composite volume contains an interesting range of texts. Also recorded are copies of late 16th-century Latin speeches by Elizabeth I (f. 9r-v), one delivering a forceful extempore rebuke to a Polish ambassador and another addressing academics at Oxford University. 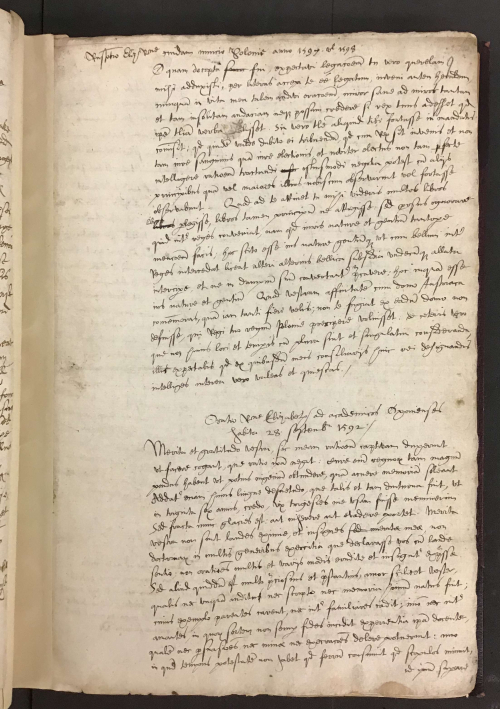 In many cases it can be hard to trace the ownership of these miscellanies, but some were clearly compiled by or for particular people. Harley MS 3511, for instance, was compiled by English statesman Arthur Capell (1631–1683), 1st Earl of Essex. Capell inscribed his name at the beginning of the volume (f. 1*), which includes many poems by Donne, Carew, Habington and Randolph. Such inscriptions sometimes took unusual forms. In the 1630s one Thomas Crosse inscribed his name in Harley MS 6057 in the form of ‘An Acrosticke upon my name’ – a poem in which the first letter of each line forms his name. Unfortunately nothing further is known about Crosse, but this volume shows how miscellanies could move between various different owners. The previous folio contains a deleted acrostic on the name ‘Edward’, and the name ‘Samuell Snoden’ is inscribed towards the end of the volume and dated 1670. 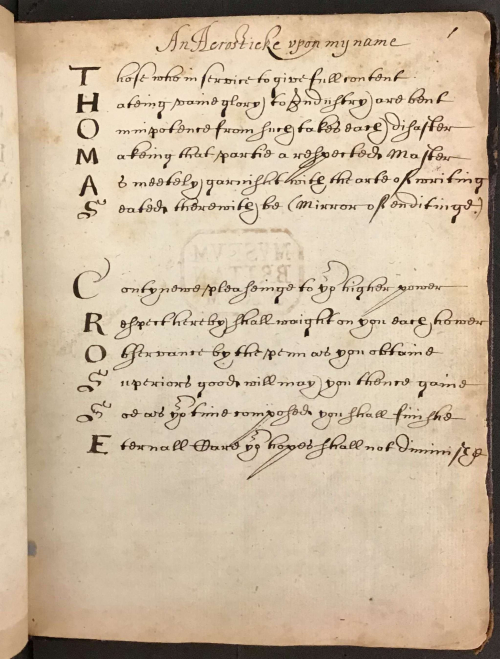 Even this small selection gives an insight into the practice and importance of manuscript circulation in 17th-century literary culture, and the private literary world built on social relationships that poets such as Donne, Jonson, Carew and their readers inhabited.

Posted by Eleanor Dickens at 9:00 AM