‘What Do I Know About Beckett?’: B.S. Johnson’s Beckett Notebook

a guest blog by Patrick Armstrong, a PhD candidate at the University of Cambridge.The Papers of BS Johnson are available to consult in the Manuscripts Reading Room (Add MS 89001).  Learn more about some of the Libraries collections related to Beckett and Johnson here.

B.S. Johnson’s Samuel Beckett notebooks perform an act of remembering. Principally, Johnson wonders what it is possible for him to know about Beckett, an epistemological problem he tries to work out through writing. The scraps of paper and notebook entries show Johnson trying to remember all he can about his onetime friend and major influence: when he read his work, who he was with, what it meant to him at the time.

Johnson’s idea of writing a literary biography of Beckett aligns with his famous authorial declarations. In The Unfortunates (1969), for example, he writes ‘in general, generalization is to lie, to tell lies’, while similarly, in Albert Angelo (1964), the narrator states that ‘telling stories is telling lies’. The notes, written mainly between 1971 and 1973, show Johnson instructing himself on how to write truthfully, without 'generalisation': 'Work conversation into this – as exactly as I can remember – use as interludes in conjecture material, in different type – that is, it is part of the “no generalisation” idea, which […] stated very carefully – somewhere – It was in MURPHY […] that I first saw the word SOLIPSISM'. 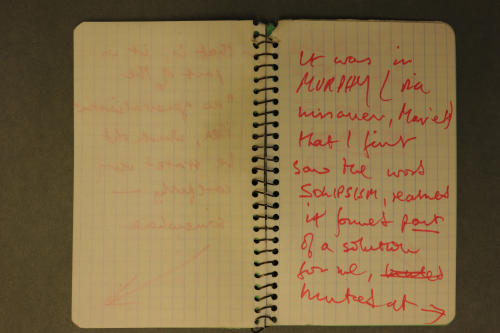 A page from Johnson's small pocket-book detailing his first encounter with 'solipsism' (Add MS 89001/8/8). All images reproduced with the kind permission of the BS Johnson Estate.

In philosophical terms, solipsism is the theory that one’s own self or consciousness is all that exists or all that can be known. Initially encountered in Beckett’s witty early prose (Murphy is described as a ‘seedy solipsist’), the word offers Johnson ‘a mode of being’ and, crucially, ‘a mode of GOING ON’ (a reference to Beckett’s later, post-war prose). The evocative term is then connected with the process of biographical writing, as Johnson states:

'Experiment/Venture into BIOGRAPHY
What do I know about BECKETT?
Solipsistically
i.e. only what he told me/what I saw for myself CAN BE ACCEPTED as true.' 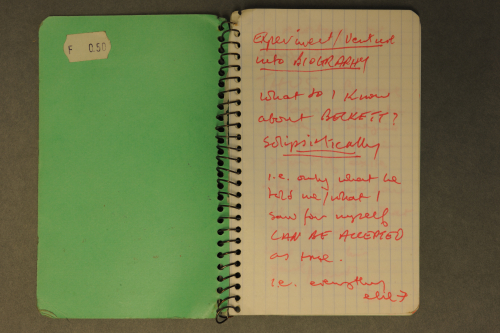 A page from Johnson's small pocket-book where he thinks through the limits of the biographical form (Add MS 89001/8/8). All images reproduced with the kind permission of the BS Johnson Estate.

The confessional mode seems to have become the only truthful method of writing, as for Johnson all that can be known about Beckett is what he himself saw and heard. Thinking about Beckett sharpens Johnson’s own conception of his literary project; it allows him to work out his own position, offering a means of finding an acceptable form, as Beckett put it, ‘to accommodate the mess’. The ‘idea’ (one small green notebook purchased in Paris is simply entitled ‘Beckett Idea’) of writing a biography becomes an expansive, Proustian process of remembering one’s own life: ‘How everything gets tied in with everything, how here I am trying to write about Sam, and it is [he lists other friends] - just to get it down before I forget it, for some bits of it no one else could get down, obviously. […] All is digression’. The potential biography becomes a kind of autobiography, a project in both solipsistic remembrance and Sternean digression. Does Johnson genuinely consider writing a biography of Beckett, or does he instead use the ‘venture’ and ‘experiment’ of doing so as a prompt for memory and material, as a mode of ‘going on’?

Evidently, Johnson had a deep affinity with Beckett’s thought, and the Irish writer’s life and work seems to intimately intertwine with Johnson’s own. The latter even associates space with Beckett’s company: ‘The way B came to the Hotel […] the way I associate that little waiting room with him – no, with his PRESENCE.’ The writing is self-corrective, as ‘him’ becomes the more impressive and aggrandizing ‘his presence’. As Jonathan Coe writes in his biography of Johnson, Like A Fiery Elephant: The Story of B.S. Johnson (2004), ‘the friendship of Beckett, his unfailing kindness and supportiveness, would become one of the cornerstones of Johnson’s life’. On several occasions, Beckett’s work uncannily ‘fitted’ Johnson, connecting to his own experiences in unexpected ways. On seeing Waiting for Godot for the first time in Autumn of 1955, Johnson modestly recalls how it ‘echoed (+ said more + better than I could) things I had been talking […] about before we went in’. Another time, when he telephones his girlfriend to say that it is ‘all finished’, Johnson remembers holding his colourful copy of Watt in the phone box, describing its ‘splendid purple/blue/pink’ jacket and ‘bloodred cut paper’. In reference to his separation, Johnson declares: ‘Beckett’s solipsism/stoicism fitted! […] I read him with an intensity to try to shut out what she had done’. The two ‘isms’ separated by an oblique stroke, stoicism and solipsism, are arguably two of the most important concepts that Johnson takes from Beckett.

A year after first seeing Godot,Johnson remembers being in a Parisian bookshop unable to afford a copy of Molloy. Still drawn to the book, he sifts through the first few pages in the bookshop: ‘read and felt the first few pages’. Like the memory of holding his copy of Watt, the experience seems both tactile and emotional. This emotive episode is ironic given that the notes reveal how Beckett, well-off after winning the Nobel prize, later offered and sent money to the struggling writer in London. This is the same kind and generous Beckett that we find in his letters, and in André Bernold’s portrait of the author in Beckett’s Friendship (2015). Johnson’s note that Beckett ‘again offered financial help’ are eerily the last words recorded in the notebook. In fact, when reading through these notes, their temporal closeness to Johnson’s suicide in November of 1973 is hard to ignore. Of a notebook with 144 leaves, just ten are written on, and there is a sadness about the mostly empty book. Johnson and Beckett eventually fell out after the former assured his publishers that they could use some of Beckett’s enthusiastic comments about his work (‘a most gifted writer’) as an endorsement on the dust jacket of Christie Malry’s Own Double-Entry (1973).

Yet, Beckett’s influence permeates Johnson’s notes - one loose scrap of paper could be mistaken for one of Beckett’s mirlitonnades, an irregular small poem. In addition, there are notes (something about Joyce and Yeats) on the back of receipts from French restaurants, specifically ‘Le Moulin Noyé’ in Glénic (Creuse), which is, appropriately, a ‘Hôtel isolé’: a solitary, solipsistic residence. On another scrap of paper Johnson reveals how significant he finds Beckett’s ‘idiosyncratic’ use of words: 'once when I rang him about 11.30am he said “Could you ring back? I’m trying to wash myself” Am I alone in finding that idiosyncratic? Or does all he say seem significant for me in the light of what I know he is, of what I believe him to be?' 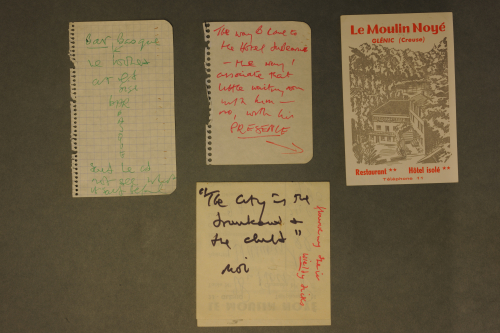 A collection of receipts and loose-leaf scraps on which Johnson recorded his thoughts about the biography of Beckett (Add MS 89001/8/8). All images reproduced with the kind permission of the BS Johnson Estate.

Again, there is the sense of doubt about what Johnson knows of Beckett, as he corrects himself with the verb ‘believe’. Yet, it is arguably this belief in the significance of Beckett’s language and thought that provided Johnson with a fitting mode of writing.

Posted by Eleanor Dickens at 9:21 AM