Gill Partington, host of last week’s sell out Artists’ Books Now: Writing evening, shares some of her thoughts on the event the works and the artist in this guest blog 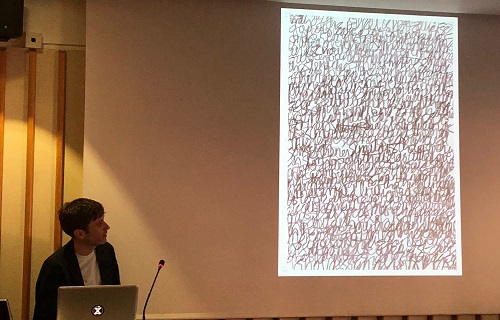 Making Your Mark, the British Library’s current exhibition, is all about writing, its long history and the many varied techniques, systems and conventions that have evolved around it.  The latest event in the ‘Artists Book Now’ series on the 13th May approached writing from a different angle, however. It was all about forms of work that stretch these systems and conventions in unusual ways, pushing writing to its limits and beyond. The four artists presenting their work showed us some varieties of writing that sometimes looked very unfamiliar indeed. 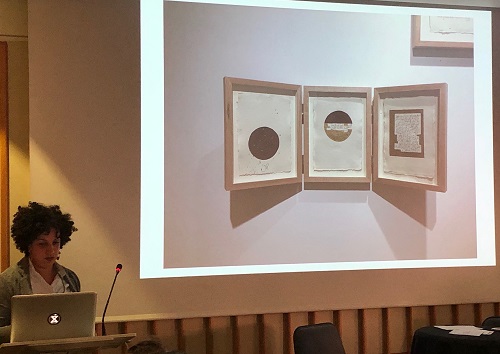 Dia Batal’s work is as much sculpture as writing, rendering Arabic script physical and three dimensional in metalwork and other media. The letters may be ornate but the materials have a strength and presence, perhaps because the force and impact of writing are her primary concern, dealing in text that details harrowing stories of conflict and displacement. Sam Winston creates work that hovers on the boundaries of drawing and writing, in durational performances that often take place in the dark, gradually covering the page surface in an intricate, unreadable filigree of pencil lines. Stevie Ronnie turned writing into a series of incongruous, witty objects: an ‘audiobook’, for instance, comprising a rope woven from strips of text.  Wound around a metal winch, it unravels, translating text into metallic clinks. Joumana Medlej created delicate folded paper forms adorned with the Kufic script, an Arabic calligraphy not meant to be read, but which instead has a symbolic potency, an aura rather than a literal meaning. These were diagrams and cosmological charts as much as texts. 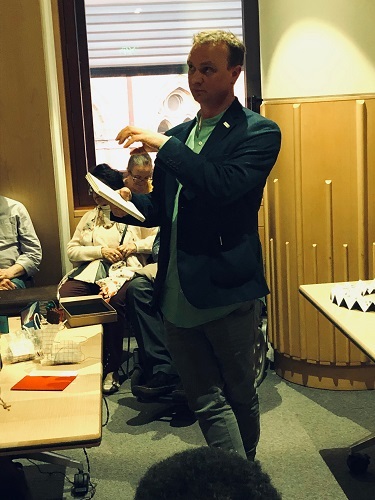 Stevie Ronnie’s infectious enthusiasm as he describes how employs a range of objects in the creation of an artists’ book.

In their various ways, these were all forms of ‘asemic’ writing:  that which can’t be read. The work seemed to ask the question of how writing communicates in other ways, and whether it needs to communicate at all. Does writing need a reader? The other major theme that emerged from the evening was that of discipline, and where exactly writing belongs. Maria Fusco, Professor of Fine Art at Northumbria University talked about what happens when writing becomes an art practice rather than a literary one. She read from her new book, Nine QWERTY Bells: Fiction for Live Voice in which she puts art objects in strange kinds of dialogue with one another. 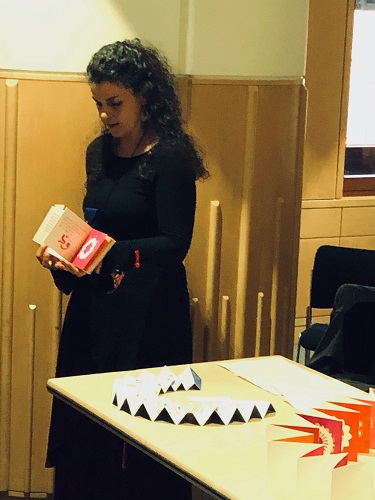 The particular piece she chose focused on Ignacio Uriarte’s The History of the Typewriter Recited by Michael Winslow a video artwork in which the sounds of vintage typewriters are recreated orally, with uncanny accuracy. Maria’s reading was all about tracing this complicated network of crossed wires between voice, writing and object. Her aim is not to write about art, but rather to write through it, she explained. She described writing moving backwards through the gallery space and ‘bumping into things’. This collision between writing and objects - and the conjunctions that result from it - seemed to be what the evening was all about. Writing, we learned, can be stranger than you think. 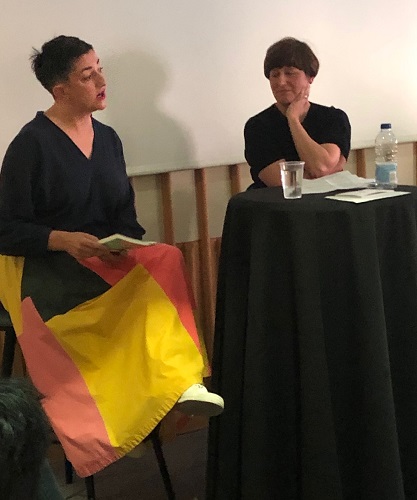