Shame Deferred and Shame Transcended: Literary Reflections at the End of Pride Month

by Callum McKean, Curator of Contemporary Literary Archives and Manuscripts. To learn more about LGBT works and issues in the Library's collections, take a look at our web space, LBTQ Histories. To learn more about E.M Forster's gay fiction, click here. All British Library items are available to view, for free, in our Reading Rooms.

After the success A Passage to India (1924), it appeared to almost everyone that E.M Forster had stopped writing. In fact, he had merely stopped publishing. From 1913 onwards Forster had been working on a manuscript about same-sex love – sparked by a titillating encounter with the poet Edward Carpenter, who secretly touched Forster on the backside at a party. Forster showed typescripts of his novel, Maurice, to close friends, including Christopher Isherwood, who implored him to find a publisher. But Forster – convinced that attitudes towards homosexuality had shifted only from ‘ignorance and terror to familiarity and contempt’ – was reluctant to publish: on the cover of a typescript draft found in a drawer after his death, Forster famously scrawled in pen, writing to himself or to the world, ‘Publishable – but is it worth it?’

This tension between the public and private realms – between what belongs to the world at large and what belongs to a small, highly controlled audience – runs throughout Maurice. Images of darkness abound: Maurice’s desire for his classmate Clive Durham leads him to grope his way down unlit college corridors to find his room; his first night alone with the under-gamekeeper Alec Scudder takes place at night, secretly, away from the main house, with the two lovers fumbling their way across a dark field. Similarly, the tight societal gaze which Maurice feels all around him is punctuated by fantasies of a life outside it – France, Italy, where the rules persecuting same-sex relationships are more lax – or self-exile to some imagined place outside of society, outside of a world which Forster increasingly felt, as he wrote in a post-script to the same draft, offered ‘no forest or fell to escape to […], no cave in which to curl up’. 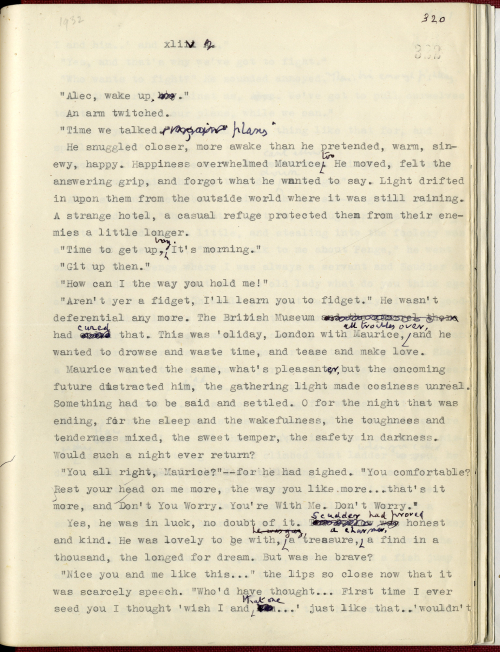 Typescript of the 1932 version of Maurice by E M Forster, with autograph manuscript alterations and additions made c. 1959 © The Provost and Scholars of King’s College, Cambridge and The Society of Authors as the E.M. Forster Estate. You may not use the material for commercial purposes. Please credit the copyright holder when reusing this work. Shelfmark: vol. 4/1

But fiction, unlike life, can offer respite, and it is precisely to this kind of impossible place of escape that Forster sends his two lovers; to live out a rural secluded existence as woodcutters. ‘A happy ending was imperative’, Forster writes, ‘I was determined that in fiction anyway two men should fall in love and remain in it for the ever and ever that fiction allows, and in this sense Maurice and Alec still roam the greenwood’. Sarah Ahmed, in Shame and Its Sisters (1995) describes the peculiar allure of this turning away from society into seclusion as a reaction to traumatic shame: ‘The individuation of shame — the way it turns the self against and towards the self’, Ahmed writes, ‘can be linked precisely to the inter-corporeality and sociality of shame experiences. The “apartness” of the subject is intensified in the return of the gaze; apartness is felt in the moment of exposure to others, an exposure that is wounding’. But Forster’s ‘greenwood’ –  like all utopias – exists in the shadow of its own limits. Forster’s original ending sees Maurice and Alec pursued by Kitty, Maurice’s hateful sister. In its final scene they discuss moving on from the home they have built in order to avoid being seen and discovered by her, echoing Ahmed’s formulation. Suddenly this world outside of 'the world' is revealed to be something else entirely: a marginal fantasy teetering on the edge of catastrophic collapse at the hands of a hostile host culture. That such a fantasy could approach the upper limit of what Forster could imagine as a ‘happy ending’ is unsurprising given the violent homophobia of the time and place that he lived, but nevertheless this apartness – at least now, for us – becomes untenable; it is a shame deferred, rather than transcended.

And it has a long history.  Early modern manuscript culture also sought refuge against the vulgarity of the printing press and the public view by valourising certain kinds of apartness, by distributing sensitive manuscripts amongst their enlightened peers. The poetry of John Donne, perhaps the most famous example of a writer in this mould, returns again and again to images of clandestine mixing in the interstices of his host culture: the body of his famous Flea ("It sucked me first, and now sucks thee/And in this flea our two bloods mingled be") is precisely this kind of space – a parasitic, almost invisible chamber where the vital fluids of ambiguously gendered speaker and addressee can mix in undisturbed, fluid freedom, even whilst the the human beings themselves remain at an ‘appropriate’  distance from one another. 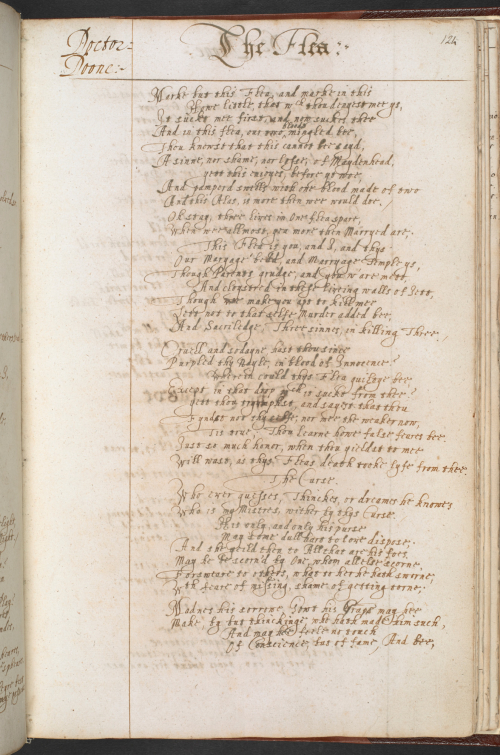 Shakespeare’s ‘Fair Youth’ sonnets were similarly addressed directly to the object of the speaker’s desire, a handsome young man, and although they were written in the 1590s they weren’t published until 1609 (perhaps, it has been argued, without the author’s permission). Oscar Wilde’s employment of these Sonnets at his public trial – as an example of a kind of same-sex love which was permissible and even instructive – failed to persuade the public, though, and this most famous of literary figures was himself forced into a brutal and violent exile in Reading Gaol, as Forster – then just sixteen years old – watched on in horror. Wilde’s letter to Lord Alfred Douglas, which would become De Profundis (1897), was a literary work composed under enforced isolation. Wilde's guard offered him three sheets of paper at a time to write a letter which he was not allowed to send, as a kind of therapeutic exercise which could contribute to his ‘rehabilitation’. Our image of Wilde – one of the most public of public figures – consigned to Reading Gaol, writing a letter to himself ‘from the depths’ about a ‘love which dare not speak its name’ provides a shadowy counterpoint to the ‘apartness’ of Forster’s idyllic ‘greenwood’, where Maurice and Alec live out their isolated lives. For both the gaol and the idyll, it is the logic of shame, secrecy and a life apart from the world that are the driving force. 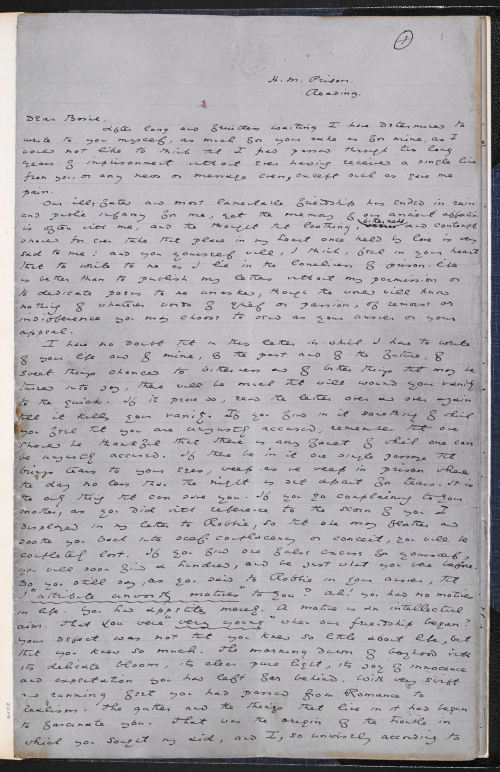 Contemporary popular culture and literature has worked to transcend this logic in its representations of same-sex love. Pride as a proper noun, beginning in the mid-twentieth century and gaining momentum ever since, has become a worldwide phenomenon. If E.M Forster’s adolescence was marked by Oscar Wilde’s trial and imprisonment, today’s adolescents – in some of the world at least – watch thousands of brightly dressed and exuberant people march in their name; delighting at being seen. This is not to say that work is done, far from it, only that the move from ‘Shame’ to ‘Pride’ – however partial -- has been hard won and should be celebrated. In researching this blog, I became curious about the kinds of narratives which LGBT adolescents are exposed to today, and so stumbled across a Young Adult anthology – out this year from Stripes Publishing and compiled by Juno Dawson – which was recently taken into the Library through Legal Deposit, titled Proud (2019). The anthology is peppered with 'coming out' stories which detail the turmoil and anxiety which can arise, even in relatively ‘progressive’ households for children of mostly well-meaning parents. One such story is ‘Penguins’ by Simon James Green, in which the protagonist, Cameron, has his attempts to come out overshadowed by a public furore around a pair of gay penguins at the local zoo. Cameron reluctantly visits the penguins’ enclosure with his friends and winces at the spectacle which surrounds them, regretting that something like this still represents an ‘event’ at all. A parallel plot follows his budding crush on a schoolmate as they approach their end of year prom, and both plot lines converge in a secret kiss inside the now-private penguin enclosure (with the gay penguins having been placed out of the way to avoid adding to their stress as they attempt to raise an abandoned egg together). At this moment some readers may expect a quick closure, with both same-sex loves safely contained within their enclosure, hidden from the world. But it is Green’s willingness to push beyond this moment of apartness, perhaps more than anything else, which marks the story as of our particular historical moment. After the revelation that Cameron’s feelings are shared by his crush, and their first kiss, the couple emerge from the sealed enclosure and return – holding hands – into the most public of teenage arenas, the prom. The prevalence and importance of these motifs are clearly related to our networked, public lives, where privacy is increasingly eroded in favour of display, revelation and performance. But technological contingencies aside, it is difficult -- especially in this context -- not to feel this story as heartening; to feel the relief and release of shame transcended and not deferred; and to feel that to have stories like these in the hands and minds of young people is a step in the right direction.

Posted by Eleanor Dickens at 2:41 PM