The British Library is proud to be a part of Falmouth Art Gallery’s ‘Stuff and Nonsense’ exhibition, open until 7th September 2019. The exhibition celebrates the nonsensical and fantastical, and features art, automata and works by Quentin Blake, Lewis Carroll and Edward Lear. The British Library has loaned a number of objects to the exhibition, including a diary written by Lewis Carroll and Edward Lear’s History of the families of the Lake Pipplepopple. 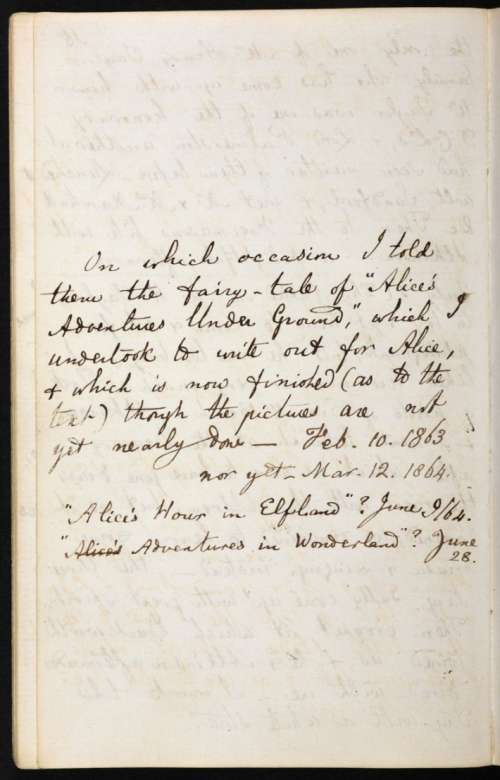 Charles Dodgson, better known by his pen name Lewis Carroll, kept this diary from 1862 to 1864 and within its pages we can find details of the origins of the much loved classic, Alice in Wonderland. The volume includes a number of references to ‘Alice’s Adventures Underground’, including Carroll’s first telling of the story to Alice, Lorina and Edith Liddell on a boat trip in July 1862. The diary also documents Alice in Wonderland’s move from manuscript to print. Carroll writes of his difficulty finishing the illustrations for the manuscript copy written for Alice Liddell and notes that his friends have encouraged him to publish the work. In April 1864, Dodgson writes in his diary that artist John Tenniel has agreed to illustrate the published text.

Edward Lear wrote History of the Families of the Lake Pipplepopple in 1865 and the manuscript, along with his illustrations, was gifted to the children of William, 6th Earl Fitzwilliam. History of the Families of the Lake Pipplepopple is a charming yet macabre story of the demise of the young animals of Lake Pipplepopple who ignore their parents’ advice. The seven young guinea pigs, for example, are warned to eat lettuce ‘not greedily but calmly’ but the young guinea pigs rush at the lettuce ‘with such extreme force’ that they bang their heads against the stalk and die of concussion.

The manuscript also contains Lear’s illustrations for his nonsense alphabet, and his illustrated version of the nursery rhyme 'Highdiddle-diddle'. 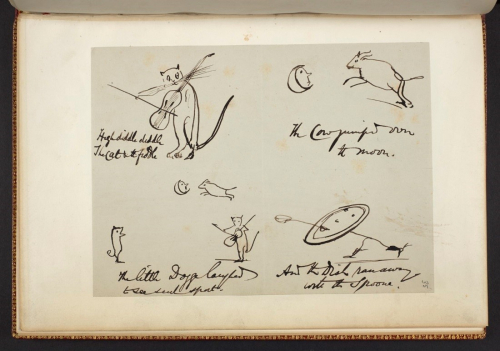 Also on loan from the British Library is A Book of Nonsense by Edward Lear. This book, first published in 1846, was adapted from limericks Lear told to the children of Lord Stanley while staying with the family. The book popularised the limerick from of poetry and nonsense verse has been closely associated with children’s books ever since. This edition from 1861 was enlarged with ‘42 new & enchanting subjects’ and was the first to credit Edward Lear as the author. 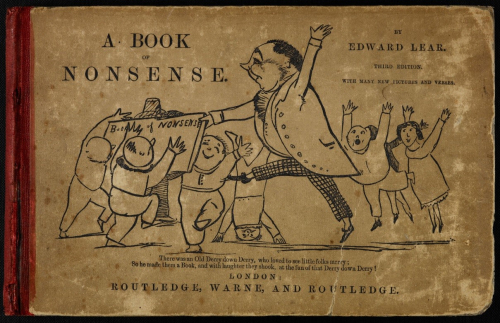