“That was our place.” - The Cambridge of Sylvia Plath and Ted Hughes

by guest blogger Di Beddow, PhD student at Queen Mary, University of London, researching Ted Hughes and Sylvia Plath in Cambridge. The notebook containing the Hughes poem 'Cambridge Was Our Courtship' (Add MS 88918/1/2) is currently on display in the Library's Treasures Gallery, and available to view -- in part -- through our Discovering Literature site. 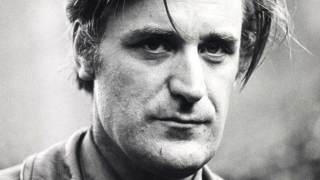 Ted Hughes omitted from Birthday Letters the poem simply known as “X” [1] which can be found in a notebook in the British Library.  It begins -

Cambridge was our courtship.
Not the colleges, or such precincts,
But everything from the Millbridge
Towards Grantchester.

The Cambridge of Plath and Hughes, as pictured in Birthday Letters (Hughes’s award winning 1998 poetry collection) is a place where the university and the academic life of the city are all but absent.  The landscapes of Hughes’s earlier poetry are also largely missing. No untamed Ireland, primitive or rural Devon; no ancient Elmet here, indeed, when such landscapes do make an appearance they tend to be used as a backdrop only for the central player on stage, who like Godot, never arrives. Sylvia Plath, Hughes’s first wife is however very much present in the poetry. Erica Wagner recounts in Ariel’s Gift [2] that Hughes in writing the work was not consciously writing poems, but the process was essentially about trying to, “evoke (her) presence to myself, and to feel her there listening.” [3] The collection travels from Spain to America, home to Devon and to Yorkshire, but when looking at the importance of Cambridge in Hughes’s work, the poem “X” has offered an entirely new and different pathway through the university city of the two poets and through Birthday Letters itself.

“Cambridge was our Courtship”, was brought to light by an article in The Times on Friday October 17 2008 (p.18) entitled “Rough-hewn genius of Hughes laid bare in unfinished verses”.  Jamie Andrews from The British Library is quoted at the time, as saying the poem was probably omitted from the final selection to balance the poems between earlier and later life.  We remember though as well that Hughes said the writing of the poems over the years was done with no view of publication and indeed in a letter to Keith Sagar, he reflects that, Hughes writes:

'I wrote them, months often years apart, never thinking of them as parts of a whole - just as opportunities to write in a simple, unguarded, intimate way - to release something!  Nor can I recall how I came to shuffle them into that order - following chronology of subject matter was the only rule, I think. [4]

It is important to note that this poem -- 'X' --  has no amendments, but is simply written out as though from dictation. The other poems in the exercise book bear the scars of much reworking, so this one was surely not omitted from Birthday Letters for lack of quality; it would seem that this significant poem is left out of the collection because it is so localised, too personal and specific.  Unless you live or had lived in Cambridge, this area of the city and its boundaries would not be known or be of any real importance to you.

From the Millbridge the Cam flows through Coe Fen on the left bank, a green grazing area with small tributaries and sluices, rough pasture and meadow vegetation. On the right, as you walk away from the city, the meadows open out into Sheep’s Green and the old course of the Cam, underneath Fen Causeway and across to Lammas Land; the river then strikes out to skirt around Newnham and then on to Grantchester Meadows.  Hughes describes this area as:

Ornamented with willows, and green level,
Full drooping willows and rushes, and mallard and swans,
Or stumpy pollard willows and the dank silence
Of the slippery lapsing Cam.  That was our place. 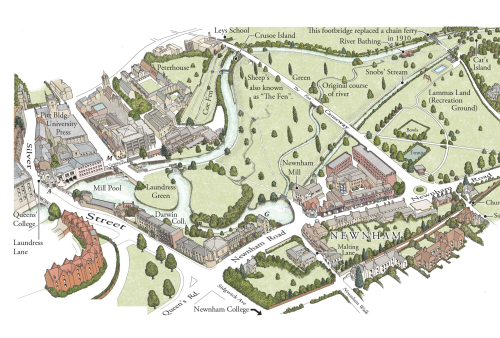 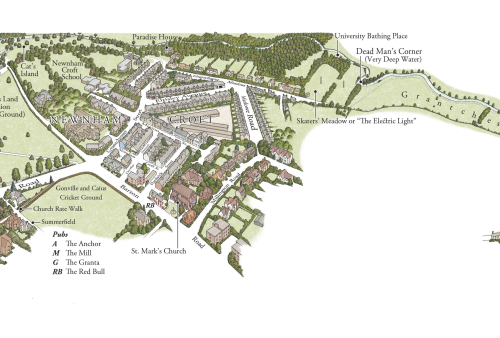 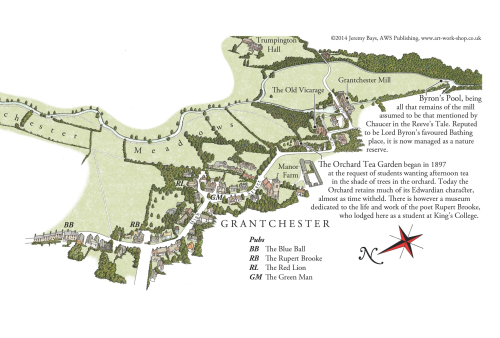 Three maps showing the topography and layout of Cambridge, and especially the districts recorded in Hughes's poem, much as he and Plath would have known it. Copyright Jeremy Bays - awspublishing.

The absolute alliteration of “willows” and the sibilance throughout the poem describes the Cam as a slow and natural river, with a wildlife that takes us away from the hard consonants of “Cambridge … courtship” and “colleges” which seem alien to the pair. Instead, Hughes focuses on the wildlife of the meadows; the three part description of the willows, for example, is significant: first they ornament the fen and one is reminded of Plath’s description in “Watercolor of Grantchester Meadows” : “It is a country on a nursery plate.” [5]  There is something quaint and unreal about the picture of river, willows and cows.  Then the second set of willows here are “Full drooping” almost Pre-Raphaelite in their evocation of sadness and elegiac fecundity.  Finally in the set of three, the willows have become, “stumpy pollard” and cut back much like the archaic symbolism of rebirth that enthralled Hughes, for example in his description of Shamanism in “Regenerations” in Winter Pollen:

'a magical death, then dismemberment…From this nadir, the shaman is resurrected, with new insides, a new body created for him by the spirits. [6]

This tone chimes with the “dank silence” of this environment, which suggests dark, dampness and decay, not an appropriate place for courtship and love one would have thought. The poets appear to have chosen this as their Cambridge because it was, “Not spoiled by precedent, for either of us.”  In this landscape they do not need to match expectations of the past, or of academia, but instead they indulged their love “In the watery weedy dream” which as Hughes describes, is metaphorically, “An aquarium”. In this watery world Hughes, as ever, knows his geography, that Cambridge rises only slightly above sea-level with much of the fens to the north, falling below sea-level:

Waltzing figures, among glimpses
Of crumbling parapets, a horizon
Sinking below sea level.

Flat and low-lying, Cambridge is depicted by Hughes as a water land from a dream, with other people beyond the couple merely performing a dance across the set.  The scenery and the horizon for Hughes is like an ancient monument of ruins, which has little relevance to him and his lover, indeed there is a nightmarish and chthonic quality to the vision. He weaves a spell of this scene with a perpetual repetition of “w” showing that their place was “willows…watery weedy dream…Waltzing figures…world…we…what…when…were,” and “wings.”  The poem finishes with a final rhetorical question:

We did not know what wings felt like.
Were what we felt wings?

The “word shapes” they made here, particularly Plath’s, concentrate on this piece of land and its nature. She uses the meadows in “Watercolor of Grantchester Meadows” to show how the idyllic university vision of Cambridge also bears the threat of the owl hunting the rat; it is here that Hughes suggests she hides “The Earthenware Head” which she narrates in 1959 and he uses again in Birthday Letters citing the spot where they placed it:

… Just past where the field
Broadens and the path strays up to the right
To lose the river and puzzle for Grantchester,
A chosen willow leaned towards the water. [7]

Again in “Chaucer” Hughes celebrates Plath’s performance of The Canterbury Tales to the cows in the Meadows.  He admits that they were enthralled, “twenty cows stayed with you hypnotised.” [8] Hughes recognised that Plath was very different to the history of the Cambridge colleges:

The Colleges lifted their heads.  It did seem
You disturbed something just perfected” [9]

Hughes contends that both poets started to formulate their futures, there, along the Cam and across the meadows. In Birthday Letters he returns to this place to settle in himself his responsibility for the vision of a shared future,that like the university in the poem, becomes, “crumbling parapets” and sunken horizons.  Poem “X” omitted from the collection, for me, conjures up the Cambridge of arguably English Literature’s most famous couple.  In a languid flow of the Cam’s willows and a “watery weedy dream” we find a landscape as personal and compelling as any that Hughes wrote of in earlier works.

[1]Ted Hughes “X” in notebook of the Hughes collection, labelled “18 Rugby Street” (Add. MS 88918/1/6 in the British Library) and published in an article in The Times  p.18 “Rough-hewn genius of Hughes laid bare in unfinished verses” Friday October 17 2008