The Banning of a Man and the Making of a Book: The Walter Rodney Affair, 1968

by Naomi Oppenheim, AHRC Collaborative Doctoral Student, British Library and UCL. Researching Caribbean print cultures and the politics of history in post-war Britain. Follow her on Twitter @naomioppenheim. All materials mentioned here are available to consult, for free, in our Reading Rooms. This blog forms part of Banned Books Week.  Let us know what banned book you’ll be reading this week and keep an eye on the Library's Americas and European blogs for more.

Sitting on an aeroplane upon returning from Montreal where he attended a Congress of Black Writers, Dr. Walter Rodney was declared a persona non grata by the Jamaican government and denied entry into Jamaica. The Guyanese historian and Black Power activist was also dismissed from his post (lecturer in African history) at the University of the West Indies, Mona. In a ‘snap interview,’ on 15 October 1968, onboard the grounded aircraft that was he was prohibited from leaving, Rodney stated that ‘“This is no surprise to me. I have discovered that in Jamaica to be a black man is dangerous.”’ 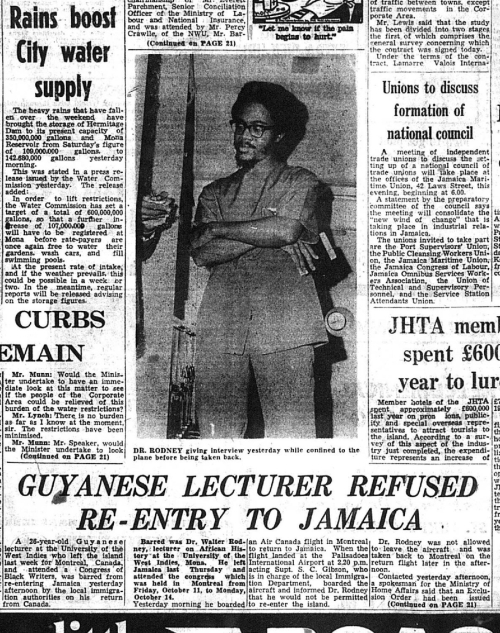 Prime Minister, Hugh Shearer, accused Rodney of being ‘at the centre of plots and plans to promote a Castro-type revolution in Jamaica.’ In fact, Rodney was under surveillance by the Special Branch of the Jamaican police force months before he was banned. This was symptomatic of the Cold War politics that characterised this period. Jamaica’s new governing elite feared Rodney’s capacity to bridge academic and urban political thought and action. Not your typical lecturer, Rodney dedicated his intellectual energy towards Jamaica’s Rastafarians. Rodney would give ‘reasonings,’ in poor communities in Kingston and around the island. Known as ‘groundings’ within the Rastafarian community, they were informal discussions that would take place in gullies (where squatters lived), schools, churches, and trade union halls. Rodney would listen and talk about African history, Black Power, and the failings of the neocolonial class.

The banning of Rodney – physically and ideologically – was part a long history of banning radical texts, newspapers, people, and ideas in the Caribbean. In the early twentieth century, as nationalist politics developed across the region, censorship laws were put in place. In response to mounting workers’ resistance, the Trinidadian Seditious Acts and Publications Ordinance (1920) ‘banned a number of publications and created the offence of “disaffection” against the King, the Government and the Executive … with penalties of up to two years imprisonment and/or a fine of up to £1,000.’ In effect, the law prohibited the distribution of printed material that the state considered subversive; thus, threatening freedom of thought, the press, and society at large. One of the main targets of this act was Marcus Garvey’s popular and subversive newspaper, Negro World. Published in New York, from 1917-1933, it reached far corners of the Black Atlantic, often distributed surreptitiously, by seamen and travelers. 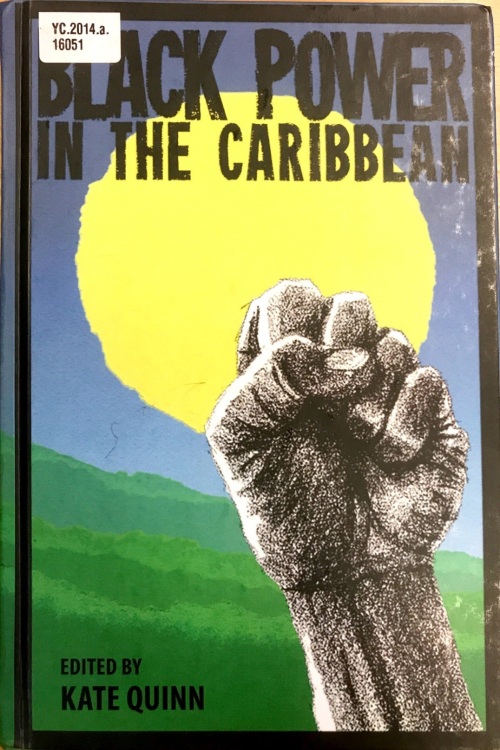 This culture of censorship was not just a hallmark of the colonial era, it persisted in newly-formed independent Caribbean nations. Speaking about the Jamaican government, Rupert Lewis – Black Power activist who was a student at Mona when the 1968 banning occurred – described the ‘banned list’ of books which the Jamaican government upheld in the Cold War context. It encompassed the ‘ban of all publications from Peking, Moscow, all Eastern European countries, Cuba,' as well as a ‘whole list of Black Panther newspapers, Malcolm X, and so on.’ Lewis who was a founding member of Abeng, a Black Power student newspaper which was established in the aftermath of the Rodney Affair, explains how ‘Abeng saw itself as providing space for the ideas that were being banned by the government.’ It was a powerful move in response to the government’s censorship of Black Power literature. 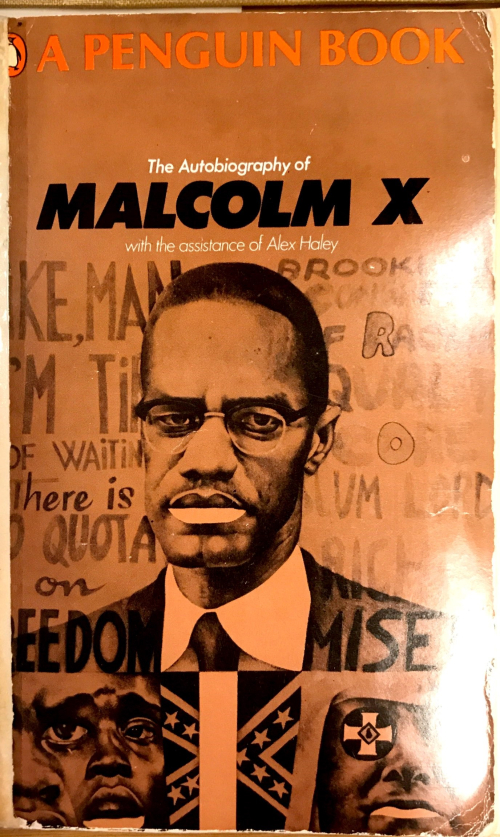 Malcolm X, The Autobiography of Malcolm X with the assistance of Alex Haley (Harmondsworth: Penguin Books by arrangement with Hutchinson, 1968)

Walter Rodney’s banning from Jamaica sparked an eruption of protests which travelled from the uptown Mona campus to downtown Kingston – it galvanised students, intellectuals, Rastafarians, the unemployed, and downtown ‘sufferers’ alike. Alongside this, the Daily Gleaner reported protests that were occurring across the region – at the Cave Hill (University of the West Indies) campus in Barbados, and in Georgetown, Guyana. In Kingston, the pro-government Daily Gleaner painted the uprising as ‘vandalism,’ with ‘hooligan gangs … looting, smashing, damaging, burning.’The article presented a politically-motivated distinct divide between ‘university students … faculty members’ and ‘gangs of men’ that were ‘anxious to take advantage of civil disorder [causing]…widespread destruction of property.’ 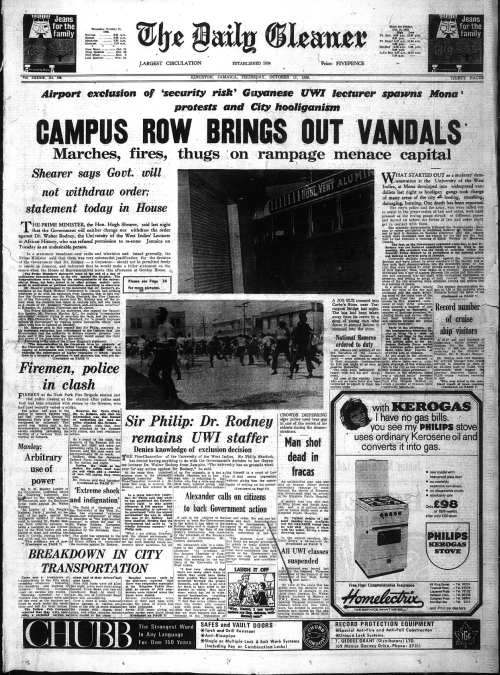 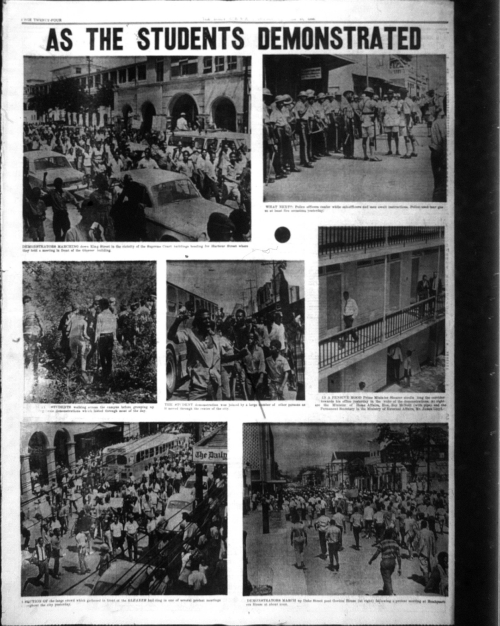 Walter Rodney’s trials and tribulations also reverberated in Britain. Protests were held outside the Jamaican Tourist Board in London, where Rodney’s comrades and friends, Richard Small, Jessica Huntley, Eric Huntley, Andrew Salkey, John La Rose, Selma James, and many others protested the banning. Out of these transatlantic political struggles and protests came a series of documents, written by Rodney, that were related to the work he had been doing in Jamaica. Rodney handed them to a group in London (many of whom had been present at the protest).Regrouping and discussing Rodney’s papers at 110 Windemere Road, Ealing – the home of Eric and Jessica Huntley – these documents came to be the basis of the seminal Black Power text The Groundings with My Brothers. 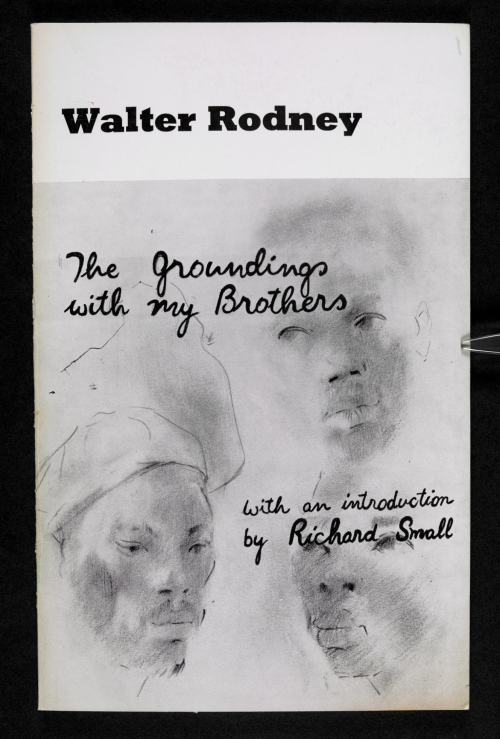 Formed out of the ‘groundings’ that Rodney gave in poor urban communities across Kingston, Groundings is a landmark text that critically explored the history and permeating effects of race, colonialism, and slavery on Caribbean society, passing comment on the continued struggles in the supposedly post-colonial Caribbean. Rodney called out the Government of Jamaica as serving the ‘interests of a foreign, white capitalist system’ whilst also upholding ‘a social structure which ensures that the black man resides at the bottom of the social ladder.’ Rodney was calling for anti-capitalist and global Black Power.

The publication of Rodney’s documents marked the birth of Bogle-L’Ouverture Publications. One of the first black publishers in Britain, Bogle-L’Ouverture would continue to publish and promote political, cultural, and literary texts, that were written by black and for black people. They also promoted black artists on book covers (Errol Lloyd did the artwork for Groundings), alongside selling greetings cards in their bookshop, which was renamed the Walter Rodney Bookshop in 1980, following his assassination. The publisher was founded on the premise of creating channels of dissemination for ideas and books that challenged the status quo and were hence marginalised, or censored, in the case of Walter Rodney.