'Anything But Petering Out' - celebrating Peter Nichols at Trafalgar Studios

by Zoë Wilcox, Curator of Contemporary Performance and Creative Archives

In tribute to Peter Nichols who sadly died in September, Trafalgar Studios is staging an afternoon of readings on 27 November to celebrate his theatrical legacy, generously supported by the British Library Collections Trust. Directed by his grandson, George Nichols, and starring Roger Allam and other special guests to be announced, the event will take a look at Peter Nichols’ vast literary contribution with excerpts from his much-loved television and stage plays including Promenade (1959), The National Health (1969), Forget-Me-Not-Lane (1971) and Poppy (1982), as well as passages from his personal diaries and rare unproduced plays from Nichols’ archive at the British Library. 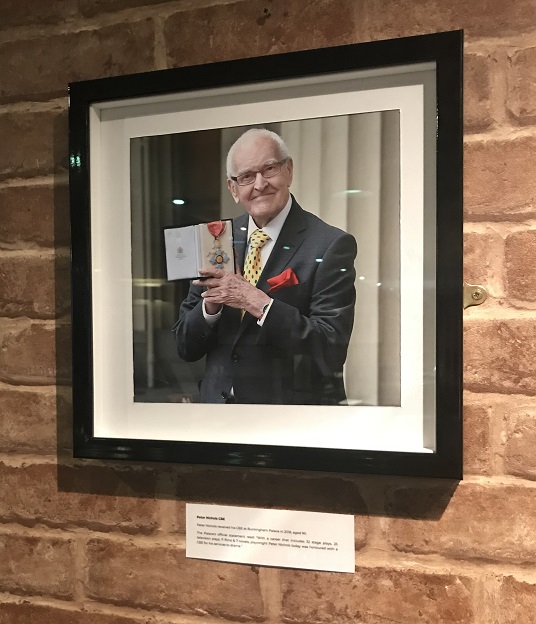 Also on show in the Trafalgar Studios’ bar is a display about the evolution of A Day in the Death of Joe Egg, Nichols’ most famous play which is currently being revived by the Trafalgar in a new production by Simon Evans. You can see reproductions from Peter Nichols’ archive in the Studio Bar, tracing the play’s difficult birth from initial doubts over the first draft, to wranglings with the Lord Chamberlain’s censors and its ultimate glowing reception at its premiere in 1967. 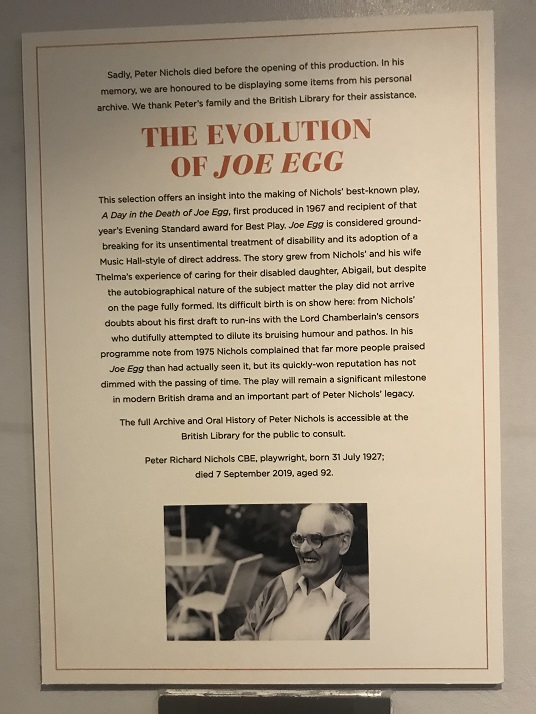 If that has whetted your appetite for further research, the wider archive is available to consult at the British Library. Acquired 20 years ago this month, the Peter Nichols Papers comprises 256 volumes of personal and professional papers from 1945 to the 2000s. You can listen to Peter Nichols reflecting on his career on BL Sounds, and various other interviews and theatre recordings are available to listen to onsite at the Library (search our Sound & Moving Image catalogue for details).

In light of Peter’s recent passing, it’s difficult not to read fresh significance into his words. In the programme for the current production of Joe Egg, Jamie Andrews from the British Library recalls one particular email exchange amongst many:

I see that at one point, feeling the physical challenges of ageing, his subject line was a typically self-deprecating ‘Petering Out’; but that a few emails later, it had changed to ‘Anything But Petering Out’…. A far more accurate assessment of his later years.

Just as Peter’s words will live on in all who knew him, his work survives in the archive he left behind and the potential it holds for many more revivals to come.

Peter Nichols: A Celebration will take place next Wednesday 27 November at 3pm. Tickets are available from ATG Tickets.

Posted by Eleanor Dickens at 4:40 PM