a guest blog by Milena Borden, who has been engaged with the Evelyn Waugh Society, the University of Leicester and the British Library in research for the Complete Works of Evelyn Waugh. and has published on the topic ‘Evelyn Waugh and the Second World War’. She completed her PhD at UCL and is interested in perspectives of intersections between history and fiction. These papers, and many more by Evelyn Waugh, are available to consult, for free, in our Reading Rooms. 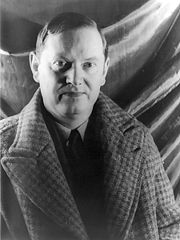 Evelyn Waugh, photographed in about 1940

HOW WONDERFUL WE ARE GOING TO SEE YOU TODAY YOU

KEPT ME AWAKE NEARLY ALL NIGHT LAUGHING AND

Vivien Leigh (famous for playing Scarlett O’Hara in Gone with the Wind, 1939) sent this telegram a few hours before the Foyle’s Literary Luncheon dedicated to Evelyn Waugh’s novella, The Ordeal of Gilbert Pinfold (1957). [1] It is preserved in a collection of three related items at the British Library, and offers a glimpse into the celebrity milieu which both sender and receiver inhabited at the time (although Leigh’s husband, Sir Lawrence Olivier, who was implied in the 'we' of Leigh's telegram didn't turn up to the party, in the end). Despite its short length, this SMS-like burst of twenty-five words is packed with energy. One can almost see Leigh dictating it enthusiastically to the Sloane Square Post Office -- no-punctuation; cigarette in hand.

But what information can we glean from these papers about their friendship and the book? Leigh cabled that she had spent the night before reading and laughing and crying. Inevitably one wonders what did she, who suffered from a bipolar disorder from around the age of 25, find funny or not so funny in The Ordeal of Gilbert Pinfold - a semi-biographical account of a deeply disturbed human being based on Waugh’s own experience with psychosis.

Gilbert is a carefully constructed character underpinned by a single and powerful belief, which is also a hallucination, that he is persecuted; because he is a German and a Jew; a Roman Catholic and a fascist; a communist homosexual and a suicidal drunk. Gilbert is more or less the same as Waugh. His hallucinatory conversations with imaginary enemies are full of distinctly autobiographical features.  Like Waugh, Gilbert is somebody who “abhorred plastics, Picasso, sunbathing and jazz”, a member of the S.O.E. during the Second World War and a fake aristocrat who allegedly sympathized with Hitler, Mussolini and Franco.

Medically inclined readers of The Ordeal of Gilbert Pinfold often find Waugh’s self-parodying style unconvincing as a description of a clinical psychosis or delusion, although they recognize that there might be an element of alcohol induced hallucinatory experience in it. Alexandra Pitman argues that the novel illustrates “the difficulty in distinguishing alcoholic hallucinations from psychotic illness” but proves that in the case of the former if one stopped drinking the problem would resolve quickly, as in the case of Gilbert.[2]

Maybe Leigh could laugh and cry with laughter at the fictionalized telescopic look Waugh took towards his own character because it had very little in common with her own highly volatile life, which behind the scenes was dominated by  battles with mental illness. Ten days after the Foyle’s event Leigh discovered that Olivier was having a affair and slashed him across the eyes with a wet face cloth while hitting her head on a marble bedside table.[3]Her depressive and aggressive drinking habit drove her professionalism but also aggravated her illness and eventually killed her at the age of 53. She would die ten years later, a victim of her illness, at her flat at 54 Eaton Square, the very same place from which she'd sent the breezy telegraph to Waugh. What the actress Maxine Audley said about Leigh could probably be said about Waugh too: “When she was good, she was very good, but when she was bad, she was awful!” [4]

Also included in the collection is an earlier Leigh letter addressed to Waugh, dated 21 February 1955. This letter spreads over three square pages of blue letter-headed paper of enlarged handwriting, and thanks Waugh for his Spectator review of Peter Brook’s Titus Andronicus (1955). [5] “I am quite unaccustomed to such very pleasant laudatory language”, Leigh writes. She also asked Waugh if he would be going to see Macbeth, a production directed by Glen Byam Shaw in the same year in which she played Lavinia, offering to book seats and inviting him to dinner with her and Olivier afterwards.

The third item is a handwritten telegram dated 21 February 1957 addressed to Combe Florey House: “Hurray we are so delighted for you Vivien and Larry”. This is catalogued as being sent by Olivier and presumably congratulated the Waughs for the move to their new home in late 1956.

In the end, these telegrams -- constrained as they are by form and function -- can only gesture towards the deeper friendships between those that wrote them. Nevertheless, if we're willing to look at them more closely, certain currents become more visible; of shared troubles and triumphs; laughter and tears.

Posted by Eleanor Dickens at 1:41 PM