By Laura Walker, Lead Curator of Modern Archives and Manuscripts 1851-1950. ‘Exploring Eliot’s Coventry’ is a free exhibition now open at The Herbert Art Gallery and Museum, Coventry. The Sir John Ritblat Treasures Gallery is a free exhibition space at the British Library, which will feature a one case display on George Eliot opening on 5 November 2019.

On 22 November 2019 one of the most renowned Victorian novelists celebrates her 200th birthday. She was born Mary Anne Evans near Nuneaton, Warwickshire and is now more commonly known under her pseudonym George Eliot. Eliot is best known for her novels, including Mill on the Floss (1860), Silas Marner (1861) and Middlemarch (1871-1872) which remain as popular as ever. 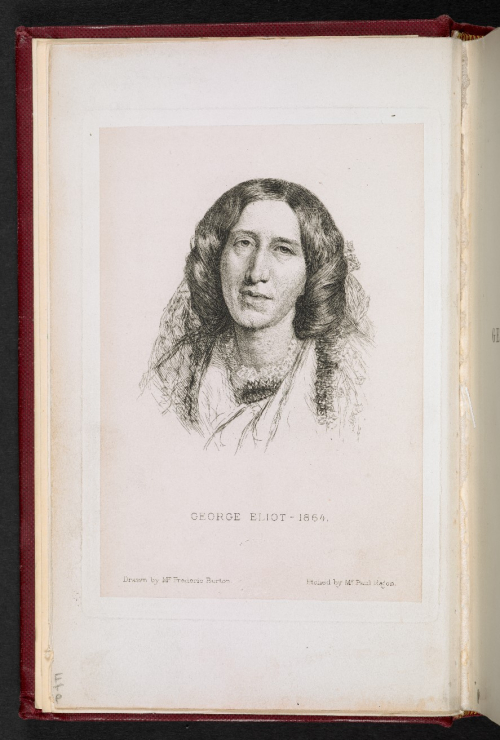 To celebrate Eliot’s bicentenary two volumes of Middlemarch will be on display from November 2019 until January 2020, one volume at the British Library in London and the other at The Herbert Art Gallery and Museum in Coventry.

Middlemarch, took Eliot four years to complete and is subtitled ‘A Study of Provincial Life’. The story follows the lives of the inhabitants of a small Midlands town in the early 1830s. It is thought that Eliot’s time living in Coventry inspired aspects of the fictional town and its characters. Marital relations form a key part of the narrative of the novel, which adhered to the idea of realism and the importance of the ‘ordinary’. Central to the novel are two relationships, one between the intelligent and idealistic heroine Dorothea Brooke and the insecure and ineffectual scholar Mr Casaubon. The other is between the talented and naive doctor, Tertius Lydgate and the spoiled and wilful Rosamond Vincy.

Middlemarch was published in eight ‘half volumes’ over 12 months, starting in December 1871. The final manuscript of the novel, which was sent to the printers was initially given by George Eliot to her partner George Henry Lewes along with manuscript copies of nine of her other works including Mill on the Floss, Silas Marner and Daniel Deronda. After Lewes’s death Eliot bequeathed the ten manuscripts to the Department of Manuscripts, which at that time was part of the British Museum. The manuscripts now form part of the British Library’s collections (Add MS 34034-34037).

The original loose leaves of Middlemarch are now bound into four volumes. The second volume of which is currently on display at the Herbert from Friday, 1 November until Sunday, 5 January 2020, when it will move to Nuneaton Museum to be displayed for a further eight weeks. The loan of Middlemarch forms part of the British Library’s Treasures on Tour programme, working with partners across the UK to share its collection of over 170 million treasures, inspiring the next great idea or moment of joyful discovery. The programme is generously supported by the Helen Hamlyn Trust. The British Library will be announcing additional loans as part of this programme in early 2020. To highlight the famous author’s connection to Coventry, the Herbert will be exhibiting this work alongside other artefacts in a new display, ‘Exploring Eliot’s Coventry’.  The opening of Middlemarch on display features prominent manufacturer and mayor of Middlemarch, Walter Vincy and his daughter Rosamond. Walter Vincy expresses concern that his daughter wishes to ‘marry a poor man’.

"Nonsense, my dear!" said Mr. Vincy. "What has he got to marry on? You'd much better give up the engagement. I've told you so pretty plainly before this. What have you had such an education for, if you are to go and marry a poor man? It's a cruel thing for a father to see."

Vincy goes on to reveal that he won’t give any money to Rosamond’s potential husband.

"I hope he knows I shan't give anything—with this disappointment about Fred, and Parliament going to be dissolved, and machine-breaking everywhere, and an election coming on—"

This extract is one of the few in the novel that mention national events beyond the town of Middlemarch and places the story in the context of the 1830s. It is thought that Vincy may have been based on Eliot’s Coventry neighbour, Abijah Pears, who was mayor of Coventry in 1842 and a ribbon manufacturer. 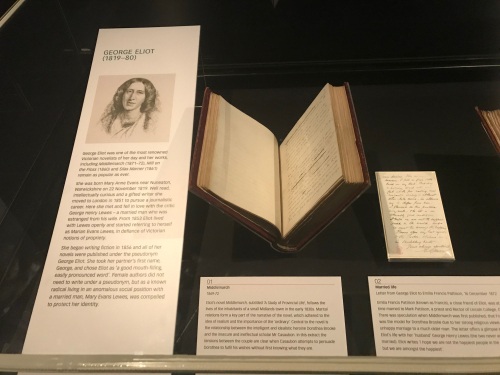 Complicated marital relations feature heavily in Middlemarch and the manuscript on display at the British Library will be open at a disagreement between the other key couple in the story. In this extract Casaubon attempts to persuade Dorothea to fulfil his wishes without first knowing what they are.

"No, I do not yet refuse," said Dorothea, in a clear voice, the need of freedom asserting itself within her; "but it is too solemn—I think it is not right—to make a promise when I am ignorant what it will bind me to. Whatever affection prompted I would do without promising."

Dorothea assumes that her husband is asking her to promise to complete his life’s work, Key to all Mythologies; a hopelessly wide-ranging work which first draws her to Casaubon, but which she comes to doubt as it progresses. This work forms part of her husband’s wishes but he also writes into his will that she will not inherit his fortune and property if she marries his cousin the artist and radical Will Ladislaw. Casaubon, however, dies before Dorothea can make the promise and it is only after his death that the codicil attempting to prevent her marriage to Will becomes known.

The third volume of Middlemarch will feature in a one case display in the Sir John Ritblat Treasures Gallery, which opens on Tuesday 5 November 2019 and runs until Sunday 26 January 2020. The display will also feature amongst other items one volume of Mill on the Floss and letters by George Eliot.