Lucy Carolan is currently in the third year of a practice-based fine art PhD at Newcastle University, funded by Northern Bridge Doctoral Training Partnership. In her research she is using photography, text and moving image to create work that draws on the inspiring experiences of people living with dementia, and her recent research placement at the British Library was entitled 'Art, Poetry and Memory: Contemporary UK Artists’ Books'. See more of Lucy's work here.

At the beginning of January this year I completed a short PhD placement in the British Library’s department of Contemporary British Publications, which involved researching artists’ books towards a potential future project on the theme of memory. During the three months I spent at the Library I consulted over 300 artists’ books, ranging from late nineteenth century works, like ‘Le Corbeau’ (C.70.i.1), the 1871 Stéphane Mallarmé/Édouard Manet response to Edgar Allen Poe’s ‘The Raven’, to contemporary works such as Jana Traboulsi’s 2013 ‘Sorry for not attending’ (ORB.30/8742), and from tiny concertina books the size of 35mm film strips, to a suite of screen-prints so large, at 93x73cm, it took a while for Reading Room staff to figure out how to manoeuvre it through the door and over the Issue Desk. Even the artists’ books which didn’t fit the research brief captured my interest, but one in particular left a very strong impression.

Stirrings Still (C.193.c.25) contains the last prose piece, of that title, written by Samuel Beckett and designed and illustrated by artist Louis le Broquey for publication in late 1988, roughly a year before Beckett’s death. As an object, Stirrings Still is not as spectacular or unusual as many of the other artists’ books in the Library’s collections, and although it is evidently beautifully crafted, its form is very familiar. Nevertheless, it continues to affect me. Initially I was struck by the subtlety of its unusual page layout; the way the text splits across pages in blocks in order to fragment the narrative and the way le Broquey’s abstract imagery punctuates Beckett’s prose. Its design drew me in, but it was the book in its entirety -- as aesthetic object and as an artistic vehicle for the literary text – that worked to unsettle what I’d thought was a comfortable familiarity with Beckett’s work. I suspect that I may not have discovered this text if I’d come across it otherwise, such as in the paperback version of his complete short prose that I bought afterwards. By comparison with the standard edition, Beckett and le Broquey’s Stirrings Still, although modestly designed in the context of other artists’ books, clearly demonstrates the power of the medium. 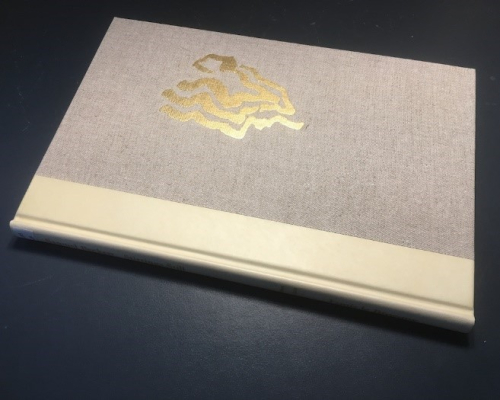 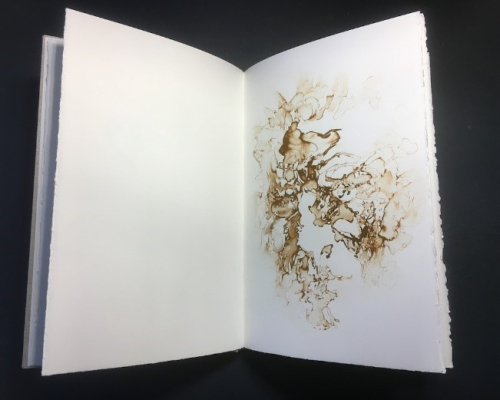 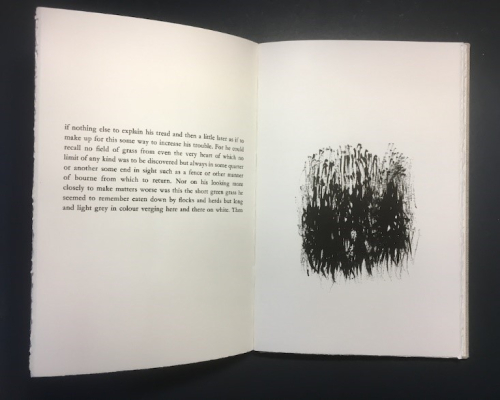 Photographs illustrating the modest design of  le Broquey and Beckett's work and the placement
of abstract images alongside the text C.193.c.25

Timing is a factor to consider. My receptivity to the book can partly be explained by my own research project, which concerns finding ways to express -- through image and text -- aspects of the lived experience of dementia. Stirrings Still is remarkably consistent with these experiences. The narrative is centred in a lone character who seems to exist in a state of spatial and temporal confusion: he experiences hallucinations, short-term memory loss, compulsive repetition, disorientation, and a pervading sense of non-continuous identity, or having lost previously held capacities, which he meets with an unmet desire for concentration. Beckett writes:

One night or day then as he sat at his table head on hands he saw himself rise and go. First rise and stand clinging to the table. Then sit again.     Then rise again and stand clinging to the table again. Then go. Start to go. On unseen feet start to go. So slow that only change of pace to show he     went. As when he disappeared only to reappear later at another place. Then disappeared again only to reappear again later at another place     again...

The spiralling structure of this text is disorienting for the reader, too. It seemed to me to also have an aphasic quality. Further research lead to the discovery of the next and final piece of Beckett’s writing; a poem called ‘Comment Dire?’ (Shelfmark Cup.21.g.27(11), translated into English as ‘What is the Word?’), written contemporaneously with Stirrings Still and following a presumed stroke earlier that year which left him temporarily aphasic. The loss of ability to access language – to remember or recognise words -- was something that interested Beckett throughout much of his career.[1] And in an interview with Lawrence Shainberg in 1980,[2] when he was 74 years old, he was recorded as saying:

...with old age, the more possibilities diminish, the better chance you have. With diminished concentration, loss of memory, obscured intelligence – what you, I suspect, would call brain damage – the more chance there is for saying something closer to what one really is. 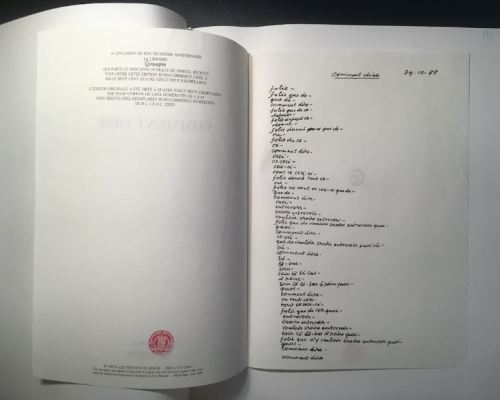 Beckett is one of those authors who people tend to think they ‘know’, by reputation, through reviews, or having read/seen/heard some of his works, however partially. My encounter with Stirrings Still at the British Library has led to the realisation that even the most straightforward-looking artists’ books can take things, like the text of an author with whom I thought I was familiar, and inspire a radical reassessment and refreshed appreciation of their work.