a guest blog by Timothy Hawley, Ph.D, a retired psychologist who, for forty years, was the proprietor of the Contre Coup Press, an avocational private press located in Louisville, Kentucky, U.S.A.

In today’s social network-obsessed world, the idea that a fascinating group of novelists, poets, dramatists, artists, actors and others could fly underneath the radar seems inconceivable. But in 1920s London, the situation was very different; public opinion and attention were directed and shaped by journalists and other powerful interests. Thus, the Bright Young People (aka Bright Young Things) — a group of well-connected, affluent young people whose exploits were breathlessly reported in the press and by one writer in particular, Evelyn Waugh — were, despite the attention they garnered, far from being the only game in town. Another group – less well-connected, less affluent, a bit older and a bit less flamboyant – were living parallel lives. This group called itself The Launderers, supposedly because they were committed to washing each other’s clean laundry in public, an apparent reference to their desire to promote, rather than denigrate, each other.

The group’s activities were recorded by Joanna Elder Giles, a young Australian woman and a member of a wealthy and influential family in her native country (the library at the University of Adelaide, for instance, is named after her grandfather). As a budding writer, Elder Giles wrote two books of poetry before coming to London in the early 1920s. She became acquainted with The Launderers through a friend, and quickly met one of the group’s members; her soon-to-be writing partner, Brian Hill, with whom she wrote mystery novels under the pseudonym of Marcus Magill. Joanna, who was known as “Jay,” began writing what she called The Laundry Book at the very beginning of her involvement with the Launderers, in the late fall of 1924, and continued writing this journal of the group’s activities until October 1, 1930, at which point the journal abruptly ends mid-sentence.  The group was centered around the theatre district in London’s West End, and they wrote and performed plays in small theatres and other private venues, most commonly in a restaurant called The Cutty Sark, which was a favored hangout of the Launderers. They wrote and produced a play at Elsa Lanchester’s famous The Cave of Harmony club, known for its bohemian and avant-garde entertainments, which almost proved to be disastrous, despite the fact that The Cave of Harmony was ostensibly a “private club” which generally made it immune from morals prosecutions (more about this incident later).

But they also partied – oh, how they partied. And their parties pulled in many others who might have been considered to be special guests of the Launderers, but who were not in attendance often enough to be considered to be in the inner circle. When only the “members” (notwithstanding the fact that there was no formal membership) were in attendance at a get-together, they called it a “Laundry.” They often held these “Laundries” at the home of Gilbert Beith, known as Hollywood, in Gomshall. The people who would have considered themselves to be “members” would include (in alphabetical order):

Buena Bent, an actress who appeared on stage and in film during the 20s and 30s.

Laura Pendred, author and dramatist, writing under the pseudonym of Laura Wildig.

Many, many others flit through the pages of The Laundry Book, some famous, some infamous, some little known. These include Meum Stewart, an actress who nearly caused catastrophe for Brian Hill (more on that later); Alick Schepeler, artists’ model and mistress of Augustus Johns; Joe Carstairs, at the time running an all-female taxicab company, and many others.

But perhaps the most remarkable person in the book is Antonia Earnshaw-Smith. Several of the Launderers first met her and her husband, Eric, while taking a holiday at Cassis sur Mer. She was brilliant, witty, bawdy and very flirtatious – a perfect fit for the Launderers. Upon returning to London, she became a regular with the group, and bailed out Brian Hill when he was about to be investigated for homosexual writings for a play at The Cave of Harmony (co-written by her).

Meum Stewart, who was to appear in the play, inadvertently left a copy of the script in a taxicab. The cab-driver read the script, finding it highly offensive, and turned it over to Scotland Yard, where it was assigned for investigation to Detective Inspector Jesse W. Keech, one of the top detectives in the organization. But Tony (as Antonia Earnshaw-Smith was called) went and met with Keech and somehow persuaded him to drop the investigation, much to the relief of the Launderers, who feted her with poems implying that she must have done something naughty with the famous detective to get him to call off the dogs.

Later, Jay became jealous of Tony’s relationship with Brian Hill, and Jay and Brian played a practical joke on Tony that backfired. Years later, Tony wrote out a list of men that she had had affairs with, and Brian’s name was on the list. However, it is highly unlikely that this “affair” was sexual. Tony’s first two husbands were gay, and she joked that she was the only woman who had been married twice and was still a virgin. Tony – and Jay as well – was a woman who was very attracted to gay men (Brian was gay, his partner being George Harvey), but only in an intense intellectual way. She was drawn to Brian’s wit, his intelligence, his interests and talents. Jay was also attracted to gay men, and may herself have been a lesbian, although that is purely conjecture.

But being a gay man in 1920s London was a very dangerous situation. Being “outed” in those days was likely to destroy a person’s life. Oddly enough, lesbians were in no danger from the law, supposedly due to Queen Victoria’s naïveté about the mechanics of sexual congress between women. So while many of the people in the Laundry book are gay or lesbian, this fact is only alluded to in regard to the women, since Jay was far too loyal and discreet to write anything down that might endanger her gay friends.

Many other events, large and small, are recounted in The Laundry Book, but the writing came to an end in 1930. It may be that the members were slowly drifting apart. Another possibility is that Jay’s interest in aviation drew her away from the group. She was issued a Pilot’s Certificate in July, 1930, and was one of only 40 women in England who owned their own planes.

The original manuscript of The Laundry Book is in the possession of The Ekstrom Library at the University of Louisville in the U.S.A. It is a remarkable object, made up of large typed sheets folded and sewn into signatures with yarn or string. It includes a large number of tipped-in items, including photographs, poems, clippings and much miscellaneous material, and is enclosed in a cloth clamshell box.

The copy now in the possession of The British Library reprints the entirety of the approximately 80,000 word manuscript and includes over 200 tipped-in items. However, it is not a type-facsimile. Rather, it a typographic interpretation, based on the printer’s whim (or whimsy). The book was printed in a limited edition of only 29 copies, with a 96-page companion volume providing context, explanation and additional information. It was entirely hand-set in metal type and printed on a hand-operated cylinder proof press. 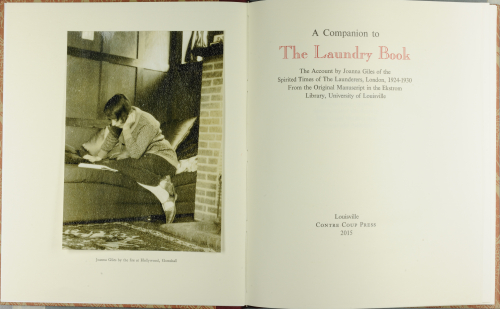 Photographs of the Laundry Book and its Companion, now in the Library's possession.