The British Library’s collections of material relating to Harold Pinter continue to grow. Just released into the Manuscripts Reading Room are two small but significant acquisitions, one from Susan Engel, who acted in the first production of The Room (15-16 May, 1957), and another from the Estate of Guy Vaesen, who was Assistant Director to Pinter for the double-bill The Lover and The Dwarfs produced by Michael Codron at the New Arts Theatre in 1963. The third and more extensive deposit also now open to researchers is the archive of Joe Brearley, Pinter’s teacher and mentor at Hackney Downs School.

Susan Engel was a drama student at the University of Bristol when she took the role of Rose Hudd in Pinter’s first play, The Room. The play was produced and directed by Henry Woolf, one of Pinter’s close circle of Hackney Downs friends, who was at the time a postgraduate student in the Drama Department. As well as directing, Woolf also played Mr. Kidd. Woolf’s passion for the theatre, like Pinter’s, was strongly inspired by Brearley’s enthusiasm for poetry and drama. Engel has provided her programme for the play, seven original photographs of the production and her typescript copy of the play. Rose’s part is underlined throughout, and Engel’s occasional annotations show something of Woolf’s direction. 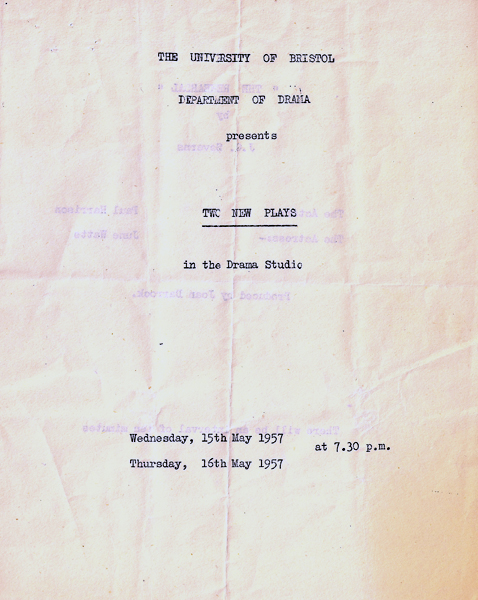 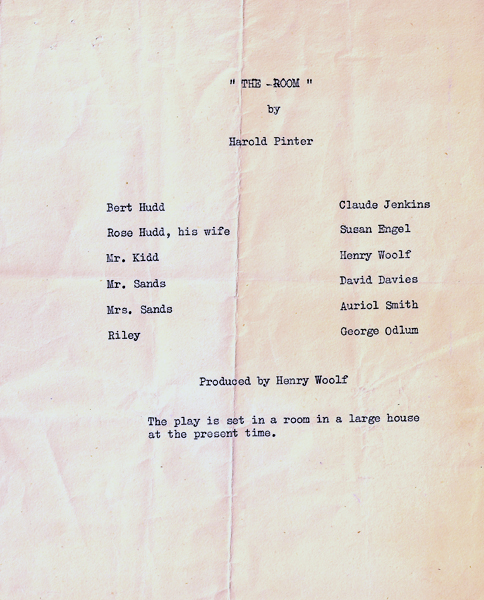 Programme front cover and inside page showing the cast for The Room, University of Bristol, 15-16 May, 1957.

Michael Billington’s biography of Pinter tells how, one evening in July 1957, Engel was instrumental in bringing together Pinter and his future theatrical agent, Jimmy Wax. Engel’s papers include a letter and a card from Pinter that show he kept her informed. Following Harold Hobson’s influential review of The Room (when it was revived at the National Student Drama Festival, again at Bristol, in December 1957), Pinter wrote to Engel (January 1958) that The Birthday Party, ‘my 3-acter is expected to go on at the Lyric Hammersmith. Quite a thing. Thank God you were Rose’. Although the play flopped badly on its first run, Pinter remained resolute: ‘a cheer for Hobson. I ain’t finished yet!’ (postcard to Engel, 4 June 1958).

Guy Vaesen kept a fascinating theatre journal in which he recorded, over eighty-eight closely-written notebook pages, the 1963 Pinter-led rehearsals for The Lover and The Dwarfs. Pinter and Vivien Merchant, who played ‘Sarah’ in The Lover, had previously acted together in several of Vaesen’s productions in repertory. At Bournemouth, in the summer of 1956, Merchant played Jane Eyre to Pinter’s Rochester; at the end of the season, they married. Vaesen’s journal is therefore not only illuminating about Pinter’s approach to stage direction but is enriched by personal observation and it displays particular insights that only close association brings. Of the two plays, it was The Dwarfs that proved the more challenging in rehearsal. Pinter’s response to the actors’ difficulties with some of his lines was that they should simply follow the rhythm of the words: ‘In short,’ Vaesen reports Pinter as saying, ‘if you hit a line with particular emphasis (within the rhythm) the line will become clear. Listen to the sound first – and the meaning will clear through this […]. Music and rhythm. They must be your guides.’ Here, Pinter’s approach to performance exhibits a poet’s confidence in the cadence of his words. 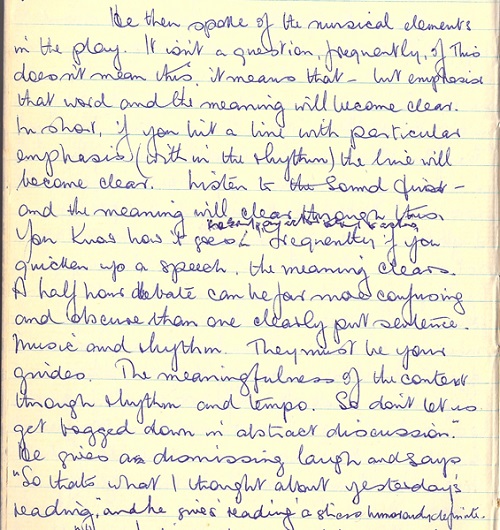 Vaesen’s papers include thirty-two letters and cards from Pinter, beginning in 1963 with a letter confirming that he is to work with Pinter in directing the double bill: ‘Codron is completely happy about the idea! So am I, as you know.’ In typical Pinter style, the letters tend to be brief and direct. They continue until 1995, when we find Pinter ‘off today to Chichester where I’m directing Harwood’s new play.’ Lifelong friends, Pinter kept Vaesen abreast of his writing and directing projects for stage and screen. In later life, Vaesen enjoyed considerable success as an artist. Pinter bought his cricket scenes. In 1980, he wrote to say that he has a Vaesen ‘in almost every room in both houses now’.

Pinter’s acceptance speech for the Cohen Literature Prize (1995) included a warm tribute to his ‘inspirational’ teacher at Hackney Downs, Joe Brearley, who ‘possessed a passionate enthusiasm for English poetry’, especially the dramatic poetry of Shakespeare and John Webster. Pinter said that Webster’s words made him feel ‘dizzy’. Henry Woolf has recalled the vivid impression that Webster made on ‘the Hackney gang’ when Brearley took some of his pupils to see The White Devil. In his Cohen speech, Pinter remembered long walks with Brearley when they would ‘declare into the wind, at the passing trolley-buses or indeed to the passers-by, nuggets of Webster’. Betrayal, cruelty, moral corruption, and torture – mainstays of dark Jacobean theatre – were to be repeatedly re-inscribed in Pinter’s plays. The memorial poem he wrote for Brearley, who died 19 November 1977, evokes these excited walks and talks of his youth, perambulations so indelible that it seemed to Pinter he was, in some ever-necessary way, undertaking them still: ‘You’re gone, I’m at your side, / Walking with you from Clapton Pond to Finsbury Park, / And on, and on.’ When Mr. Kidd in The Room says ‘So I thought to myself, I’d better have a look at those pipes’, one can imagine an inward chuckle as Woolf performed, reminded as he surely must have been of Webster’s visceral line, cited by Pinter in his Cohen speech: ‘There’s a plumber laying pipes in my guts’.

Joe Brearley retired from Hackney Downs School in 1971, at the age of 62. He spent the next six years of his life – all that was to remain to him – in Germany. A German speaker, and a teacher of German as well as English, Brearley had spent his summers in the 1930s in Germany as a private English tutor, where he witnessed at first hand the rise of the National Socialist Party. In 1933, he heard Hitler speak at a rally at Rüdesheim on the Rhine. After the War, he returned to teach at Hackney Downs School, where fifty per cent of the pupils, including Pinter, were from Jewish families. Although Brearley’s final years in Germany were few, they were nevertheless eventful. At the Gymnasium where he taught English (his retirement did not bring an end to the impulse to teach), Brearley met the artist and teacher Mara Loytved-Hardegg, thirty-three years his junior, with whom he was to share his last years (and who has now donated Brearley’s papers to the British Library). They lived in Nuremburg. To an out-going yet conservative former Deputy Head, Mara’s circle of young friends – avant-garde artists, teachers, film-makers, and Marxists – were a rich source of intellectual stimulation (although, as the papers show, he drew the line at Marxism and at smoking cannabis). 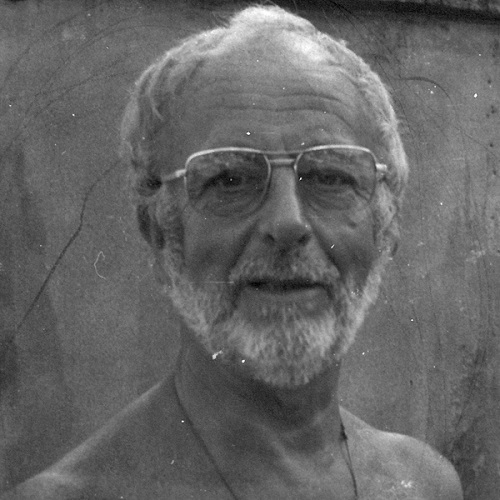 Brearley’s archive is weighted towards these final and personally-fulfilling years: there are extensive files of correspondence and two journals that record, in poetry, photographs and watercolours, holidays with Mara in Greece and Ireland. But the collection also includes some earlier Hackney Downs material. There are printed programmes for the school plays that Brearley produced, and school exercise books that record the staging and lighting schemes for the two plays by Shakespeare in which Pinter acted, as Macbeth and as Romeo. Brearley did not act in his production of Macbeth, but in Romeo and Juliet he played Prince Escalus. 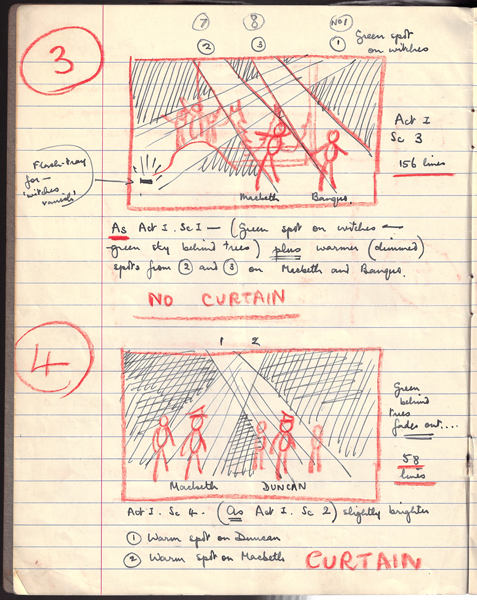 A page from Joe Brearley’s lighting scheme for his school production of Macbeth (1947).

In September 1977, only weeks before his death in November, Brearley returned to England to meet up with a longstanding American friend and his wife. Much to Brearley’s frustration, they are determined to visit – whistle-stop fashion, guide-book in hand – every cathedral city in southern England. Along the way, however, Brearley manages to augment the repetitive schedule. They visit Henry Woolf, ‘an old (actor) pupil of mine’ then living in Folkestone. Two days later, they detour to Brighton where Brearley is reacquainted with Pinter’s parents (in 1948, Brearley had interceded on Pinter’s behalf when, much to the dismay of his parents, he decided to register as a conscientious objector). At the end of the exhausting itinerary, on Friday 30 September, Brearley lunches with Pinter, at ‘The Little Acropolis’ in Charlotte Street. Inevitably, much of their conversation touches upon Pinter’s changed personal circumstances, sensationally reported at the time in the newspapers: the end of his marriage to Vivien Merchant and his new life with Antonia Fraser. When Brearley and Pinter met for the last time, they were both were embarking on new futures.

Pinter is a presence throughout the archive, which includes his correspondence with both Brearley and Loytved-Hardegg, continuing solicitously until his death in 2008. But there is a second consistent presence who must be mentioned. On the same tour of southern England, Brearley slipped away to make one further personal call. Passing through Cambridge, he called upon his old tutor, F. R. Leavis, whose health was then rapidly declining. Queenie Leavis greeted him: ‘It’s good to see his really old students from the great days … one has to be so careful now. I have to keep away people who come out of mere curiosity … and journalists out for a story.’ Brearley read for the English Tripos at Cambridge under Leavis’s supervision. In an autograph testimonial in the archive, Leavis wrote (14 March 1932): ‘[Brearley] has in particular studied critical method, especially as it bears upon the problem of teaching English. He is a cultivated man with a trained mind, & is himself well qualified to teach. I recommend him with great confidence.’ Among the many letters of condolence Mara received was one from Q. D. Leavis, who admitted to having initially hesitated in agreeing to Brearley’s visit, ‘Dr Leavis so changed and not able to converse’. She paints a poignant picture of their last meeting: ‘I shall never forget how kind and sympathetic [Joe] was to my husband, sitting by his bed & holding his hand’.

Leavis outlived Brearley by five months. His persistent presence in the archive – which extends even to a final brief entry (2 November 1977) in Brearley’s last journal, written from his hospital bed – serves as a reminder that Brearley’s enduring influence upon the young Pinter in the late 1940s, including the ‘revelation’, as Pinter described it, of Webster’s plays, had a particular critical and pedagogical setting. It also supplies a context to Pinter’s advice to the actors rehearsing The Dwarfs, that their guide should be the music and rhythm, the movement – to borrow a favoured term from Leavis – of his words. If Brearley’s teacher was not far from his thoughts in hospital, nor was his pupil. The first note in the same hospital journal (15 October) registers a dream of a dream, a dream of Pinter acting in a ‘school production’ of Midsummer Night’s Dream.

Posted by Eleanor Dickens at 2:43 PM