Broad technological change is often experienced as a distortion or shift in our lived experience of communication with one another. In this way, as in so many others, the twenty-first century mirrors and repeats what was rehearsed in the eighteenth-century. As Dr. Lucy Curran writes in the article linked above — cementing the relation between technology, speed and infrastructure: “the 18th century is commonly known as the great age of letter writing: postal routes rapidly expanded, and the epistolary novel emerged as a hugely popular genre”. As communication at a distance became more viable and wide-spread, so did novel forms of self-expression and self-construction, or, as Curran writes, ‘just as social media streams today allow modern celebrities to present versions of their intimate lives for public consumption, so early modern and 18th-century figures carefully constructed themselves in their letters for particular audiences keen to read these kinds of works”. 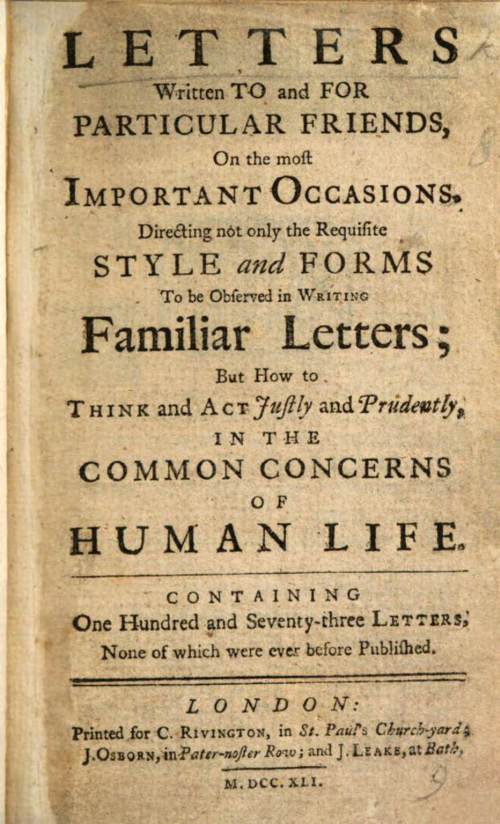 The frontispiece of Samuel Richardson's Letters Written to and for Particular Friends, a letter-writing manual, which inspired perhaps the most famous epistolary novel, his Pamela (1740)

This knotty relationship in the epistolary novel between the secluded self and the social self, between private relationships and their performance, and between sociality — as mediated by rapid technological change — and isolation, has much to tell us about our current moment. Like it or not, the selves we construct through social media, instant messaging and video conferencing software are collected and stored somewhere (if even just in the minds of others) and they exist -- to a large extent -- outside of us. Reflecting on how others navigated these choppy waters in the past can teach us a lot about what it means to be performing, constructing, confiding and loving in a time of enforced social distancing. If you're curious, Dr. Lucy Curran's article for Discovering Literature: Restoration & 18th century is a great place to start.