Postcards for our times 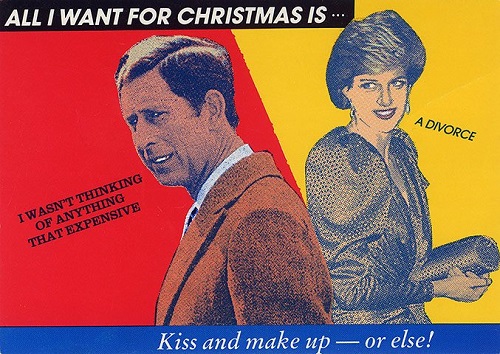 Postcard from the archive of Angela Carter Archive, Add MS 88899/3/4-24. © Courtesy of Susannah Clapp. Except as otherwise permitted by your national copyright laws this material may not be copied or distributed further.

When was the last time you sent a friend a postcard? Perhaps now’s the time. Yes, you could Whatsapp or videocall or email, but who doesn’t love post? Even if receiving it in this day and age does throw up multiple questions. Should I wash my hands after touching it? Did the postwoman wear gloves? My dad even took to quarantining the daily newspaper for a while until the absurdity of reading 24 hour-old ‘news’ got the better of him. Still, once you’ve got past the hurdle of welcoming an item from the outside world into your home, there is all the joy of the postcard to appreciate. A written message and a visual element to admire, and perhaps some witty interplay between the two, depending on the acuity of the sender.

As we continue our blog series on Digital Literary Collections and following on from Callum’s post on the epistolary novel, I’d like to draw attention to the humble postcard. Sometimes overlooked within the correspondence section of a literary archive, many of our contemporary literary archives contain substantial numbers of postcards and greetings cards. Unlike the heavyweight genre that is the literary letter, they may not be as painstakingly performative and endlessly quotable as their paper counterparts. But these cardboard cousins offer us a more intimate and arguably less self-conscious view of literary friendships. And the images chosen by the senders can themselves offer insights into the workings of a writer’s imagination.

In Susannah Clapp’s article Angela Carter in Postcards on our Discovering Literature: 20th Century website, she recalls her friendship with Carter as played out in postcards ‘dashed off throughout the 1980s from Australia, the States, Europe, London’:

These cards told more than one story. The cartoons, paintings and photographs Angela chose sometimes contradicted, at other times re-emphasised her words on the other side. Some of the images glance at a conversation we had been having, or at an episode in Angela’s life. Sometimes, of course, the picture hints at nothing. Soon it will be harder to uncover the hidden history here, to know what is random and what is allusive.

The images which Carter sent to Clapp reveal her preoccupation with Shakespeare in the early stages of work on Wise Children, as well as her delight in lampooning authority figures, and her aesthetic tastes (there’s something particularly Carteresque about the red splatter of Mount Etna exploding in a card sent to Clapp in 1987). For further commentary see Susannah Clapp's article Angela Carter in Postcards, or her beautiful little book, A Card From Angela Carter. 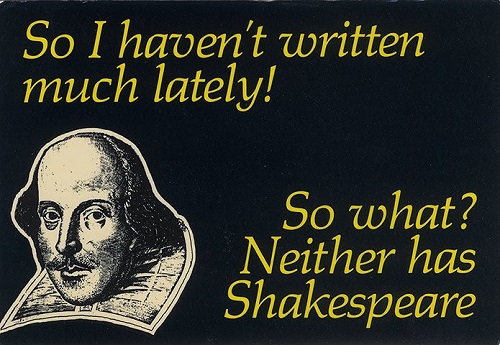 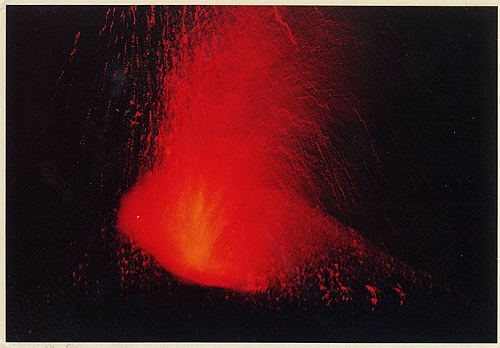 Postcards from the archive of Angela Carter Archive, Add MS 88899/3/4-24. © Courtesy of Susannah Clapp. Except as otherwise permitted by your national copyright laws this material may not be copied or distributed further.

As a great sender of postcards, it follows that Carter also received many in return. The large collection in her archive includes examples from other writer friends, such as one from ‘Jim’ [J G] Ballard, congratulating her on ‘your demolition job on Our Saviour’, referring to a documentary she had written and narrated irreverently deconstructing visual images of Christ. Aptly, Ballard chose a reproduction of Dalí’s surrealist painting of Mae West as a vehicle for his message, while comparing her achievement to that of other surrealist artists: ‘Breton + Ernst would have been proud of you’. Given the visual sophistication of both writers’ work it’s not surprising that they both enjoyed this means of communication. (For more on Ballard’s interest in and influence on visual art see Roger Luckhurst’s article on our site.)

And of course, sometimes the postcards we find in a writer’s possession were never sent but were kept for inspiration, such as Winston Levy’s souvenir postcard of the Empire Windrush that hung on his daughter Andrea Levy’s wall as a visual reminder of the true story that prompted her to write Small Island. 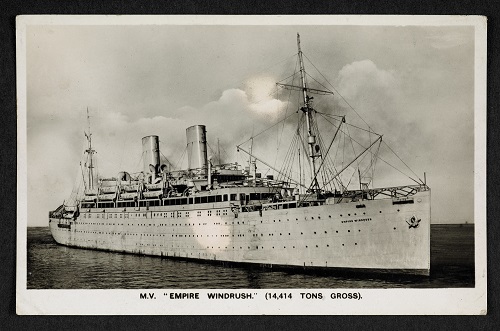 Postcard of Empire Windrush purchased by Winston Levy on board ship, 1948 © By kind permission of Andrea Levy

I’m off to look through my postcard collection… Meanwhile, if anyone is feeling lonely and in need of post during lockdown, see the brilliant Shaun Usher’s offer to send a ‘letter of need’.