To Sir With Love, a new appreciation for an old favourite

How are you spending the lockdown? Being at home could mean a chance to read all those books that you have never quite got around to. Or then again it could be an opportunity to re-visit some old favourites which in my case includes E.R. Braithwaite’s To Sir With Love. Published in 1959 this semi-autobiographical book tells the story of Rick Braithwaite who finds work teaching in a tough East End school in the early 1950s. It is an exploration of prejudice, teenage rebellion and triumph over adversity which sees the teacher come face to face with racism and kindness in post-war London. This is a great book to read at any time, but the difficulties that Rick faces in trying to interest his teenage class in their education will probably ring especially true for anyone faced with home schooling their children at the moment.

I feel very lucky that the Library has an annotated typescript of To Sir with Love in its collections, which forms part of the archive of the publisher Max Reinhardt, who managed The Bodley Head Press. Selected pages from the typescript have been digitised for Discovering Literature which means that you can enjoy reading an excerpt from the book, complete with E.R. Braithwaite’s handwritten annotations, even when the Library is closed. 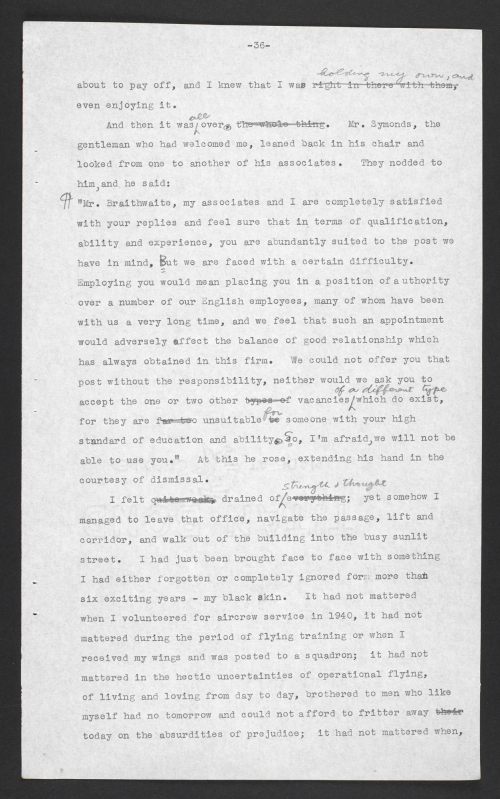 Typewritten draft, with copious manuscript amendments, of Braithwaite’s To Sir, With Love, published by The Bodley Head, 1959. Add MS 88987/2/10

In this insert from Chapter IV, Rick goes to an interview for a job as a Communications Engineer only to be rejected because the interview panel feel that their white workforce would not wish to be managed by a black man. The incident highlights the racism that was present in Britain at the time but which Rick had not experienced whilst serving as an RAF serviceman during the war. His disillusionment is complete when he telephones the other companies to which he had applied for work to inform them that he is black, only to be told that the jobs (for which he had been offered interviews) have been filled. Rick reflects on his upbringing and the Britishness which he felt growing up but which he realises does not mean that he is British in the eyes of British people. His pain is palpable and upsetting, yet for the purposes of the story his decision to turn his back on his pre-war profession leads him to teaching, which forms the basis of the book.

I would whole heartedly recommend this book to anyone, along with its sequel, Paid Servant (1962), which Braithwaite wrote about his subsequent time as a social worker. Please do take a look at the Discovering Literature webpages and those relating to Beryl Gilroy, the pioneering teacher and writer. Gilroy’s autobiography, Black Teacher, was published in 1976 whilst her novel, In Praise of Love and Children written in 1959 and only published in 1996 was featured in the Library’s Windrush: Songs in a Strange Land exhibition in 2018. Hopefully it will provide inspiration for all those parent-teachers out there.