Andrew Salkey and The Multi-Coloured Bear of Moscow Road

By Eleanor Casson, Archivist and cataloguer of the Andrew Salkey Archive (Deposit 10310), working in collaboration with the Eccles Centre for American Studies and the British Library. This blog is the first in a series looking at Salkey’s literary works. The blog will be followed by more in-depth pieces on Salkey’s career in the Autumn, in the run up to the delayed launch of the Andrew Salkey Archive.

What do you get if you cross Fidel Castro with Paddington Bear?

As more of us are stuck at home looking for ways to inspire and engage our children, I thought that I'd use the first blog in this series on Andrew Salkey as an opportunity to look at an unpublished children’s story from Salkey's archive, which he wrote with his two sons, Jason and Eliot Salkey. Written in the late 1960s, it’s a particularly impressive story as both of Salkey’s sons were under ten when they wrote it. It’s a fun children’s story about a larger than life bear and his adventures around London, influenced heavily by Salkey’s love of Cuba and Fidel Castro, and his own experiences as an immigrant in London.

The Multi-Coloured Bear of Moscow Road is about a large multi-coloured bear called Fidel or ‘McB’ to his friends. Salkey visited Cuba in 1968 for the Cultural Congress of Havana, which undoubtedly inspired his family with this story as the character of McB is, unsubtly, based on Fidel Castro. He lived on Moscow Road, the same road as the Salkey family home before they moved to the USA in 1976. The style of the story is similar to Paddington Bear and follows the exploits of McB as he visits London for a yearlong trip. McB is ’a warm weather bear’ born in Havana, Cuba ‘during the first week or so of 1959’. To differentiate him from any of the other bears found in children’s literature Salkey and his sons gave him a ‘unique’ style. He is described as having eyes that are ‘Caribbean blue’ and a brown fur coat ‘speckled all over with black, purple, green, yellow, Seville orange and red smudges’ and that he wore ‘a multi-coloured militia soft cap’ and chain-smoked cigars. I think it is fair to say he would not be the greatest role model for the children of today! Unfortunately, Salkey’s archive does not include any artist’s impressions or illustrations of McB, so I have put together my own interpretation of what he could have looked like on the jacket sleeve! 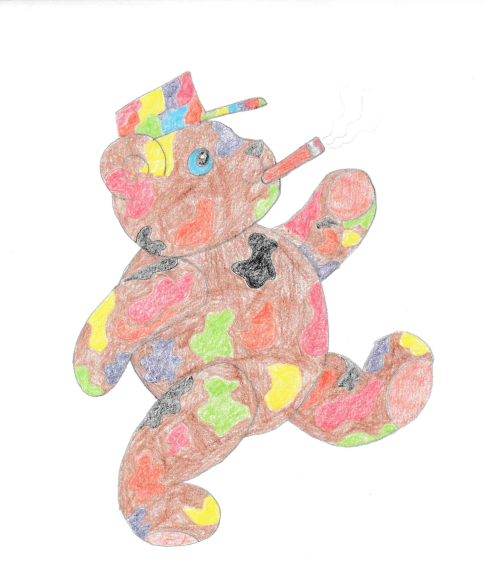 The story follows McB as he explores London, stopping off at well-known landmarks such as Buckingham Palace, London Zoo and the Serpentine. Although the chapters do follow a conventional structure of a children’s story book Salkey is still able to inject his trademark satirical commentary into McB’s interactions, playing on his likeness to Fidel Castro. The bankers McB meets at the Royal Mint are wary and suspicious of him and he is not welcome, whilst the Dockers at the Pool of London wave and cheer when they see him.

Salkey and his sons are also able to create a subtle commentary on being an outsider in London. Written from the perspective of McB as someone who does not fit in anywhere in London, he stands out with an overly large body and vibrant fur. He is wary of the ‘red monster’, which turns out to be a red bus, he daydreams of ‘Spanish jars of logwood honey’, and he writes letters home to his brother. As he becomes more familiar with London, McB learns to love the ‘friendly red monsters’ and buys a fleet of buses to send home. He also builds friendships with his human neighbours, and throws a birthday party. McB finds a way to make London his temporary home as he buys a house and marries a lovely ‘lady bear’. Although only an assistant in the authorship of this story, Salkey’s experience of being an immigrant in London is clear to see.

Salkey did attempt to have the manuscript published; he sent it to the publishers of Paddington Bear, Collings Publishers, as well as Oxford University Press among others. Although some of the publishing houses were impressed that children so young had written the manuscript, the consensus was that the story was too much of an ‘in-family joke’ and that it did not fit with the rest of their book list. Salkey’s archive includes the correspondence from the publishers explaining their refusals, as well as a typescript and carbon copies of the story.

Posted by Eleanor Dickens at 12:00 AM