By Greg Buzwell, Curator of Contemporary Literary and Creative Archives. Read more about the Angela Carter Archive on Discovering Literature and see the entire catalogue entry on our catalogue, Explore Archives and Manuscripts at Add MS 88899. Listen back to our event, Angela Carter: a Celebration, presented in association with the Royal Society of Literature at the British Library on 24th November 2016.

To mark what would have been the year of Carter’s 80th birthday, we wanted to give everyone another chance to listen to Angela Carter: A Celebration, an event presented in association with the Royal Society of Literature at The British Library on 24 November 2016. Edmund Gordon, author of the multiple award-winning The Invention of Angela Carter: A Biography talks to Lisa Appignanesi, Susannah Clapp and Pauline Melville, all friends of Carter. Something to enjoy, perhaps, while raising a drink (Carter enjoyed wine, I believe) of your choice in honour of Carter’s memory, and in celebration of her work.

Angela Carter, had she lived, would have celebrated her 80th birthday on May 7th this year. Sadly, we will never know what she would have made of the current world situation but, from her books, articles and interviews we can be certain that her opinions would have been perceptive, original and expressed with a refreshingly bracing honesty and vigour. There are many things to admire about Carter’s life and work, but perhaps none more so than the fact she wasn’t afraid of tackling the big subjects and addressing each one – sex, death, politics, class, feminism and parenthood to name but a few – with a devil-may-care directness. Even when people disagreed with her observations, as some did for example with The Sadeian Woman (1979) - her influential critique of pornography and the cultural determinism of gender and sexuality - it’s impossible not to admire the intelligence, wit and originality with which her ideas were expressed. 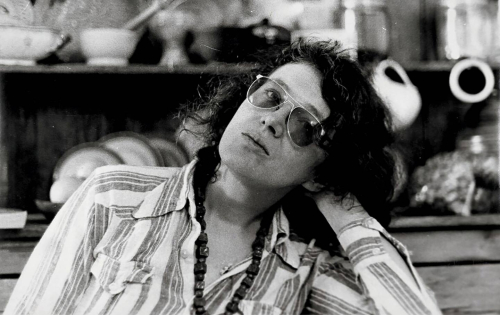 Angela Carter, circa 1975. (c) Displayed with the permission of the Estate of Angela Carter

During her career Carter wrote novels and short stories that changed the landscape of British fiction. In particular the books she published from the early 1970s onwards display a remarkable originality. The Infernal Desire Machines of Doctor Hoffman (1972), for example, largely inspired by her experiences of Japan marries surrealism and philosophy to tell a tale that seems more relevant than ever in today’s world of computer games and virtual reality. The Passion of New Eve (1977) meanwhile, one of the key works of 1970s feminism, satirises simplistic notions of gender, sex and identity. Angela Carter was always well ahead of the curve. The stories in The Bloody Chamber combine feminism and fairy tales with sublime Gothic imagery to inspire emotions in the reader that are by turns shocking and uplifting. Her final two novels, Nights at the Circus (1984) and Wise Children (1991) took her work in new directions. Wise Children, with its highly theatrical – in every possible sense of the word – cast of characters is a stylish and original take on highbrow and lowbrow art and the claims both have for a place in the world, and in our affections. 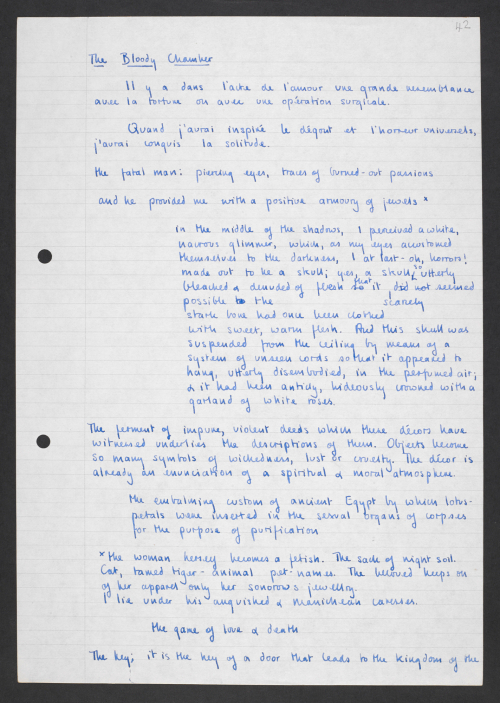 A page from Angela Carter’s manuscript draft of ‘The Bloody Chamber’. Add. MS 88899/1/13. © Displayed with the permission of the Estate of Angela Carter

With the support of the Estate of Angela Carter the British Library was able to feature highlights from her papers on its Discovering Literature: 20th Century website. From articles on themes such as fairy tales, cross-dressing and identity to explorations of individual collection items such as Carter’s manuscript drafts of Nights at the Circus or her notes about Tooting Granada Cinema the website allowed us to bring items from the archive to a worldwide audience. Indeed, we could add to the picture of Carter given by her archive by including other British Library collection items, such as her experimental poem 'Unicorn', first printed in 1963 in Vision, a magazine edited by Carter and Nick Curry when the pair were students at Bristol University. The poem, which takes the medieval myth of the unicorn and virgin and transposes it to a sleazy modern setting of pornography and strip clubs provides an early precursor to novels like The Passion of New Eve and the stories in The Bloody Chamber. 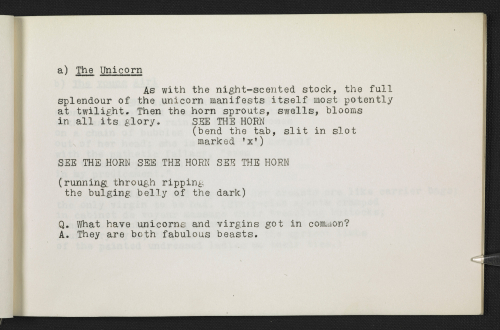 A page from Carter’s experimental poem ‘Unicorn’, from an edition published by the Location Press in 1966. Cup.805.a.9. © Displayed with the permission of the Estate of Angela Carter

Curators always have favourites among the archives they look after, even if in many ways they’re not really supposed to ‘value’ one collection over another. Like passing the port to the right or snoozing through the Queen’s speech on Christmas Day curators having favourites is slightly frowned upon in some circles. All the same, given that an archive of a writer, politician, publisher, actor, etc., should provide as complete a picture as possible of their life and work the archive of Angela Carter is undeniably a fascinating source of wonders.

Posted by Eleanor Dickens at 12:00 AM