“List Ye Landsmen all to me” about Nautical Drama on Playbills

The British Library have circa 100,000 playbills digitised in greyscale – a legacy of an attempt to use OCR (Optical Character Recognition) to capture the rich and dense details packed onto the playbills. Machines couldn’t succeed in translating the variations of text in font design, size and typographical layout – all characteristics of these eye-catching playbills. There are near a quarter of a million playbills in the Library’s collections but they are not catalogued: there has never been and never will be the resource to record their details.

It’s not always easy to find records and reports of these performances; There’s no newspaper report to be found for  ‘Gallant Tom …’ performed at the theatre in Deal in 1842 – but these playbills are crucial pieces of historical evidence and it is a vital undertaking to capture their details by marking and transcribing titles, genres and dates to make them more findable for future research. That is exactly what the Library’s crowdsourcing project, In the Spotlight strives to do; with your help we can bring these past entertainments to life. To help you navigate your way through the choppy waters of this collection, here’s an eyeglass to look at the nautical drama to be found all over these playbills. 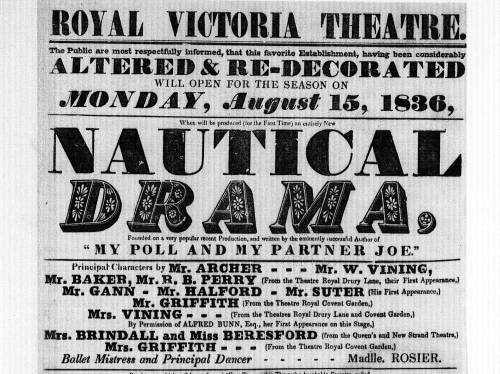 ‘The Sea! The Sea! The Open Sea!’; ‘The Ocean of Life! Or, Every Inch a Sailor’; ‘Blue Anchor; or, a Tar for all Weather’; ‘A Dream at Sea’; ‘Floating Beacon! Or, The Weird Woman of the Wreck'… Through the golden age of the playbill (the 1770s to the 1860s) we can see how theatre audiences across the country were thrilled by all kinds of genres of plays and general entertainments, but the popularity of nautical melodrama is especially apparent from any casual glance at surviving examples. Looking at the titles inspires further investigation and not just in the confines of the history of drama. Playbills contain valuable additional detail and paratext: cast listings, plots summaries, descriptions of sets and scenery, song titles and notices to the audience. These throw light on the nature and functioning of past entertainments – all of which can tell us about the wider social, economic and political history of the nation.

So why was there such an abundance of nautical themed plays during this period? For Britain and Ireland this was a period of almost constant war - the War of Austrian Succession (1739–48), the Seven Years War (1755–63) and the French Revolutionary and Napoleonic wars (1789-1815). The Navy and the maritime industry were key to the nation’s aggressive expansion and domination. It had immediate relevance. Audiences were familiar with or personally connected with people in industries in ports and beyond the seas. 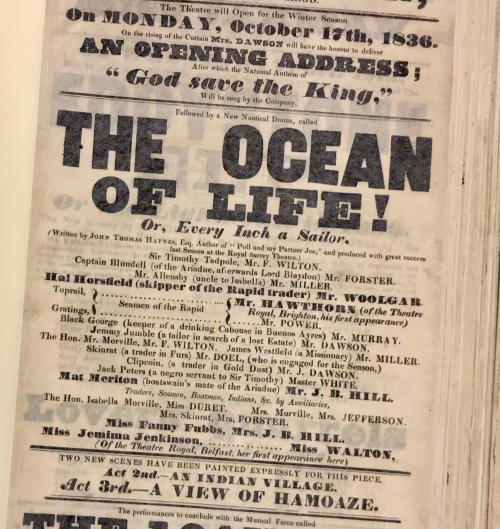 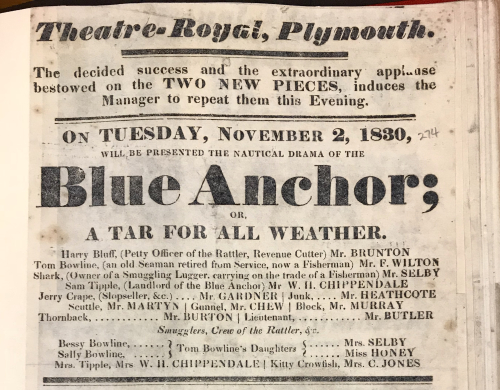 The image of sailors and seafarers had an almost national symbolism like nowhere else in the world. The characterisation of these rugged figures put wind in the sails of literary hacks and dramatists. A tide of plays with very similar plots, dialogue, dramatis personae, and songs repeated in common – often riffing off the earlier tradition of popular street ballads – flowed to audiences in London and across the country. The ‘character of a British Sailor’, even across different genres, from operettas, burlesques, national-historical dramas, to romances, comedies and farces, had consistent but complex and often contradictory features. Whether a play centred on sea battles, shipwrecks (‘The Tempest’ always a strong influence), pirates, lovers’ torments and quarrels, injustices, or just plain old jolly shindigs and knees-ups, the British sailor’s portrayal involved a distinctive and a grotesque idiom with exaggerated speech, sea-phrases, dress, physique and bearing. These were the nation’s Hearts of Oak, Tars for All Weathers. Their manliness was defined through a brave and virtuous demeanour. They were daring, ‘true’, honest, uncomplaining, faithful and loyal, cheerful, and scorned all dangers and discomforts. It was an idealised representation. 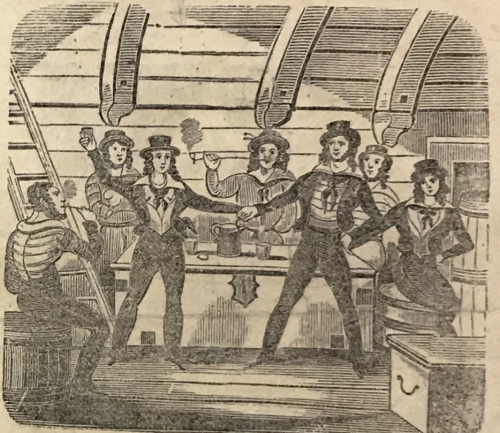 Theatres were keen to deliver grand spectacles of nautical entertainment with songs, dancing, hornpipes, fight scenes, wrecks, “real fires”, and mechanics including realistic moving wooden ships (shipwrights from Woolwich helped build props at the Theatre Royal, Deptford). For what varieties there were in the plots, most plays shared moral, xenophobic and racial stereotypes prevalent in British culture and behaviour from the time. Foreigners were cowardly, ‘sissy’; black people were pathetic (to be saved or pitied) or were monstrous and barbaric – a threat to the nation and its women. The plays appealed to spurious sentiment and ‘national enthusiasm’. Two very idiomatic plays ‘Black-Eyed Susan; or All in the Downs’ and ‘Gallant Tom; Or, A Sailor’s Life Ashore & Afloat’ shared many of these ingredients. Douglas Jerrold’s play, Black-Eyed Susan, first performed in 1829 at the Royal Surrey Theatre, was itself based on older popular ballads as well as being almost identical to an older play ‘Thomas and Sally; or the Sailor's return’ (1760). Jerrold’s archetypal nautical melodrama played a record 300 consecutive nights – understandably other theatres were desperate to emulate its success. It is the single most common play from the period, certainly on evidence from the playbills in the collection at the British Library. In the play, William and Susan are married before he goes to sea on a man-of-war. When his ship returns to port, his captain, Crosstree, sees the reunited lovers kiss and is seized with jealousy. A drunk Crosstree later tries his luck with Susan and is struck with a sword by William. Condemned for striking a superior officer he is sentenced to death. In a sign of moral recompense, the Captain provides evidence that William was honourably discharged from the service the very morning of the incident and so is spared as a civilian. 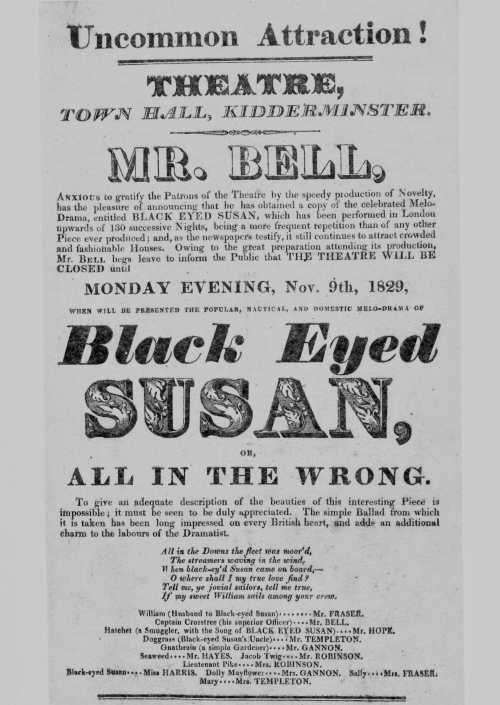 One of the more unusual playbills for ‘Black-Eyed Susan, or All in the … “Wrong”! from Kidderminster in 1829. British Library, Playbills 291. 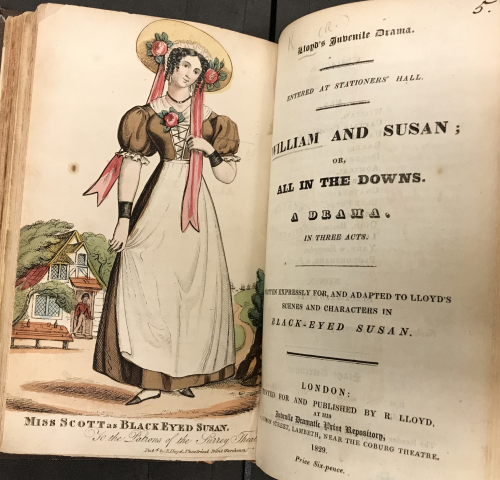 Plays of the category of ‘Black-Eyed Susan’ were perpetually popular with the patrons of Britain’s theatres because they have a deal of human nature in them and just a sufficiency of breezy humour, observed a reporter for the Western Daily Press looking back on the period in 1898; “occasionally it lapses into the boisterous it is true, to put all parts of the house in a good temper, and as virtue ever triumphs in the end at the expense of vice there is really little to grumble at.”.

Masculinity is prominent, but it must be understood that the maritime world was certainly not just a male sphere. Women’s contributions and participation in coastal communities is a vibrant area of current research into port towns and shipboard histories. Mister Jack Tar relied on many a Miss and Mrs: wives, mothers, lovers, service providers, traders; women filled the theatres invested with interest and belonging. Women were not just passive observers of all the tar and muscles on stage; there are instances where they played the very roles themselves. In 1836, the actress Mrs. Vining took up, ”by particular desire”, the role of William on stage at the Victoria Theatre. 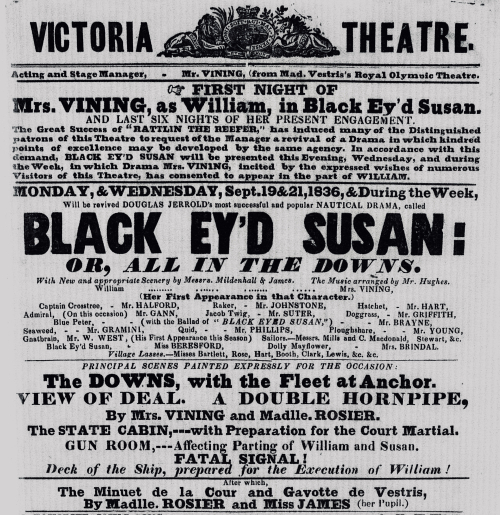 Later, in 1864 in Melbourne, the Australasian reports that “traditional veneration cherished for the wooden walls of Old England and the honest manly character of the British Sailor” had a special feature in a performance of ‘Black-Eyed Susan’ when ‘Lady Don’ “portrayed the noble qualities and peculiarities of Jack Tar with surprising fidelity as natural as though she had been to the manner born or passed the greater portion of her life on board a man-of-war.” 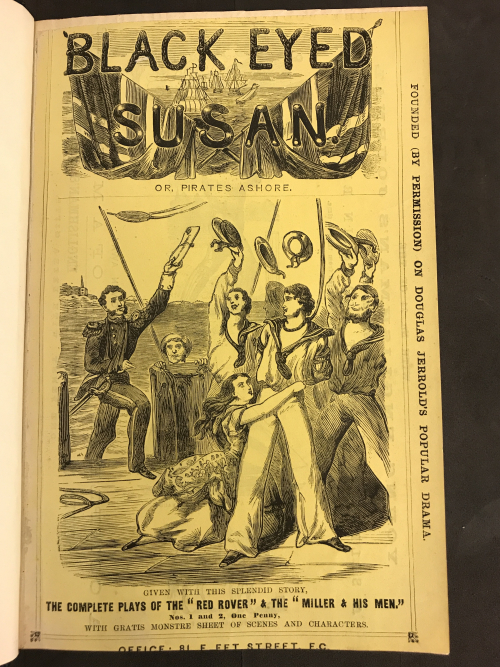 One of the reasons why the sailors of nautical melodrama proved so popular was the widespread fascination with their “otherness”, they seemed to be from a different world and provided perfect material for dramatic and theatrical depiction. But this is where there is an intriguing raft of contradictions, something that has been called the ‘Jack Tar Paradox’; these Sons of Neptune were so familiar, yet so strange. They walked funny and talked funny appearing like foreigners in their own country. Their reputation for vice, swearing, drunkenness, and libertinism ran parallel to their reverence as defenders of everything cherished as British. Sailors actually spent longer in port than at sea and the moral anxieties of society followed them very closely. Plenty of ballads and songs tell of sailors spending fast and free when on land. The British Museum insisted on ticketed entry in the early 19th century, one justification for this was to shield its dignified galleries from gallivanting sailors and lady-friends when on shore-leave. 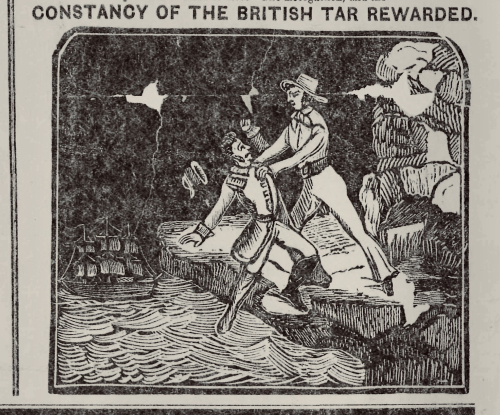 Playbill for ‘The Lost Ship’ performed in Birmingham in 1852. British Library, Playbills 199. 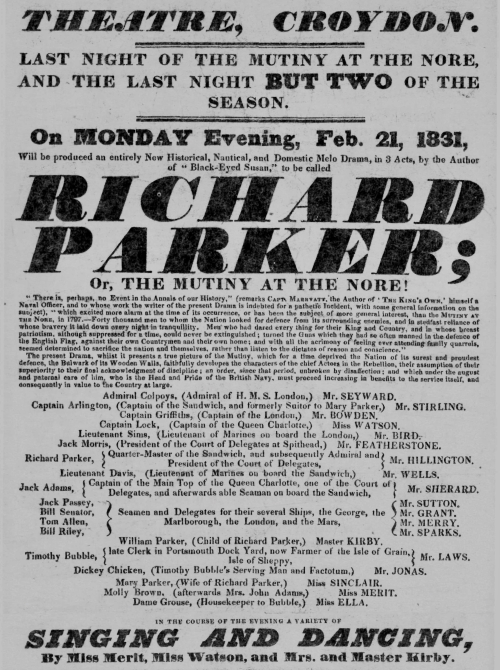 Playbill for ‘Richard Parker; Or, the Mutiny at the Nore. British Library, Playbills 276.

But there are deeper tensions too. Developing class identity amongst Britain’s audiences from industrial communities created empathy, they could relate to the strong camaraderie of sailors and the conditions they endured. Whilst naval victories could be quickly translated into stage plays (several plays immediately followed the infamous British naval victory of the “Glorious first of June” in 1794), audiences also identified with calls for a fair deal and wages for Jack. Jerrold (who had served in the Navy himself), also wrote another popular play ‘Mutiny at the Nore’ which added to the legend and legacy of the 1797 sailors’ revolts popularised in ballads and especially about one of its leaders, Richard Parker. There is a stark class tension between William from the Lower Deck and his Captain. The wooden walls of the sailors were the factories of the Sea; these toilers of the sea safeguarded Britain’s pursuit of trade, influence and wealth. The fact that the nautical genre had by the 1880s descended almost entirely into parody and farce gives some legitimate cause for suspicion that the genre was ‘defused’ and made safe. The blockbusting success of Gilbert and Sullivan’s ‘H.M.S. Pinafore’ in 1878 seemed to prepare the decks for Morecambe and Wise (or maybe Eric and Ernie were more the ‘Tars at Torbay; or sailors on Saturday night’?!). 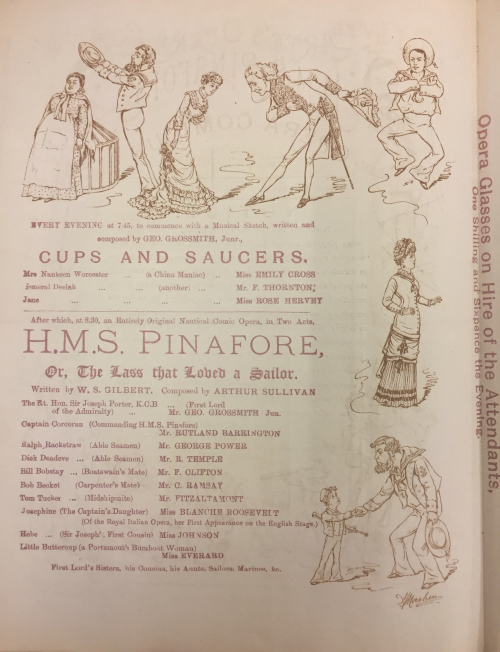 Page from the programme for H.M.S. Pinafore at the Olympic Theatre. British Library.

What did the sailors themselves think of all this? They seem to have revelled in it – all publicity is good publicity! They were keen, often over-keen members of the audience. The large water tank at London’s Saddlers Wells Theatre had to be kept guarded against sailors breaking from the stalls and diving in the tanks to swim about the model ships (the price of admission included a pint of port or punch!). The ‘Theatre Rural’, way out West in Devonport, had a notoriously rowdy audience where stage invasions and heckling was common. Playbills for the theatre began to make special notice that “Constables are in constant attendance to keep good order”. The famous sea songs of Dibdin (a landsmen), contrary to some beliefs, were actually well beloved of many sailors.

James Davey, Singing for the Nation: Balladry, naval recruitment and the language of patriotism in eighteenth-century Britain, The Mariner's Mirror, 2017, 103:1, 43-66.

Matthew Kaiser, The World in Play: Portraits of a Victorian Concept. [Part II: Portraits / Fair Play in an Ugly World: The Politics of Nautical Melodrama, pp51-84]