“Without being a burden to anybody”: A letter from Ann Radcliffe to her Mother-in-Law from afar.

by Zoe Louca-Richards, Curator of Modern Archives and Manuscripts. For an introduction to Anne Radcliffe, visit Discovering Literature: Romantics and Victorians. For a digitised edition of Radcliffe's letter to her mother-in-law (part of Add MS 78689), click here. For a contemporary biography of Ann Radcliffe see Rictor Norton's The Mistress of Udolpho: The Life of Ann Radcliffe (BL Shelfmark: YC.2000.a.3820).

With the restriction on travel and strict social distancing regulations of the past few months, many of us have had to adapt to caring for our parents (or older relatives) from afar. This challenge is certainly not one unique to the 2020 Covid-19 pandemic. We often take for granted the remarkable ease of movement we are afforded today. For people in the past without the fast and convenient luxury of modern transport, navigating this familial duty remotely was a necessity — and with no Face-time or WhatsApp for easy and efficient contact, communications were dependent on pen and paper alone. A unique letter held in the archive at the British Library, penned by 18th century gothic romancer and poet Ann Radcliffe (1764–1823), offers us an intriguing insight into the testing situation of distanced parental care in the late 1700s, as well as a rare glimpse of her personal affairs. A digitised copy of the letter can be found here.

The letter (Add MS 78689) was written from Ann Radcliffe to her mother-in-law, Deborah Radcliffe, and although undated is believed to have been written in the 1790s, during the height of Radcliffe’s success.  Unfortunately it is incomplete, with the middle (bottom half of the page) of the letter missing. Never the less, we can piece together a narrative from what remains. It begins “Dear Madam” - a somewhat impersonal greeting for a relative by today’s standards, but not uncommon in the 18th century – and continues to discuss her Mother-in-law’s financial and living situation. 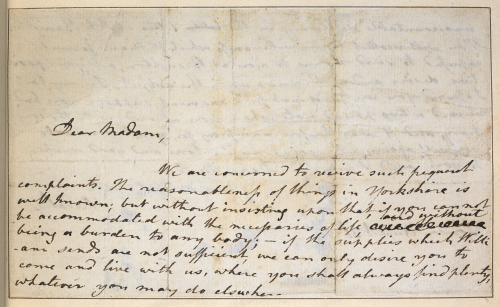 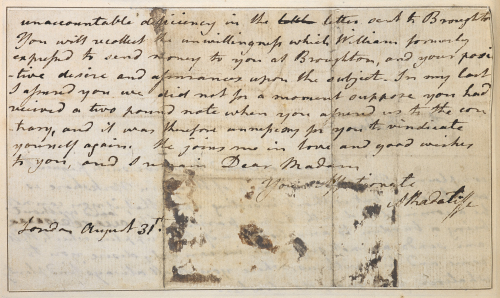 The overall tone of the letter is frosty and seems more that of a chastising parent than of a concerned child-in-law. In the first part of the letter, Ann draws into question her mother-in-law’s continued complaints of financial hardship, noting that “The reasonableness of things in Yorkshire is well known”. Nonetheless, whether through duty or care, Ann assures her that she and William (her husband) will continue to support her. She adds that if she cannot be provided the necessities of life with their current level of financial assistance, without becoming a “burden to anybody”, she should move in with her and William, where she “shall always find plenty”.

The second part of the letter discusses some funds that Ann and William had sent to Deborah, which appear to have gone astray in transit. The situation seems a matter of contention, with Ann remarking “You will recollect the unwillingness which William formerly expressed to send money to you at Broughton […] I assured you we did not for a moment suppose you had received a two pound note when you assured us to the contrary, and it was therefore unnecessary for you to vindicate yourself again”. One can only assume that Deborah must have made her feelings of accusation very clear in the preceding letter to Ann. Tensions are clearly high, and without wanting to fall into any tired mother-in-law tropes, the letter gives the impression that Deborah and Ann’s relationship may have been strained. Ensuring the care of her mother-in-law from afar appears to be a frustrating charge for Ann. Nevertheless, she signs the letter off with her love and good wishes. Unfortunately, this may be the only evidence of Ann’s relationship with William’s mother that we are ever afforded. The authoress appears to have been a very private individual - she made very few public appearances during her lifetime, and left behind few manuscript items. This letter is one of only a handful of known surviving autograph documents. Whilst scholarship on her published works is extensive, the lack of primary material has resulted in few biographical accounts. The Pre-Raphaelite poet Christina Rossetti is alleged to have started a biography of Radcliffe in the 1880s as part of the Roberts Brothers’ ‘Eminent Women’ series (AKA. the ‘Famous Women’ series in the US), but abandoned the endeavour due to the lack of information. What we know of Anne comes from only a handful of primary sources. Her first biography, Sir Thomas Noon Talfourd’s Memoir of the Life and Writings of Mrs. Radcliffe (1826), was penned 3 years after her death, and was based on information provided by William. It has been speculated that William's careful posthumous management of his wife's reputation may have extended to the destruction of her papers, but there is no evidence to prove this. 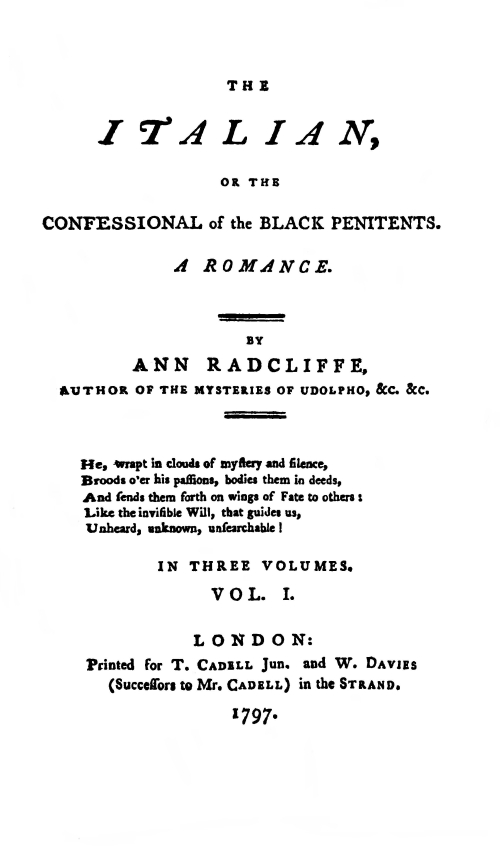 The bristly nature of the communications between Ann and her mother-in-law, draws to mind the relationship of Ellena and Marchesa di Vivaldi in The Italian, or the Confessional of the Black Penitents (1797). It was Ann’s final novel (to be published in her lifetime), and its dark tale of love and persecution sees the Marchesa -- in the role of evil mother-in-law -- conspiring against her prospective daughter-in-law, Ellena. Could Ann have used her own experiences with her mother-in-law as inspiration? Many scholars have sought to draw parallels between Radcliffe and her heroines in an attempt to better understand the authoress. (The most frequent comparison being between Radcliffe and Emily from The Mysteries of Udolpho [1794]). Nevertheless, the relative lack of primary source material relating to Radcliffe means that any attempt to identify where -- or indeed if -- this relationship exists can only ever be speculative.

Without more sources we cannot make a concrete judgement about the relationship of these two women, and the letter leaves us wondering more about the Radcliffe family dynamics than it tells us. Never the less, this fragmented letter is a precious and rare remnant of Ann’s life, and many of us can undoubtedly sympathise with Ann’s exasperation, and the frazzled relationships that can coincide with caring for each other from a distance.

Posted by Eleanor Dickens at 10:55 AM