Tales of Terror and Wonder – A Gothic Legacy

by Greg Buzwell, Curator of Contemporary Literary and Creative Archives. In this final blog highlighting our digital collections, Greg reflects on curating the popular exhibition Terror and Wonder: The Gothic Imagination, and its online legacy.

You can’t keep a good exhibition down. Even when the doors close to the public for the final time the exhibition catalogue, the online content, the learning resources and the inspiration it inspired in visitors all live on. With so many art galleries, libraries and museums currently unable to receive visitors in person now seems an ideal time to look back at a favourite exhibition from the past, and to explore some of the online content that helps keep its legacy alive. At the time of writing the sun is shining and the skies are blue but the show I want to look at is, perversely, the one synonymous with fading light, chills and shadows. A little bit of seasonal good weather isn’t going to keep any Gothic horror worthy of the name in hiding and so let’s step into the shade for a moment and take a look at the (undead) life and legacy of Terror and Wonder: The Gothic Imagination. 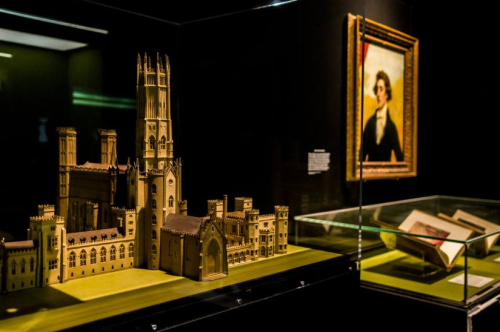 Terror and Wonder: The Gothic Imagination – gone but not forgotten. A photograph of the section of the exhibition dealing with William Beckford, his novel Vathek and his impossibly Gothic house Fonthill Abbey. Photo by kind permission of Tony Antoniou.

In many ways Terror and Wonder, which ran from early October 2014 to late January 2015, was 250 years in the making. Like virtually all exhibitions at the British Library, and elsewhere come to that, it was run to coincide with an anniversary. Christmas 1764 witnessed the publication of Horace Walpole’s novel The Castle of Otranto. The first edition of Otranto, in the best traditions of Gothic literature, arrived masquerading under false colours. The book, published without Walpole’s name on the title page, claimed to be a modern translation of a much earlier work recently discovered in an old family library in the North of England, a book which itself was based on an even older narrative. You can always rely on Gothic literature, which is never averse to a compelling shaggy dog story, to pile successive layers of strangeness upon a foundation built of smoke and mirrors. When the book proved to be a huge success Walpole came clean, added his name to the second edition and gave it the subtitle ‘A Gothic Story’. Gothic literature, which would go on to include the romances of Ann Radcliffe, the visceral horror of Bram Stoker’s Dracula and the beguiling short stories in Angela Carter’s The Bloody Chamber had been born. 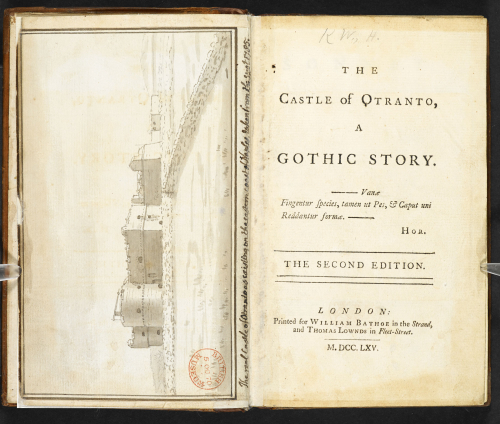 The second edition of The Castle of Otranto published in 1765, complete with the subtitle ‘A Gothic Story’. This is Walpole’s own copy, together with a watercolour of the real castle given to him by an admirer of the book. At the time of writing the novel Walpole was unaware that Otranto actually had a castle – he had simply chosen the name at random from a map of Italy. C.40.c.24

Early in the planning of every exhibition a choice has to be made regarding how the subject will be explored. For example, is it best to take a chronological or a thematic approach? Terror and Wonder took a chronological line, exploring how Gothic developed from The Castle of Otranto onwards. The alternative would have been to look at, say, vampire fiction or mad scientists all in one go. We didn’t want to put all of our vampires in one casket, however, so Lord Ruthven, Varney the Vampire, Carmilla and Count Dracula all took their own turn as they appeared in the chronology rather than being grouped together. Even so the proliferation of Gothic literature in the 20th century necessitated some collective gathering together of particular themes; as a result, folk horror and body horror, to take just two examples, had their own self-contained sections. In retrospect, and looking at it from a distance of over five years, by combining chronology with a bit of a thematic approach we did manage that rare and mystical feat of having our cake and eating it.

Concluding an exhibition is also a challenging moment. Do you offer a summary of everything that has gone before or do you try to look ahead at what may be the next developments in the subject? With Terror and Wonder we brought matters up to the present day, using specially commissioned photographs taken by Martin Parr of the 2014 Whitby Goth Festival. This allowed us to touch upon Gothic fashion and lifestyle, together with Goth music and steampunk - all of which, to some degree, owe a debt to Gothic literature. From Horace Walpole to Siouxie Sioux in a few beautifully dark moves. 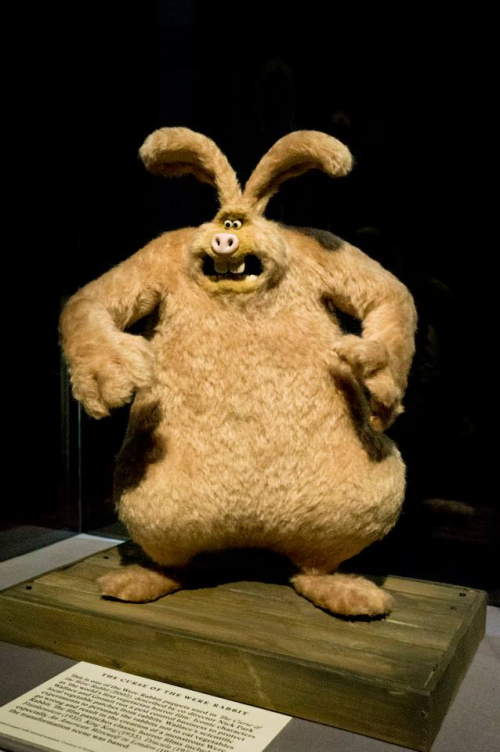 Just about everyone’s favourite exhibit – a model of the Were-Rabbit, kindly loaned for the exhibition by Ardman Animations. It isn’t always possible to do but where it can be included humour tends to work well in exhibitions. People remember the comic, the strange and the wonderful. Just look at those gorgeous fluffy feet …

An exhibition takes years in the planning but is usually only open for a matter of three or so months. Their ephemeral nature makes legacy all the more important. There is always a catalogue or an accompanying book, written by curators and academics, and these days there is always a considerable amount of online content. Many of the links in this piece will take you to pages on our Discovering Literature websites. From articles exploring  Gothic Motifs and The Victorian Supernatural through to in-depth looks at individual novels and poems Discovering Literature allowed us to look beyond the narratives we could explore in the display. An exhibition label only allows for 80 or so words – barely enough for an excitable and verbose curator wishing to outline a pet theory to get warmed up. Discovering literature allows for a much more detailed, imaginative and measured analysis to be put forward. It also allows for items which didn’t make it into the exhibition to have their moment in the spotlight, thus making the collections even more widely available. 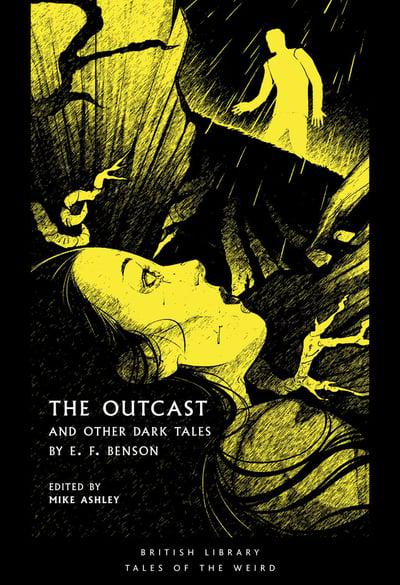 The Outcast and Other Dark Tales, by E.F. Benson. Edited by Mike Ashley. One of the ongoing series of books which first appeared in the wake of the Terror and Wonder exhibition.

Other legacies of Terror and Wonder include an adult learning course in Gothic literature; a series of books exploring the work of various Gothic authors such as Vernon Lee and E.F. Benson, together with anthologies collecting together uncanny tales with a particular theme such as Mad Scientists  or Botanical Gothic. Also, it has become something of a tradition to hold a Gothic-themed event around the time of Halloween. Many British Library exhibitions now go on tour once their initial run at the Library has finished and it isn’t beyond the bounds of possibility that a revived and reanimated version of Terror and Wonder could appear at a new venue in the future. We were also able to add to our collections following the exhibition, not least with the acquisition of the Papers of Robert Aickman. At the time Terror and Wonder was being put together the curatorial team were keen to include examples of Aickman’s work but we simply didn’t have the material to do him justice. Although too late for the show subsequently acquiring his archive means his papers can be included in any future displays of Gothic literature. Exhibitions provide excellent ways of forging new contacts and building new partnerships. As a result, via those contacts and the publicity surrounding an exhibition, new collections frequently arrive in the wake of any display.

These days virtually every British Library exhibition will have its own digital legacy. Terror and Wonder provides just one example, and there is plenty more to explore. Happy hunting.