by Tabitha Driver, Cataloguer Modern Archives & Manuscripts. Find out more about the Library's collections of material relating to Alexander Pope on Discovering Literature.

Though we have been unable to explore physical collections directly during the last few months, their materiality exercises a continuing fascination. Printing, handwriting, paper, and writing tools all provide evidence of the processes of creation and transmission that’s sometimes not at all easy to reproduce in digital form. A writer’s own manuscripts can reveal much, from the quality of paper to revisions, insertions and rewritings. Not all writers start work with a fresh sheet of paper, either. Used scraps, old envelopes or discarded documents can all serve just as well, whether snatched up as a matter of urgency or simply for economy’s sake.

One such case is the 18th century poet Alexander Pope (1688-1744). Early in his career Pope produced translations of Homer’s two great epic poems, The Iliad and The Odyssey. Pope’s Iliad took him over six years to complete – at times he despaired of ever finishing – but when it was finally published, by subscription and issued in parts from 1715 to 1720, it paid off handsomely. Thanks to his earnings from both Homeric epics, Pope acquired invaluable financial independence; as he strikingly declared in a poem from 1737: “But (thanks to Homer) since I live and thrive,/Indebted to no Prince or Peer alive” (Epistle 2, ii.68–9, Poems, 4.169).

Pope drafted his Homeric translations on the backs of old letters sent to him by friends, family, writers, and other public figures, and on other written fragments. Some years after his death, the drafts were presented to the British Museum in three volumes (Add MS 4807-4809): volumes one and two are the draft translations of The Iliad and the third is The Odyssey. They were early on a source of interest. Samuel Johnson, who described Pope’s Iliad as “the noblest version of poetry which the world has ever seen” examined the manuscripts at the Museum closely for his life of Pope (Johnson, Lives of the poets, ed. G H Norman (1905) vol. 3, p. 119), and printed comparisons between selected verses from the draft and published versions of The Iliad. He put down Pope’s use of old letters for writing paper to “petty artifices of parsimony”, a sign of the poet’s tendency to excessive frugality. You can find out more about the manuscripts, and read a selection of folios from Add MS 4807, on the British Library’s Discovering Literature website, along with Pope’s sketch of Achilles’ shield from Add MS 4808. 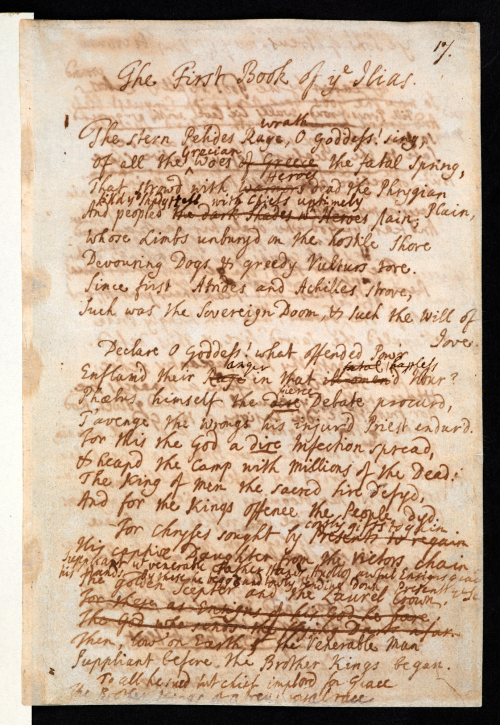 Besides what we can see of Pope’s translating and writing process from the manuscripts themselves – the crossings out and insertions, and the variances from the published text that Johnson observed – the mixed bag of unrelated letters and notes on which they were written confer a rich additional layer of significance. They provide a fascinating insight into the development of Alexander Pope as a young writer in literary London of the early 18th century, and the coffee house milieu in which he moved, with its literary and political alliances, rivalries, business and friendship. 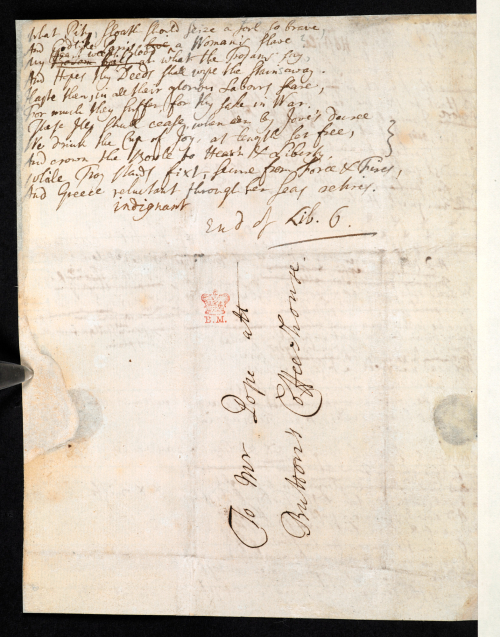 The writers of the letters and notes include Pope’s friends John Caryll, the Jacobite Baron Caryll of Durford, Edward Bedingfield of Grays Inn, Barnaby Bernard Lintot, Pope’s publisher, Charles Jervas, portrait artist and painting instructor of Pope, and Anne Finch, Countess of Winchilsea, poet, among others. 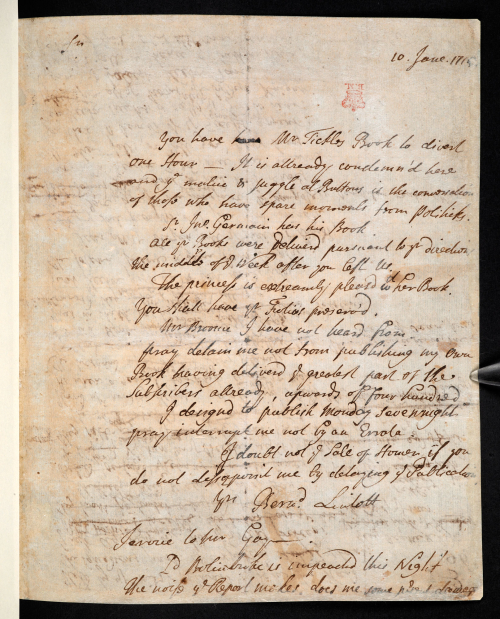 Topics touched on in the letters are miscellaneous too. They range from literary matters, such as publication of The Rape of the Lock (Pope’s mock-epic poem about the theft of a lock of hair) in 1712, instructions for the printer Jacob Tonson regarding Pope’s translation of the Sarpedon episode in Poetical miscellanies (1709), and the critical reception of a rival translation of the first book of The Iliad by Thomas Tickle, published in the same month as Pope’s (June 1715), to family affairs, such as medical advice and investments in the South Sea Bubble.

Thanks to the poet’s economical habit of re-using old paper for his writing, the manuscripts of “Pope’s Homer” have acquired a double significance. On the one hand they are important as the original drafts of his hugely successful translations of Homer’s Iliad and Odyssey. On the other, they offer us a vivid record of Pope’s life and times during all the years he worked on them. 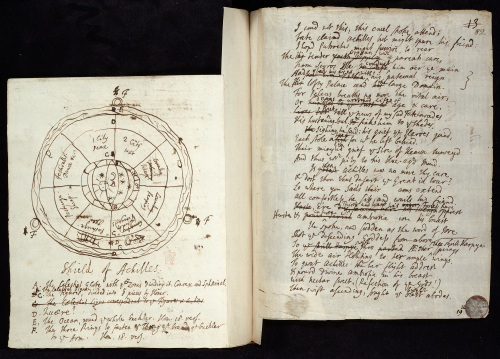 Posted by Eleanor Dickens at 3:55 PM