By Zoë Wilcox, Curator of Contemporary Archives and Manuscripts 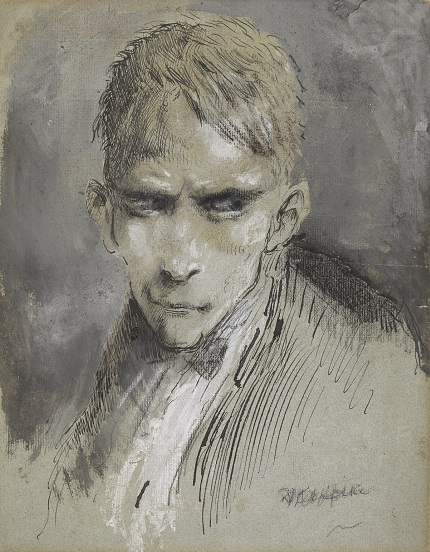 Drawing of Steerpike from the Gormenghast books. © Estate of Mervyn Peake

Today we are announcing the acquisition of over 300 drawings from the pen of one of the 20th century’s greatest illustrators, Mervyn Peake. The archive includes fearsome and funny illustrations for classics such as Treasure Island, The Hunting of the Snark and Household Tales by the Brothers Grimm, as well as illustrations for his own books including Gormenghast, Captain Slaughterboard Drops Anchor and Letters From a Lost Uncle. This newly-acquired archive – also containing juvenilia and unpublished work - joins his literary manuscripts already held here at the British Library, together forming the largest public Mervyn Peake collection anywhere in the world. From completion of cataloguing in 2022 you will be able to research the Mervyn Peake Visual Archive for yourself and there will be opportunities to see the illustrations in upcoming British Library exhibitions, but for now here are a few highlights to whet your appetite and stimulate those research ideas.

One of the undoubted gems of this new collection is Peake’s series of illustrations for Treasure Island, which were published in 1949 and are regarded as some of the finest examples of his illustrative work. It probably helped that Treasure Island was his favourite book from childhood and that he had been poring over the drawings of others, including the anonymous original illustrator, and drafting his own versions since he was a schoolboy (as evidenced by the fact that two watercolour illustrations survive in the archive executed when Peake was only 15). But Peake’s familiarity with the illustrators who went before him was not purely down to childhood fandom. On receiving one of his earliest commissions to illustrate Lewis Carroll’s The Hunting of the Snark in 1941 he set out to learn everything he could from the artists he most admired – from Hogarth and Blake to Cruikshank and Bewick. As a writer himself, he maintained a healthy respect for the authors whose work he was reinterpreting, ‘sliding into another man’s soul’ as he put it and subordinating himself to the story, which perhaps explains why he often chose to show us characters divorced from their setting, leaving it to our imaginations to conjure the action of the story. The results have been highly praised and Peake is credited with reimagining the story and showing us the true evil potential of the pirates (see John Lewis’ The 20th Century Book: Its Illustration and Design). 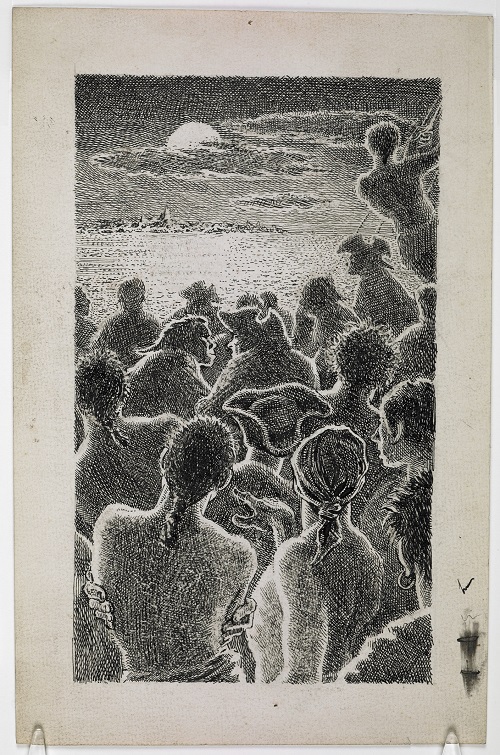 The pirate crew from Treasure Island, 1949. © Estate of Mervyn Peake

These Treasure Island illustrations are also a particularly fine example of Peake’s mastery of the technique of cross-hatching, as you can see from the above drawing of the Hispaniola’s shipmates as they approach Skeleton Island. Elsewhere, his innovative use of closely-drawn broken lines results in the incredible image of Israel Hands falling from the mast with a swirling sea behind him. Part of the rich research potential in this new archive lies in the many preliminary drawings and annotated proofs for Treasure Island which Peake retained, allowing us to trace his creative process in detail as he carefully honed each picture. Too scary for bedtime?

Once dubbed by critics ‘eerie’, ‘sinister’ and ‘quite unsuitable for sensitive children’, it is Peake’s children’s book illustrations that are at the heart of this archive. Peake’s work has thrilled and unsettled children since he started publishing in the later 1930s, sometimes with an outcry from adults who have worried about nightmares and the ‘indelible mark’ left on their offspring. Here is an example from Household Tales by the Brothers Grimm (1946), which again uses cross-hatching to evoke the dark, foreboding atmosphere. 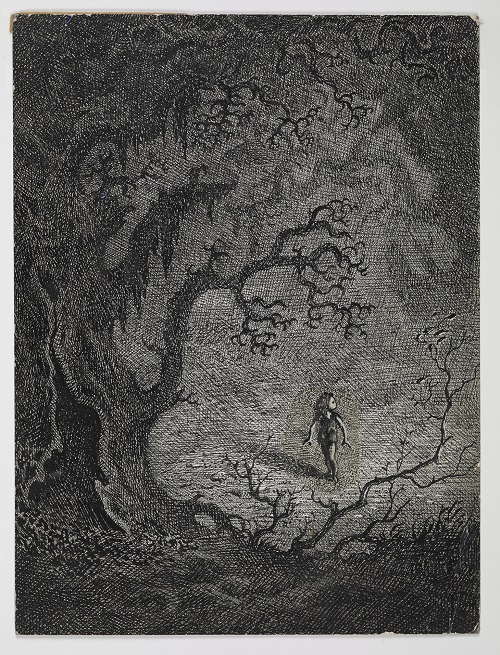 Illustration for 'Our Lady's Child' from Household Tales by the Brothers Grimm. © Estate of Mervyn Peake

For older readers, Peake will be best-known as the author of the Gormenghast books which earned him the status as one of the best fantasy writers of the 20th century. Fans of the series will find ten illustrations of Gormenghast characters in the Visual Archive, including depictions of its hollow-eyed anti-hero Steerpike, the grotesque chef Arabiatha Swelter and the delightfully-named doctor’s sister, Irma Prunesquallor.

The earliest item from the Visual Archive is a drawing by seven-year-old Mervyn, sketched on a Sunday afternoon in China, where he spent his childhood as the son of a missionary doctor. The Peake family returned to England for good when Mervyn was 11 years old but the sights and sounds of his early years were never forgotten. The sense of being an outsider came from living in a walled missionary compound looking like a miniature version of Croydon set down in a distinctly different culture, and it continued on his return to England where there seemed to be no thread linking his two very different lives. Peake’s perspective on Chinese culture and this sense of isolation have both been consistent influences on Peake’s later work, from the ritualised world of Gormenghast to the stylised brushwork of some of his drawings. In the Visual Archive, the Chinese influence can be seen in his juvenilia and also in his exquisite illustrations for an early unpublished book of nonsense, ‘The Moccus Book’, which he produced in the late 1920s from an idea developed with his best friend, Gordon Smith. The pirate who never grew up

The thread running through the entire archive is Peake’s piratical spirit. He was obsessed with pirate stories from childhood, cultivated a piratical appearance and was very fond of jokes and pranks. It is not surprising therefore that Peake went on to write his own pirate tale in the form of his 1939 children’s book Captain Slaughterboard Drops Anchor. Although Peake’s early literary influences reflect the colonial society in which he grew up, it is notable how he could turn these tropes upside down. The bloodthirsty Captain Slaughterboard, for instance, gives up his piratical ways and sets up a cosy, domesticated life on a foreign island with an ambiguously-gendered ‘Yellow Creature’ in what appears to be a very happy queer relationship – marking the picture book out as ‘way ahead of its time’ in the opinion of former Cambridge Professor of Children’s Literature, Morag Styles. The Visual Archive holds the complete set of all 45 final illustrations for this book and you can see a glimpse of an early version of the Slaughterboard story in this beautifully illustrated manuscript from the collection which is available in full on our Discovering Children’s Books site. 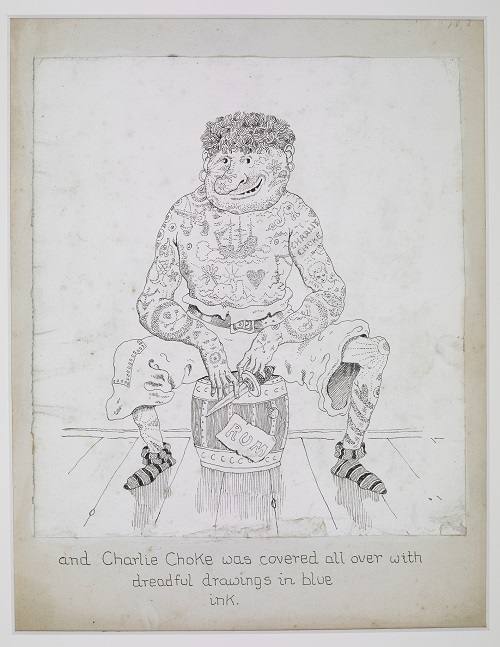 Utlimately, in the fashion of other great writer-artists from Blake to Wyndham Lewis, it is impossible to separate Peake’s art from his writing. To understand his imagination and his synaesthetic creative process as a whole, we need to consider his writing and drawing side by side, and this acquisition will enable researchers to do just that. You can read more about the Mervyn Peake Visual Archive in our press release.

Posted by Eleanor Dickens at 11:19 AM