New Blog Season: Anti-Racism and Excellence in Our Collections and Beyond, editor's comments

by Callum Bartolomeu McKean, Curator of Contemporary Literary and Creative Archives and editor of the English & Drama Blog.

Our new season, Anti-Racism and Excellence in Our Collections and Beyond runs from July-September 2020. If you'd like to get in touch with comments or suggestions, please do so using Twitter with the handle @BLEnglish_Drama.

Owing to the ongoing COVID-19 crisis, some blog posts may be delayed. We hope to stick to a Monday, Wednesday and Friday schedule as outlined below as far as possible, but please bear with us if we're a little bit late.

In response to the murder of George Floyd and recent worldwide protests against police brutality and racial injustice, the Library issued a statement yesterday committing itself to becoming an anti-racist organisation, urging colleagues to push beyond what Chief Librarian Liz Jolly described as a passive ‘non-belief’ in racism towards an active struggle against it in our corporate structure, our collecting policies or our own interpersonal relationships. This is, and must be, a long-term commitment. From the perspective of a blog-editor — attempting to plan out a season of content which reflects on, sustains and even pushes beyond this statement — its commitment to change is encouraging.

The Library has vast collections and deep expertise, but I’d be lying if I said that the task of writing and programming content around these issues wasn’t intimidating. The pressure to get it right is huge — not only, as you might suspect, because of highly-charged social media discourse — but more-so because there is a genuine desire amongst colleagues to do good work. The trepidation around mis-stepping stems mostly from a fear of letting our audiences down. But we can’t be silent either. In the current climate especially, discussions about the value of cultural heritage run a real risk of being hijacked by politically motivated sophistry and bad faith arguments in favour of ‘preservation’. Cultural Heritage professionals, as experts in this area, have a role to play. As statues around the country fall, questions about what constitutes real history — about which monuments and narratives are worthy of prominence, promotion and preservation in our culture —  become more urgent. We should be wary of those who would use calls to ‘preserve our history’ in order to smooth over their own conscience or ignorance; of arguments in which the definitions of ‘our’ and ‘history’ are made narrow enough that nothing except the status-quo might pass through them into posterity.

As custodians of a national collection it is our job to go beyond these calls to preserve totems to existing power structures. We need to engage with our own institutional and national histories in ways that deepen, enrich and complicate our understanding of history. The British Library, like many cultural heritage institutions in the UK and abroad, suffers from a kind of institutional double-sidedness: we are both fundamentally open yet perceived as elitist; progressive yet founded on complex histories of exploitation and exclusion; a nominally gentrifying force in our traditionally working-class district of London yet still one of the few places in the city where you’re permitted to sit without purchasing something. We must face these contradictions head-on and resist the urge to smooth them over.

So what about this blog? It is my conviction as its editor that an anti-racist appraisal of the Library’s literary collections would consider not only the representations within them — how, for instance, people of colour are used as literary devices and symbols across time — but also the material histories of these collections and their standard interpretation: how they were built, by whom, through what means, and to what end. In academic and activist circles this process has been referred to as ‘de-colonising’ the archive, and although much work remains to be done, colleagues are already making these links more visible to our users through clear signposting on the home-pages of some of our most prominent foundational collections. Yet more than this, anti-racism, despite its name, requires positive intervention. We should work to highlight excellence; to emphasise that history is not something that is ‘done to’ people of colour — or to any marginalised group for that matter — but is rather made manifest by their struggles, rebellion, and creativity, which are very often reflected in and enacted through literary and other artistic works. 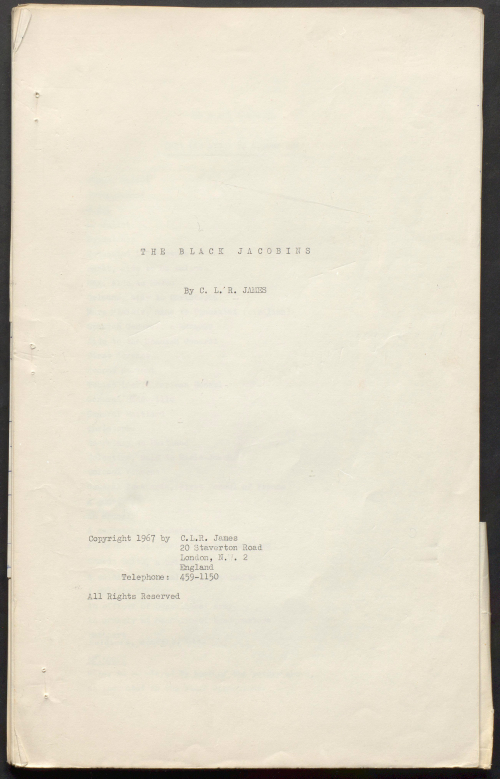 MS 10310: Typescript of CLR James's play 'The Black Jacobins' in which he re-tells the history of the Haitian Revolution in order to foreground the role played by enslaved people, popular alternative leaders and lower-ranking soldiers.

Copyright © Estate of CLR James, reproduced courtesy of the Curtis Brown Group. You may not use the material for commercial purposes. Please credit the copyright holder when reusing this work.

This emphasis is brought to the fore by the celebrated novelist Andrea Levy, whose brilliant essay on Discovering Literature, ‘Back to My Own Country’, reminds us, speaking of Caribbean immigrant communities (and immigrant communities in general) that, ‘their ideas, their creativity and their ways of life have helped turn this country into a sophisticated multi-culture. This windfall of talent and variety is one of the great unforeseen benefits to Britain’. Levy's final call in the piece, that ‘my heritage is Britain’s story too. It is time to put the Caribbean back where it belongs – in the main narrative of British history’ should remind us that, far from being an effort to erase history, contemporary anti-racist struggle emerges from a long and proud tradition of protest and agitation by communities of colour working to broaden history against efforts by the powerful to control the ‘main narrative’. It’s vital that we call upon our collections to draw out these and other continuities, as a recent post from the Library’s America’s Blog has illustrated. I hope we can continue this crucial work over the next few months on this blog with a new long-form post each Wednesday. 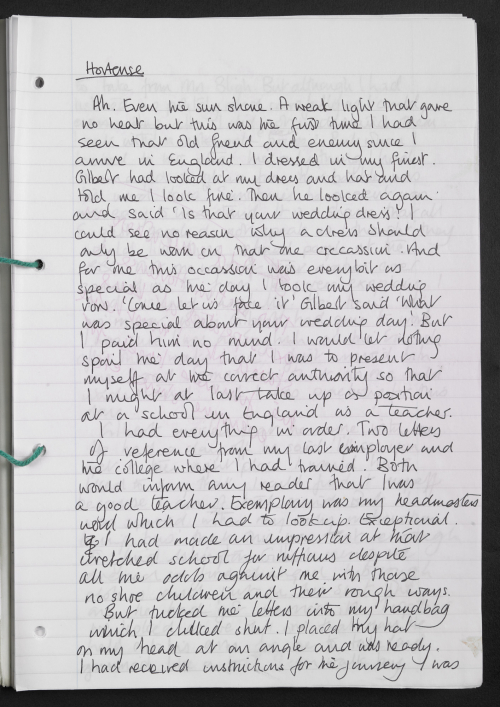 Manuscript draft of Andrea Leavy's Small Island (2004), a novel which interweaves the stories of Jamaican migrants Gilbert and Hortense, their white English landlady, Queenie, and her husband Bernard. The book was partly inspired by Levy’s parents: her father Winston who came to Britain from Jamaica on the Empire Windrush and his wife Amy who followed in November 1948.

Copyright:© Small Island 2004 by Andrea Levy. Usage terms: You may not use the material for commercial purposes. Please credit the copyright holder when reusing this work.

As a curator and archivist it was interesting to see how the reaction to the extreme violence of George Floyd’s murder was initially one of reflection and and self-education, through the black-square social media campaign (we will have to forego criticism of its disingenuous co-option by corporate interests for lack of space, though). The Library, as a repository for ‘The World’s Knowledge’ has a responsibility to contribute to these discussions, through the sharing of its vast resources for wider community interpretation, inspiration and enjoyment. Each Friday, this blog will share resources, links and digitised materials with its readers so that we all might better understand the work that each of us needs to do.

But more than this, as a national Library operating under the legal deposit act, we are a repository for the UK’s small-presses, independent publishers and other community groups. Now more than ever, it is important that we act as an amplifier for these voices. Each Monday we hope to highlight a small publisher whose imprint focuses on black writers and other writers of colour in order to aid wider awareness of the quality and quantity of this work. 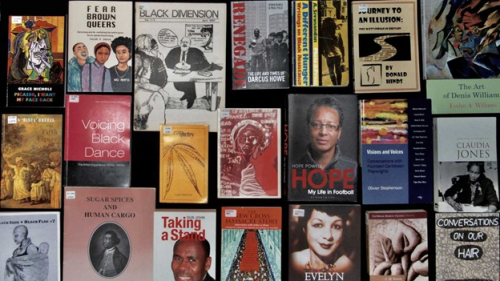 A selection of some of the Library's collection of printed material.

There’s much more to do so if you have suggestions or comments, please get in touch either through the blog or on Twitter. If you have a small-publisher you’d like to nominate for a highlight, please get in touch, or if there’s a particular British Library collection item which you’ve found useful, inspiring or interesting, let us know.

Posted by Eleanor Dickens at 6:40 PM