by Zoe Louca-Richards, Curator of Modern Archives and Manuscripts. Please note that due to work-flow restrictions resulting from Covid-19 action this material may not be accessible via the reading rooms until later in the year. 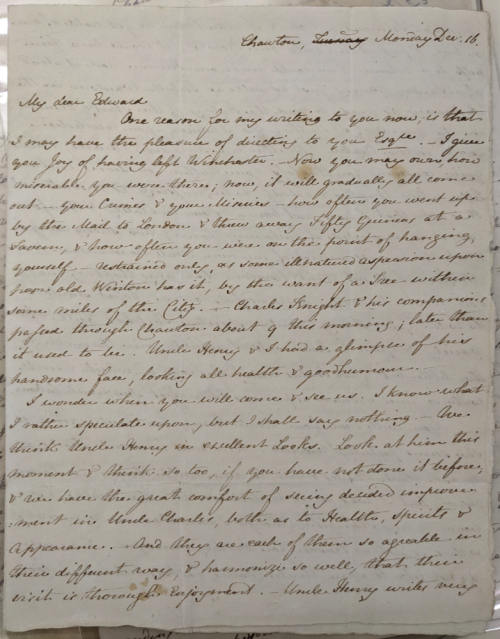 “What should I do with your strong, manly, spirited Sketches, full of variety and Glow? – How could I possibly join them on to the little bit (two inches wide) of Ivory on which I work with so fine a Brush, as produces little effect after much Labour?” Jane Austen

After being on long loan to the British Library for over 80 years, the letter in which Jane Austen made the above famous remark has been acquired for permanent addition to the nation’s literary collection. The letter to Austen’s nephew, James Edward Austen Leigh, was originally placed on loan to the British Library in 1936 by Austen’s descendants as part of Loan MS 19, and has now been purchased through a generous grant from The Collections Trust. It is one of approximately 160 surviving letters by Austen, of which only a small portion are addressed to those other than her sister Cassandra. The remainder of Austen’s life correspondence is thought to have been destroyed by Cassandra shortly after Austen’s death. The surviving few are a meagre remnant of this literary great: they offer only the faintest glimpse into the life that produced so many of our best known classics. Each of her extant letters has been repeatedly scrutinised and discussed. However, this letter in particular, previously published as Letter 146 in Deirdre Le Faye’s Jane Austen's letters (1995), is perhaps one of the most widely referenced of them, on account of the above quote, making it a valuable addition to the British Library’s literary collection. 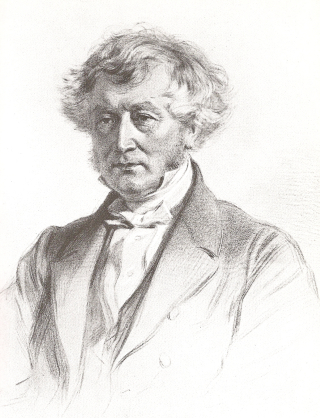 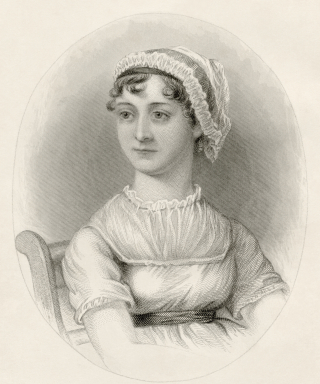 James Edward Austen Leigh, known by family and friends as Edward, and addressed here by Austen as ‘E’, was the son of Jane Austen’s eldest brother, also James. James (Jr.) had recently turned 18 when he received this letter from his aunt, and her opening line, ‘One reason for my writing to you now, is that I may have the pleasure of directing to you Esqre’, offers a playful quip on his recent transition into manhood. James was an aspiring novelist himself, and at the time of the letter had just left Winchester College to begin as an undergraduate at Oxford. James would later publish A Memoir of Jane Austen (1869) the earliest biographical account of his aunt, and the only one to be written by someone who knew her. It wasn’t published until 50 years after Austen’s death, and James himself had concerns as to his ability to do justice to such a task. You can learn more about James’ memoirs of his aunt through the British Library’s Online Exhibition Discovering Literature: Romantics and Victorians.

James is often referenced as Austen’s ‘favourite’ nephew. Letters to her sister Cassandra, indicate her active support and encouragement for his writing ability from a young age. James too spoke fondly of Austen. In his memoir of her he notes that she ‘was the delight of all her nephews and nieces’ and ‘that there was scarcely a charm in her most delightful characters that was not a true reflection of her own sweet temper and loving heart’.

Austen's quote comparing her work to the art of miniature painting. Add MS 89437

Early in the 4 page letter Austen notes that she is dismayed to learn that two and a half chapters of James’ own work have gone missing; extending a witty relief that her recent prolonged absence from Steventon cannot render her under suspicion of theft. Her famous remark comparing her work to the delicate and intricate art of miniature painting follows. This introspective comment from Austen regarding her craft has been the subject of much speculation and interpretation by scholars and Austen fans alike. In bashfully attesting to what little value such a theft would have, the fruits of which baring no possible benefit to her own works, Austen seems simultaneously to rib and praise both James’ work, and her own. The quote’s jocular undertone is often read as a subtle reminder to James that compared to her he was but a novice of the pen. Furthermore, ’so fine a Brush, as produces little effect after much Labour’ has been suggested to indicate Austen’s own anxieties about the laborious nature of her art. The quote is frequently highlighted as a rare use of metaphor by Austen, a literary device often seen lacking in her published works.

“But I was forced to decline it, the walk is beyond my strength (though I am otherwise very well)". Add MS 89437

Austen wrote the letter on her 41st birthday, which would sadly be her last. Whilst she does make a brief comment on her poor health, noting the decline of an invitation as ‘the walk is beyond my strength’,  the cheerful, light-hearted tone of the letter gives little impression that Austen had been battling with illness throughout the year, or indeed of an awareness that she would not last her 42nd birthday. A later letter written in January 1817 to her sister Cassandra notes that she had gained strength throughout the winter of 1816. Never the less, Austen died the following July. The exact cause of her death is still a matter of contention; Austen’s biographies alternate most frequently between a posthumous diagnosis of Addison’s disease and Hodgkin’s Lymphoma – neither of which were recognised during Jane Austen’s lifetime – both also unfortunately untreatable, and both ultimately fatal.

This letter (Add MS 89437) joins another, also formerly from Loan MS 19, to her sister Cassandra (Add MS 70625) - accessible online on Discovering Literature - which was purchased by the British Library in in 1990. Five of the original seven letters loaned to the Library have now been sold (including the two purchased by the Library), and the remaining 2 letters are still on loan as Loan MS 19.

In addition to the aforementioned letters, the British library also holds Austen’s writing desk and a number of other fascinating Austen manuscripts, including:

Posted by Eleanor Dickens at 3:31 PM