Imagining Aliens and Looking for the Invisible: Imperialist Legacies in Science Fiction

by Callum McKean, Curator of Contemporary Literary and Creative Archives.

Science Fiction can’t help but look backwards. Whether flying starships across the galaxy or warring with exotic extra-terrestrials, it struggles to escape the gravitational pull of the nineteenth century and the imperialist, expansionist logic from which it emerged. This shouldn’t surprise us. How could a genre which deals in technologically driven exploration, reportage of distant cultures, and ideas of the ‘alien’ escape such a pull? In many ways, nineteenth century exploration narratives which trade on their own realism actually pre-empt the bombast of modern and contemporary sci-fi: “In the same way one of you might believe there are inhabitants in the planet Mars”, wrote Conrad in Heart of Darkness — himself drawing upon the Dark Africa trope established by writers like Henry Morton Stanley in Through the Dark Continent (1878) —“We were wanderers on a prehistoric earth, on an earth that wore the aspect of an unknown planet". Where does such a comparison lead? In the science fiction anthology Future Earths: Under African Skies (1993), editor Mike Resnick asserts that “while Africa has lost some of the mystery and romance […] it now provides thoroughly documented examples of some of the most fascinating people and societies any writer, searching for the new and the different and alien, could hope to find”. Resnick asks us at last, “is there anyone out there who still thinks Africa isn’t alien enough?” We might answer either way, depending on our personal background, but to imagine that Africa is fundamentally and not merely contingently 'alien' is surely a retrograde move for anthology purporting to show us 'Future Earths'. 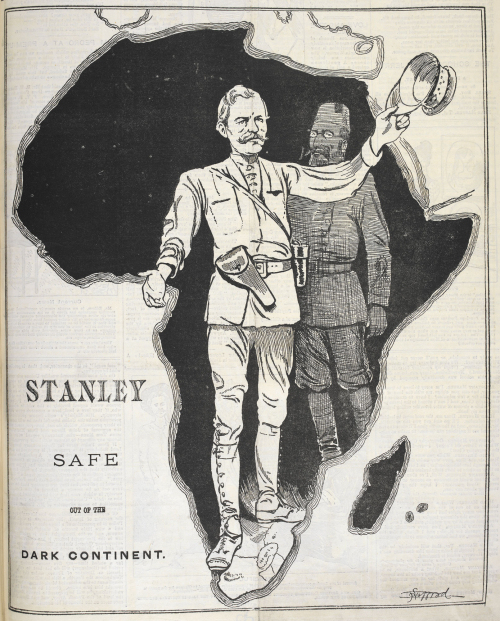 It might seem obvious, but the ‘exotic’ is a feeling, not a quality inherent to any place, object or people. Everything is local and quotidian to some people and exotic to others. This is why there are two rivers in Heart of Darkness: the Thames, which is explicitly named and known, and the Congo, which is not and so remains radically unknowable. Through use of a frame-narrative, Conrad takes his readers on a journey through ‘Darkest Africa’ whilst bobbing quietly on a boat anchored securely to a London dock. This is the promise of all travel narratives, and possibly the promise of most science-fiction too; travel from the comfort of your own chair, or culture. “Nothing is easier for a man”, Conrad's narrator tells us, “than to evoke the great spirit of the past upon the lower reaches of the Thames. The tidal current runs to and fro in its unceasing service, crowded with memories of men and ships it had borne to the rest of home or to the battles of the sea”. London’s great river is readable — dense with nouns, famous names and recorded battles. The unnamed Congo is its shadow, “like traveling back to the earliest beginnings of the world, when vegetation rioted on the earth and the big trees were kings. An empty stream, a great silence, an impenetrable forest”. 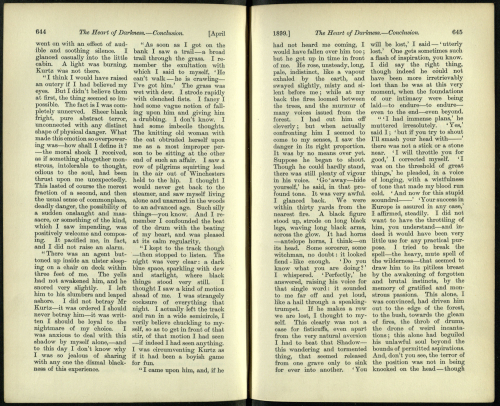 Heart of Darkness by Joseph Conrad as it first appeared in Blackwoods Magazine 1899
Shelfmark: P.P.6202.

But despite Conrad's imagination, the Congo is not a deeper past, it is not "the earliest beginnings of the world", but rather a coexisting — yet different— present. This idea of relativity is one that Chinua Achebe brings to the fore in his highly influential essay on Conrad's novella where, re-calling a discussion with a young American student about Africa, Achebe wonders why this young man “is obviously unaware that the life of his own tribesmen in Yonkers, New York, is full of odd customs and superstitions and, like everybody else in his culture, imagines that he needs a trip to Africa to encounter those things”. The Thames is a strange river too. Reading Achebe, I was struck by memories of my time spent working on the Library’s exhibition, Windrush: Songs in a Strange Land (2018), where I was tasked with selecting oral history recordings of Caribbean migrants newly arrived in Britain (I wrote a blog about it). Among other things, speakers described their disappointment at Buckingham Palace’s drab grey exterior, how they thought houses with chimneys were factories, how they were disgusted by the truly alien practice of eating fish and chips from newspaper.

Science fiction offers opportunities to explore these ideas of cultural relativity. Ursula K. Le Guin, for example, was keenly aware of the arbitrary relationship between the exotic and the everyday. She writes about her parents’ (both anthropologists) relationship with Ishi, the last known member of the Native American Yahi people from present-day California. Like Conrad’s Congo, Ishi has no true name, owing to a deeply held belief among his people that names were sacred and could only be shared by a third-party. As the last of his tribe, he took on the default name of the Yahi word for ‘man’ — Ishi. Le Guin describes learning about how her native California was made and unmade, named and unnamed by its successive inhabitants:

What the Whites perceived as a wilderness to be ‘tamed’ was in fact better known to human beings than it has ever been     since: known and named. Every hill, every valley, creek, canyon, gulch, gully, draw, point, cliff, bluff, beach, bend, good     sized boulder, and tree of any character had its name, its place in the order of things. An order was perceived, of which the     invaders were entirely ignorant. Each of those names named, not a goal, not a place to get to, but a place where one is: a     center of the world. There were centres of the world all over California.

Questions about relative ‘centres’ have proved difficult but crucial for understanding science-fiction writing across time. Early on, as with the first chapter of H.G Wells’s seminal novel The War of the Worlds (1898), readers were called upon to engage in a kind of sympathetic de-centring, to ‘remember what ruthless and utter destruction our own species has wrought […] upon its own inferior races’, and question whether we are, ‘such apostles of mercy as to complain if the Martians warred in the same spirit?’ These kinds of rhetorical questions have not proved particularly useful in hindsight. In some ways they demand too little of us — they keep the strict hierarchies intact and merely add one extra rung on the ladder above us, without ever questioning the logic of inferiority and superiority itself, or ever forcing us to engage with the intricacies and complexities of any particular cultural difference. Even if we assume that Wells’s reference to ‘inferior races’ is loaded with enough irony that we can look past it (and I’m not saying we should), what we’re left with is a call to engage with injustice as solely motivated by fear: it could be us in the inferior position next, so our responsibility as a benevolent caretaker is to be kind-hearted, just incase. 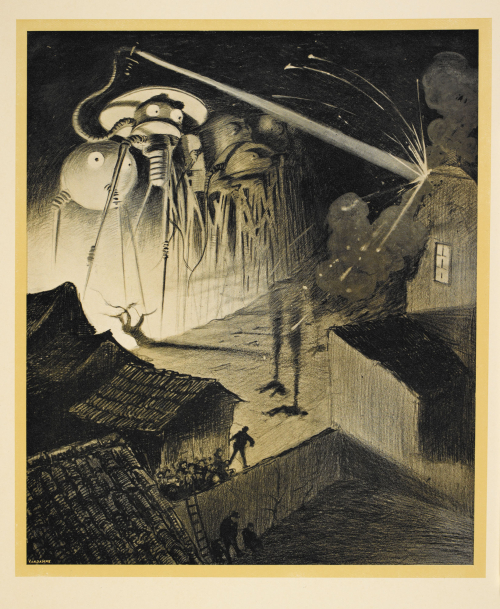 Something else is at work in War of the Worlds too. There’s a strange kind of pleasure that that comes from witnessing the purely aesthetic obliteration of civilisation in fiction. Contemporary disaster movies — of which the modern re-imagining of War of the Worlds (2005) starring Tom Cruise is one —demonstrate this more clearly than any other medium. But even when skyscrapers are toppled, nuclear bombs are set off, and martians attack, not everything is destroyed. What’s left over is often more revealing than what’s lost. In J.G Ballard’s novel The Drowned World (1962), for instance, it is with the crew’s encounter with the submerged Leicester Square in the final chapters — exclaiming “But it’s all so hideous. I can’t believe that anyone ever lived here. It’s like some imaginary city of Hell” — that the decentring takes place. What survives beyond this drowned world are racial hierarchies and animalistic descriptions that call back to science fiction's origins. Big Caesar, a pilot for the protagonist Strangman, is variously described as a “huge humpbacked negro” a “grotesque parody of a human being”, and a “giant hunch-backed mulatto”. Should we believe that these descriptors, hierarchies and stereotypes are so fundamental that they can survive the end of the world as we know it? 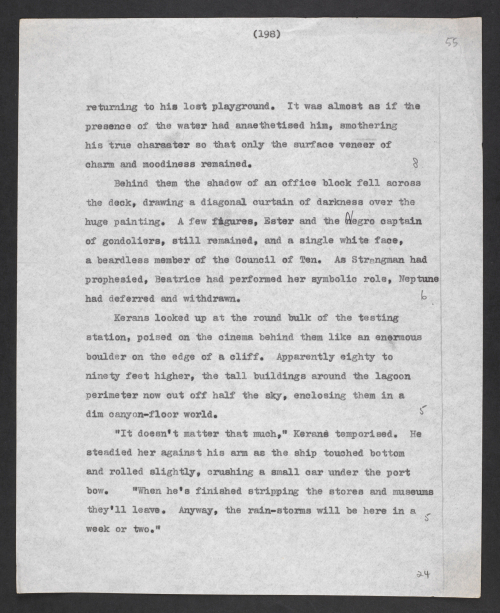 Typescript draft of The Drowned World, by J. G. Ballard © J. G. Ballard. Reproduced by permission of the J. G. Ballard Estate. All rights reserved. You may not use this work for commercial purposes and the copyright holder must be credited. Shelfmark: Add MS 88938/3/4

For black science fiction writers there is often frustration at this lack of imagination; exasperation that, as Charles R. Saunders writes “A literature that offered mainstream readers an escape route into the imagination and, at its best, a window to the future could not bestow a similar experience for black and other minority readers”. Recent efforts to collect and anthologise black science fiction have gone some way into helping us to interrogate these failures further — and to gesture towards ways in which they might be addressed. Unlike the aforementioned anthology, Future Earths: Under African Skies (1993) which took the idea of Africa as its exotic object, Dark Matter: A Century of Speculative Fiction from the African Diaspora (2000) is an example of a contemporary anthology which attempts to amplify the voices of the African diaspora themselves, as subjects. 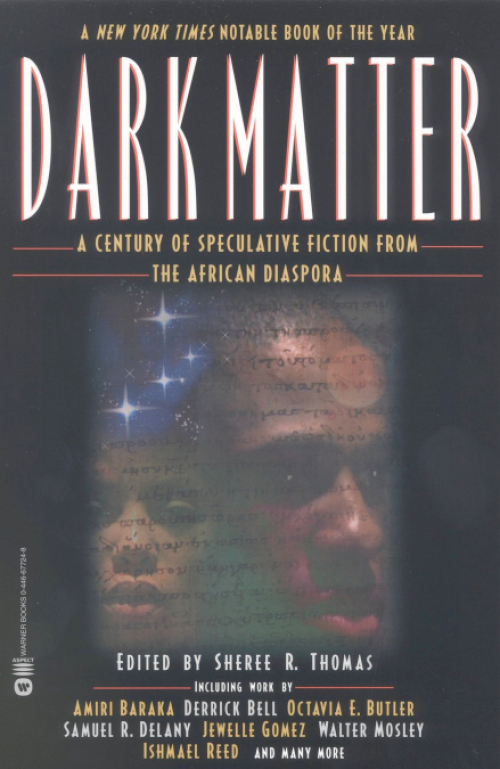 Other stories take on more personal concerns, especially in regards to the body as a highly politicised site of resistance and compliance. In Nalo Hopkinson’s ‘Ganger (Ball Lightning)’ (2000), for instance, the two main characters experiment with the use of a new kind of sex-toy wet-suit which is sold as ‘consensual aid to full body aura alignment’ but is dismissed as ‘Psychbabble’ and produces only a ‘dampened sense of touch […] like being trapped inside your own skin, able to sense your response to stimuli but not to feel when you had connected with the outside world.” After a terrifying ordeal where the suits become autonomous, it is only after they’re destroyed — building to a the moment of tenderness and clarity which concludes the story — that the characters can finally stop ‘talking around stuff rather than about it" and that ‘blackness’ is finally acknowledged, only to be embraced, ending in a moment of real, suit-less ‘touch’. Octavia E. Butler’s contribution, ‘The Evening and the Morning and the Night’ (1987) is a strange kind of love story too, where a genetic ‘abnormality’ consigns its sufferers to a life of institutionalisation and self-destruction and the two protagonists — both of whom suffer from the condition — find their place among the sick, administering care.

Butler’s fascination with fatalism and genetics is, as she explains in the epigraph, no accident. The attention, complexity and tenderness with which she treats such questions, though, emerges from an awareness of the pernicious ways in which these concepts can be used and a determination to illustrate ways out of their seemingly incontrovertible bind. In this way Butler’s story is typical of Dark Matter as an anthology that revels in its own unwillingness to offer conclusions; that seeks to forego thematic and stylistic consistency in favour of variety, imagination and possibility. If the travel narratives of the nineteenth century endeavoured to chart, describe and report back on the exotic — to make it known to us in our own terms — Dark Matter, as the title suggests, is about gaps and invisible forces; about the strangeness that’s everywhere and that holds everything together. It's not a contradiction to say that science fiction can do that too.

Posted by Callum McKean at 5:25 PM