The Manuscripts of Thomas Chatterton

A guest-blog by Daniel Brass, Kings College, London. The British Library houses many items of significance with regard to Chatterton’s life and works. These include autograph manuscripts of his poetry, written correspondence between Chatterton and Walpole, and letters and articles from the 1770s documenting the Rowley manuscripts controversy, all of which are available to view, for free, in our Reading Rooms.

Thomas Chatterton was just seventeen years old when he took his own life on 24 August 1770. This year, 2020, marks the 250th anniversary of his death. Whilst some of his poetry was published during his lifetime, Chatterton received little remuneration for his efforts and he was impoverished at the time of his suicide. His writing gained a newfound recognition in the years directly following his death, however, and exerted a considerable influence upon the Romantic Movement as well as sparking academic controversy. The Death of Chatterton, 1856,
by Henry Wallis (Tate Britain, London)

Born on 20 November 1752, Chatterton was an incredibly well-read child who began composing original works at the age of ten. Inspired by his reading, Chatterton soon invented the persona of Thomas Rowley – a fictional 15th-century monk. Chatterton claimed that his poetry, which adhered to a faux-medieval style, was actually the work of his imagined Rowley. So convincing was Chatterton’s deceit that, following his death, his poetry was included in an anthology of medieval writings, with Thomas Rowley’s name gracing the work’s title. An academic debate regarding the origin and authenticity of these poems raged throughout the 1770s, with the deceit eventually being discovered and Chatterton’s ‘Rowley’ works eventually seeing publication under Chatterton’s own name. 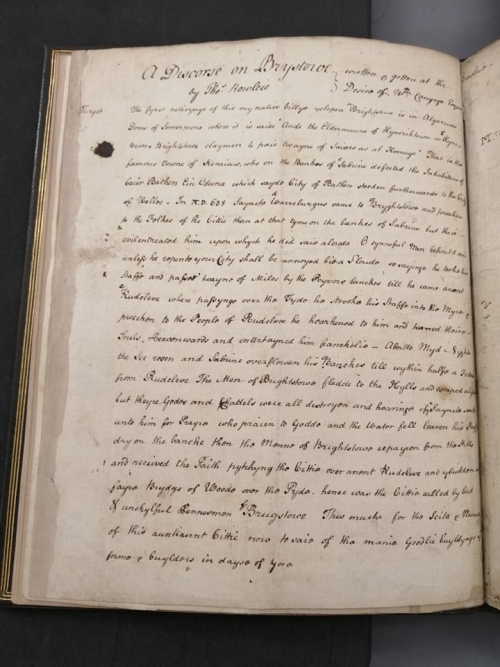 Add MS 24891 “A Discorse on Brystowe” – one of Chatterton’s forged Rowley documents, chronicling the history of Bristol

Chatterton also supplied the antiquarian William Barrett with forged documents. Barrett, believing the manuscripts to be genuine, relied heavily upon them when compiling his work The History and Antiquities of Bristol. Published in 1789, long after Chatterton’s death, Barrett’s work was poorly received due to the embarrassing inclusion of the poet’s fabrications.

During his lifetime Chatterton sought patronage on several occasions and used his literary fabrications to gain access. Horace Walpole expressed an interest in Chatterton’s writings, which the poet stated were transcriptions of Rowley’s work. Walpole was not convinced and ultimately rejected the young poet as he suspected that the manuscripts were of a more modern origin than Chatterton claimed. 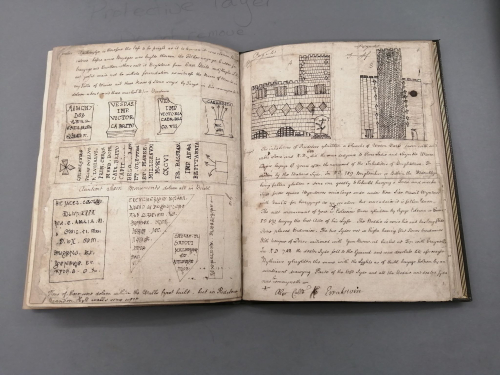 At the age of seventeen, Chatterton moved from Bristol to London with the aim of supporting himself financially through his writing. His time in London was short – he lived there for just four months prior to his death – but he wrote voraciously during that period. He composed journalistic pieces, political satires and poetry. Writing under his own name and a series of pseudonyms, Chatterton successfully achieved publication for many of his works in literary journals and magazines. Yet, despite his increasing success as a writer he continued to struggle financially. Chatterton died from an overdose of arsenic and opium on 24 August 1770. It is generally accepted that suicide was Chatterton’s intent though some have argued that the overdose which resulted in his death may have been accidental.

Although branded a literary fraud, appreciation for Chatterton’s works grew significantly in the years following his death. The talent he showed in the composition of the Rowley manuscripts was later properly appraised and appreciated and he began to be taken seriously as a gifted artist in his own right. In particular the Romantic poets venerated him as a misunderstood, tragic genius. He was praised by the likes of Coleridge, Shelley, Wordsworth, Keats, Byron, and Scott who all cited him as a poet of exceptional talent.

The British Library holds a number of manuscripts created by Thomas Chatterton, some of them he passed off as by the fictitious Thomas Rowley. These include:

Posted by Eleanor Dickens at 3:00 PM