A Jewish refugee child of Polish origin, who escaped to England in 1939 from Cologne under Nazism, without any spoken English, left a remarkable legacy to international literary and cinematic culture.

Ruth Prawer Jhabvala’s contribution is celebrated along with many prominent Jews in the biographical dictionary of the Jewish Lives Project within the Jewish Museum in London. Her literary archive, thanks to her bequest, is housed at the British Library. Within this collection are hand-written notebooks, scrapbooks, printed typed drafts, digital material and letters. These relate to her 13 published novels, over 100 short stories (some unpublished), several plays and nonfiction articles. Her scripts and screen play archives (21 in total) are housed in the USA.

Ruth Prawer Jhabvala recounted her Cologne childhood memories of being called a “dirty Jew” and chased by other German children in 1983 profiles and interviews. She remembered the notices on the city’s cinemas which stated, “Jews are not desired”. In 1934, the year after she started school, she witnessed the Nazis parade past their apartment before Nazi troops came to arrest her parents who were taken into protective police custody. She spoke of walking to her segregated Jewish school in 1938 past gangs smashing windows, and how once friendly shopkeepers “grew very cold and turned away from you”. She told Harriet Shapiro in 1987: “Other children would scream after us and throw stones”.

Ruth Prawer fled with her father Marcus, mother Eleanora and brother Siegbert, by the “smallest fluke” in April 1939, when US visas were declined, and they found Polish-born sponsors in Coventry. They later discovered, that at least forty of their relatives had perished. When Ruth Prawer was twenty-one and a student at Queen Mary College, London (1948), her father committed suicide. She later emigrated to Delhi, after she married the Parsi architect Cyrus Jhabvala in 1951, where she spent the next 25 years before moving to New York in 1976.

Jhabvala told Dorothy D. Horowitz in an interview for Oral History how she constantly wrote stories as a child, in German, about Jewish life and with settings based on an imaginary Palestine; but “I can’t recall a single one”. Her mother was accused by her school of writing the stories and these were read out loud in the house of her grandfather, Elias Cohn, a bass Ober-Kantor at the conservative synagogue in Cologne. But, she recounted, someone threw these stories away and no-one thought to keep them.

The British Library has the photocopies of her first two published stories in her English school magazine Microcosm, ‘Der Fuchs un der rabe’ (1939) and ‘The Wonder Pot’ (1940). The copies were posted to Jhabvala in 1987 by the friend who had shared a childhood bedroom with this refugee stranger in Coventry in 1939. The letter attached to them said: “Herewith proof of your early promise–so elegantly fulfilled”. 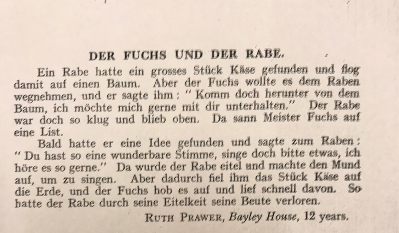 In 2005 Maya Jaggi explained how other writers described Jhabvala’s skill and ability in terms of her unique outsider perspective. Caryl Phillips identified her postcolonial positioning: “She understood loss of language, land and history in a brutal and visceral way, and reinvented herself…”

Jhabvala told a Canadian radio interviewer in 2012 when asked about the link between her refugee background and her ability to detach herself from the subjects of her work:

I’m not interested in who am I, … I’m interested in what’s gone, the disinheritance, what I’ve     been able to become or learn or fuse with or not fuse with. A certain freedom comes… I like it     that way.

The lecture which she gave on receipt of the Neil Gunn Fellowship awarded by the Scottish Arts Council in 1979 tackled this topic and was published in Blackwood’s Magazine under the title ‘Disinheritance’.  In it, she distinguishes the loss of “ancestral memories” from what she sees as inherited craftsman’s tools, which “were given, gifted to me, happened to me”. The drafted plans for the lecture clearly delineate her life into distinct phases. 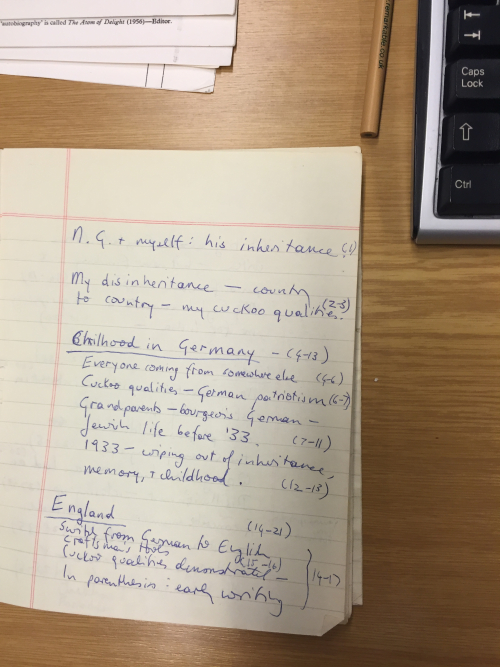 Jhabvala worked at her craft with a daily routine of morning writing and was driven by inner confidence and resilience. An annotated typed piece entitled ‘Why I Write’ (undated) from the archive, reminiscent of George Orwell’s 1946 essay, illustrates this. It may have been written after 1976, as the final page addresses her last writing phase. She describes “the double spur” of inner and outward ambition and the increasing thrill that writing brings. Yet the assuredness and self-reflection on how Jhabvala the writer was formed is balanced by a self-critical voice, one which speaks after completing every story or book : “I didn’t get it right…” and then a persistent: “let me try again, and again, and again”. 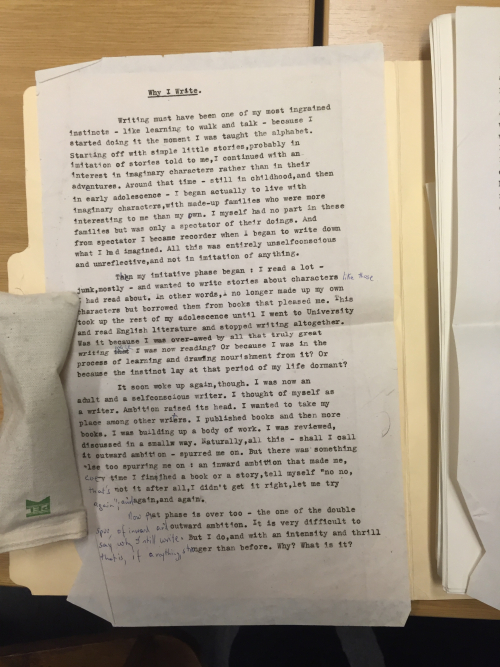 Jhabvala never mentions screen writing here. If ‘Why I Write’ is dated close to the papers with which it was packed (1980-1983) she had already written five screenplays by then, all set in India, and had adapted both Henry James’ The Europeans (1979) and Jean Rhys’ Quartet (1981). Her inspiration for screen writing was always literary and she admired those artists who shared this influence in their work, most of whom had a deep rootedness in their own soil, something which, for her, was absent.

When discussing her favourite Satyajit Ray film, Charulata, based on the Rabindranath Tagore novel, this ambition features:

All great works stimulate a hopeful emulation that ends occasionally, as in the films of Satyajit Ray, in radiant success —     ensuring the business of influence and inspiration that makes us all try and try and try again.

Ray supervised the music production of Jhabvala’s first Merchant Ivory adaptation of her novel The Householder (1963), he re-cut the film, and his cameraman directed the photography. James Ivory also recalls her saying “Let’s climb a big mountain” when she wanted them to make EM Forster’s Howards End (the adaptation which won her one of two Oscars in 1993).

Jhabvala, who died in 2013 in New York, had no ambition or desire to return to Cologne. In the ‘Disinheritance’ essay she speaks about her feelings after twenty-four years in India: “a terrible hunger of homesickness that I cannot describe it was so terrible, so consuming”. She articulates it as a desire for no specific ‘home’ but for a generic Europe, where people spoke, thought, and looked like she did. New York provided this homecoming for her in 1976, because it seemed like a bucolic Europe, reaching backward and “untouched by the events of the 1930s and 40s”. When Bernard Weinraub interviewed her in 1983 for The New York Times Magazine she explained: “To anyone of my generation… Europe now does smell of blood”.

Once a Refugee, Always a Refugee

“A person is only forgotten when his or her name is forgotten” (the Talmud). This quote is cited by Gunter Demnig, the Cologne artist, as the inspiration for his work. He remembers those who fled, were deported or murdered as victims of Nationalist Socialism, by installing commemorative brass plaques in the pavement in front of their last address of choice. These stolpersteine (‘stumbling stones’) now exist in 2,000 locations, and the 75,000th was placed in Frankfurt in December 2019. The stones give individual names to those considered “subhuman” by an ideology which promoted Aryan racial purity, one that propagated Fascist movements right across Europe.

In September 2019, Ruth Prawer Jhabvala’s daughter Ava Wood and I went to Cologne where four stones were being laid in memory of the Prawer family, commissioned by the generosity of a local art gallery owner, Norbert Arns and his book group. This group, formed in 2013, were reading Ishiguro’s Remains of the Day in May 2019, when a member, Thomas Schuld, Director of the Edith Stein Archive, realised that Prawer Jhabvala who adapted the novel for the screen was a former resident. They researched the family and discovered the great achievements of both Ruth and her brother Siegbert, a scholar and Professor of German and Comparative Literature; located their last known address from the City council’s registers, and traced family members.

Our very brief visit was to a city which none of the Prawers would have recognised. The book group’s hospitality included; visits to the Jewish Cemetery gravestones of Ruth Prawer Jhabvala’s grandparents, to the original site of the orthodox synagogue on Glockengasse, which was razed in 1938 during Kristallnacht, where now sits the opera house, and a personal tour of the Roonstrasse synagogue with Boris Rothe.

On the morning of 26th September 2019 four granite setts with brass plates fixed on top, hand-engraved by the craftsman Michael Friedrichs-Friedländer, were silently and swiftly laid by Gunther Demnig outside a five-storey 1950s building on 35 Hochstadenstrasse. We witnessed a moving but simple tribute with some residents, the book group members and passers-by, in the drizzling rain. These stones were the first four of 50 that were laid later that day in Cologne. Among other groups considered ‘a-social’, whose names will not be forgotten, are Roma and Sinti gypsies, Jehovah’s Witnesses, homosexuals and disabled people.

The stolpersteine are not always welcome and some Jewish leaders and groups consider them disrespectful, while a few residents find it distasteful to have such painful reminders outside their front doors. Munich has only permitted wall panel memorials as alternatives. It seems to me, that the humility of bowing down to honour the victims of persecution as we stumble upon them has its own dignity; a dignity not offered to other victims of perpetrators of injustice, the offenders honoured with statues, and to whom we look upwards as we walk under their shadows.

Ruth Prawer, who was almost twelve when she left Cologne, could only dream of being the writer she would become, but Cologne now remembers her and her family as survivors who fled from what was their home. These memorials, created and placed with respect by human hands, and stumbled on by human feet, carry the name she was born with next to those of her dearest, thanks to the generosity and humanity of strangers. 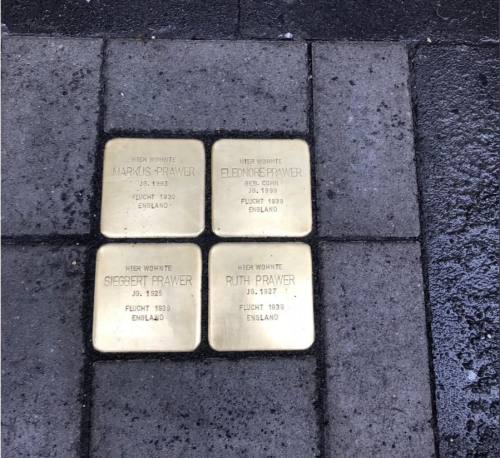 Shapiro, Helen. ‘The Teeming Imagination of Novelist Ruth Prawer Jhabvala is Her Window on a World She Avoids’.  People, September 28, 1987, 48–53.

Posted by Eleanor Dickens at 2:08 PM