‘A Dittie most Excellent’: Catholic songs and poems from time of King James I

by Tabitha Driver, Cataloguer Modern Archives & Manuscripts. Add MS 15225 is a collection of largely religious songs and poems, many on Catholic themes, dating from the early years of the 17th century. It has now been made available online through the British Library’s Digitised Manuscripts, as part of the Heritage Made Digital programme’s project to digitise the Library’s collection of Tudor and Early Stuart manuscripts. An introduction to the project can be found here.

The contents of the quarto sized volume are written in a cursive secretary hand, probably by a single writer. Some of the pieces take a moralising tone, while others are broadly Christian in character, but it is quite clear from several of the songs that the compiler was a Catholic (e.g. “A songe of foure Preistes that suffered death at Lancaster” ff. 31r–33r). It has been suggested that the volume was compiled at Birchley Hall, Lancashire, home of the Catholic Anderton family. The collection is of particular interest for the study of Catholic recusancy and the role that music played in the clandestine practice and dissemination of the faith, at a time when being a Catholic or harbouring a Catholic priest were treasonable offences in England.

Just as is the case with most printed broadside ballads, the words of the songs are presented without any musical notation. They were set to popular secular tunes which would have been familiar to both singers and audience. For instance, “A dittie most excelent for euerie man to reade, that doth intende for to amende & to repent with speede”, was to be sung to the tune of “A rich merchant man, or, John come kiss me now” (ff. 56r–58r). This tune was used for several ballads, several of which can be seen and heard in the online English Broadside Ballad Archive.  Despite their profane connotations these melodies had the benefit of instant recognition and ease of assimilation and may have added an element of good cheer to the performance. 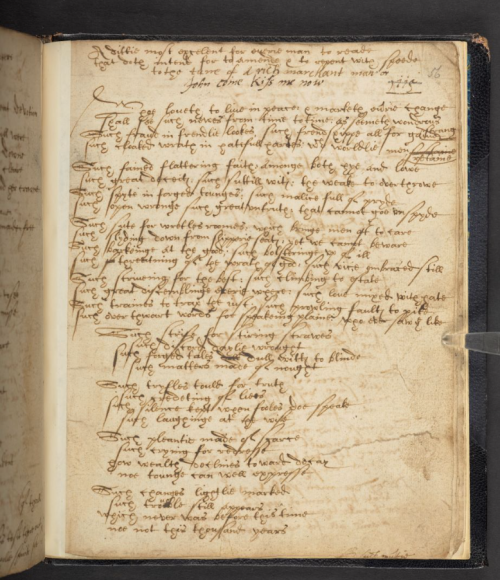 A dittie most excellent for euerie man to reade that doth intend for to amende & to repent with speede, to the tune of a rich marchant man or John come kiss me now. Add MS 15225 f. 56

Some of the songs have identifiable authors, and date from earlier decades. For example, “My mynde to me a kyngdome is”, by Sir Edward Dyer, f. 43, was first published as two separate songs in William Byrd’s Psalmes, Sonets & Songs (London, 1588); and “A song in praise of a Ladie” (“Giue place, yea ladies, and be gone”), by John Heywood, f. 16v, was previously published in Songes and Sonettes, edited by Richard Tottel (London, 1557). 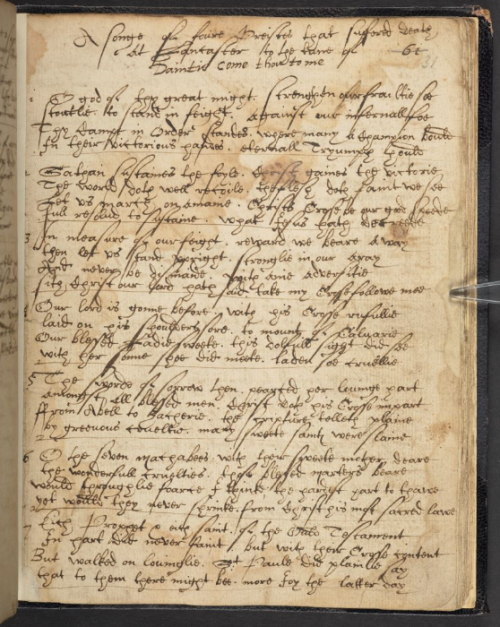 A songe of foure Preistes that suffered Death at Lancaster to the tune of Daintie come thou to me. Add MS 15225 f. 31

Besides martyr ballads, the collection includes a Christmas carol (f. 47v), poems focusing on the passion of Christ, and the believer’s readiness for suffering, as well as simple verses suitable for children’s religious education. “In dayes of yore when words did passe for bands” (ff. 29v-30v) is a satirical attack on puritans which takes particular delight in targeting the puritan women (“Rachell, Maud, Jane, Doll and Grace, / Kate starchèd with a Ruff half an inch longe; / and Mistris Mince-pepin with her mumpinge face”), whose “puer, unspotted” ways are a hypocritical cover for lasciviousness.

The volume was purchased on 18 June 1844, at the sale of manuscripts belonging to the deceased antiquarian Benjamin Heywood Bright (1787-1843). Bright’s remarkable collections (including many treasures which have ended up in the British Library) were dispersed in three sales from 1844 to 1845, of which this was the first. The Gentleman’s magazine reported the sale in detail the following month, censuring Bright for alleged “dog in the manger” secrecy over his hoard of treasures, and rejoicing that many items previously hidden from sight were now publici iuris, “safely brought to an anchor in the National Collection” (the British Museum library). 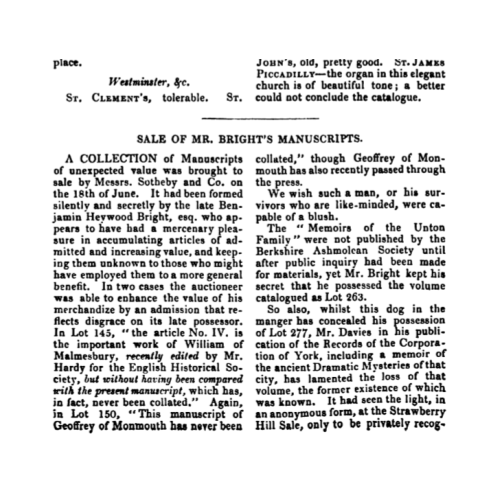 Now not only is Add MS 15225 safely made fast in the national library but it is available freely online. The Gentleman’s magazine would certainly have approved.